Captain of the Belligerent
Queen of the Golgari

Guildleader of the Golgari

Murdering targets that interest her

Vraska is a gorgon Planeswalker from Magic: the Gathering. She was one of Jace Beleren's deadliest adversaries, one of Ravnica's most lethal assassins, and one of Nicol Bolas's most useful servents.

For most of her youth, Vraska lived an average life for a gorgon in the Golgari Swarm. But, this peace was disturbed thanks to guild politics. Due to numerous murders attributed to members to the Golgari, the Azorius Senate issued a writ of mass arrest to any members of the Swarm. Vraska was one of the unlucky members to have been apprehended and was sent to an Azorius compound. With so many members of the Golgari being sent to this prison, it became overcrowded and a riot broke out. Vraska and her cellmates were sent to a secure location while the Azorius tried to stop the other inmates. Even though Vraska and the other prisoners were safe, they were still at odds with the guards who abused them. Vraska and the other cellmates knew they had to escape.

The group worked together to escape from the compound, but the Azorius were set on stopping Vraska because she was a threat. She was nearly killed by the guards but was saved when her spark ignited. After this she was sent to an unknown Plane and was left confused about what happened. It didn't take very long for her to master her new abilities.

Vraska spent two years traveling the Multiverse and exploring new Planes. Afterwards, she returned to her home Plane of Ravnica. Through her travels, she learned a valuable lesson. "A person should die the death they deserve." Her mission to bring justice to those who deserved it inspired many other Golgari to join in her goal. She became an assassin and murdered many Ravnicans who she thought deserved her wrath. She had a special priority for murdering members of the Azorius Senate, killing anyone and everyone involved with her imprisonment and her abuse.

Vraska was considered a myth among many of the Golgari. She remains hidden until someone peaks her interest(hence her name being the hidden) and no one but her knew why. She chooses targets with caution and avoids causing political issues. Her infamy became known to those not members of the Golgari and when she picks a target, he or she doesn't last long against her. After a job is done, she Planeswalks away to continue murdering people on other worlds.

While continuing her assassin job, Vraska sought the aid of another Planeswalker to complete a bigger task. Since Jace Beleren was the living Guildpact, he was the perfect candidate. To get his attention, she murdered people with names that are similar to planes he has visited and placed them to spell his name. Jace found Vraska and the two were at odds with each other. Vraska used many tactics to try to convince Jace to join her, including demeaning him on his failures on other Planes and revealing her end goal of destroying every guild. Jace then revealed that their conversation was being shown to the Guildleaders and Vraska's plans were foiled. She attempted to petrify Jace, but he survived. Vraska escaped and continued plotting in the shadows. Her sights were now set murdering the leader of the Golgari Jarad and becoming Guildleader. She formed an alliance with a race of insects known as the Kraul and a race of powerful zombies known as the Erstwhile to rally against Jarad

Vraska recieved an invitation from Nicol Bolas to meet him on his Meditation Plane. Bolas offered to help her become the Guildmaster of the Golgari Swarm in exchange for Vraska going to Ixalan to steal the Immortal Sun. She agreed and Bolas gave her the Thaumatic Compass to help Vraska find the city of Orazca where the Sun is located and the knowledge of how to sail.

Once she arrived on Ixalan, she portended to be a member of the Brazen Coalition and told other pirates she worked for a man named Lord Nicolas. She found her crew and sailed the ship known as the Belligerent. She was a democratic captain and easily gained the respect and admiration of her crew. While Vraska was continuing her search for Orazca, she found Jace stranded on a shore. Vraska attempted to question him on how he found her, but it was obvious to her that Jace lost his memory. Feeling pity for him, she let him live and allowed him to stay in her ship. Jace was still able to use his illusion magic and the crew of the Belligerent managed to plunder ships from the Legion of Dusk. As time passed, Jace and Vraska became friends and respected and loved each other. After Orazca resurfaced, Jace and Vraska fell into the deep water. This experience allowed Jace to reclaim his memories, much to Vraska's dismay. She was also able to the the memories Jace had regained. Vraska feared that she and Jace would become enemies again, but Jace forgave Vraska for their previous encounter. Now with an even stronger bond, the two climbed to the top of Orazca and were met by the sphinx Azor who used to be a Planeswalker and was the Parun of the Azorius Senate. The three discussed Azors actions and how he and Ugin attempted to imprison Nicol Bolas on Ixalan, but that plan failed. Since Jace was the living Guildpact, he used Azor's own magic to send him to an abandoned island.

Realizing that Bolas would both learn that Jace knew this information by reading her mind as well as kill her because the two are friends, Vraska suggests that Jace should erase Jace from her memory and eventually return her memories when the time was right. Jace agreed and Vraska's memories were removed. She summoned Tezzeret to Ixalan and he stole the Immortal Sun with the Planar Bridge. With the Sun gone Vraska Planeswalked from Ixalan.

When Vraska returned to Bolas, the dragon read her mind and found a fake memory Jace inserted. Pleased with her performance, Bolas told Vraska that Jarad was ready for her to execute and she would become the new Guildleader of the Golgari. While she was excited to finally become Guildleader, she left the Meditation Plane feeling something important was missing.

Guilds of Ravnica to War of the Spark

Once she returned to Ravnica, Vraska killed Jarad and became the leader of the Golgari Swarm. she was given aid from the Kraul and Erstwhile. The elves of the guild were unhappy with her leadership and wished Izoni would take the position instead. To appease Bolas, she petrified Isperia, the Azorius Guildleader and kept her body as a trophy. This allowed Dovin Baan to become the new Azorius Guildleader.

Vraska became trapped on Ixalan because of the Immortal Sun. She teamed up with Ral Zarek, Kaya, Lavinia, and Hekara to stop Bolas. But she betrayed the group and Hekara was killed by Lavinia who was possessed by Bolas. After being branded as a traitor, Ral Zarek attempted to kill her, but she fled to Ixalan. She eventually returned to Ravnica and had her memories restored by a Golgari telepath. Vraska immediately rejoined the battle and reunited with Jace. They promised each other they would be together if they survived and kissed once Bolas was defeated. 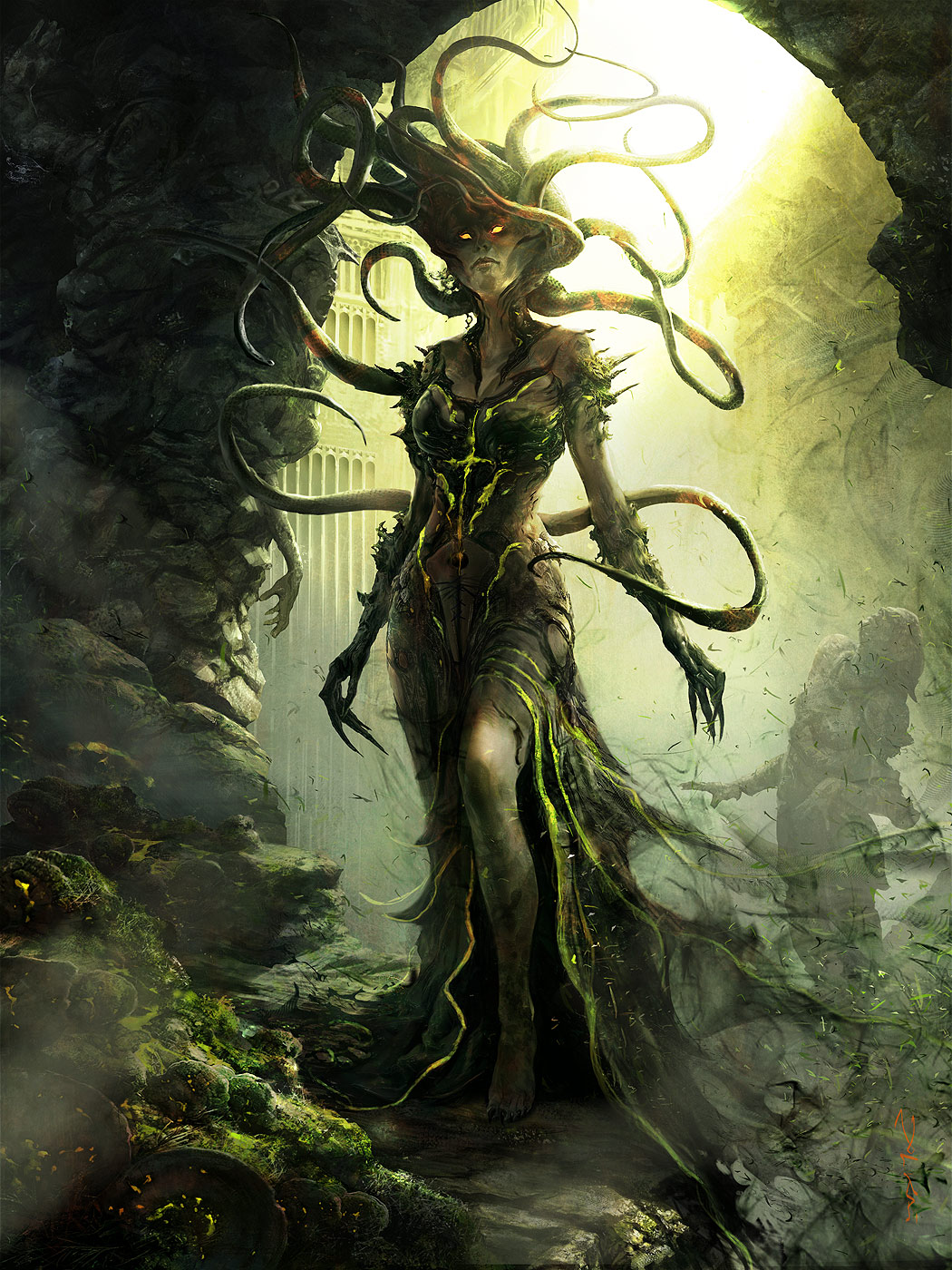 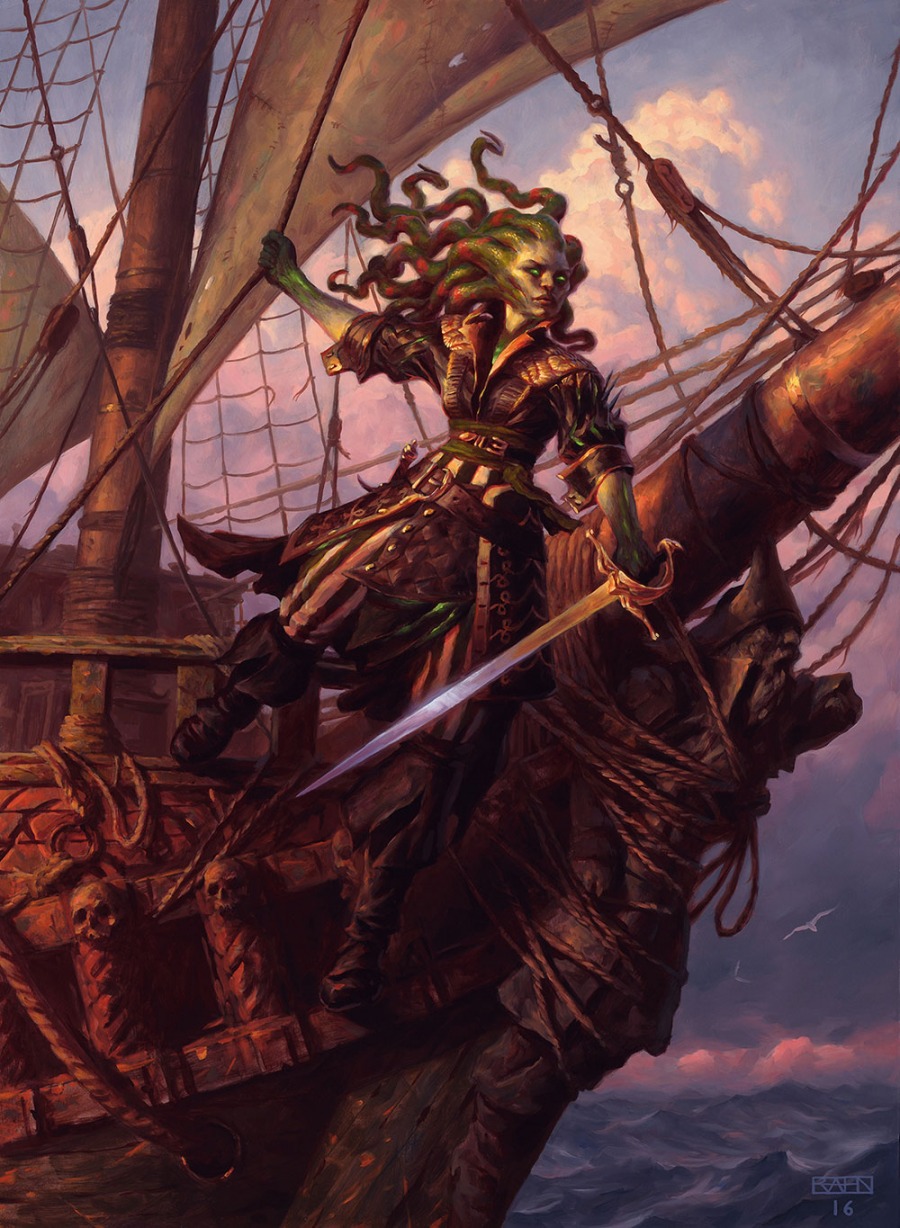 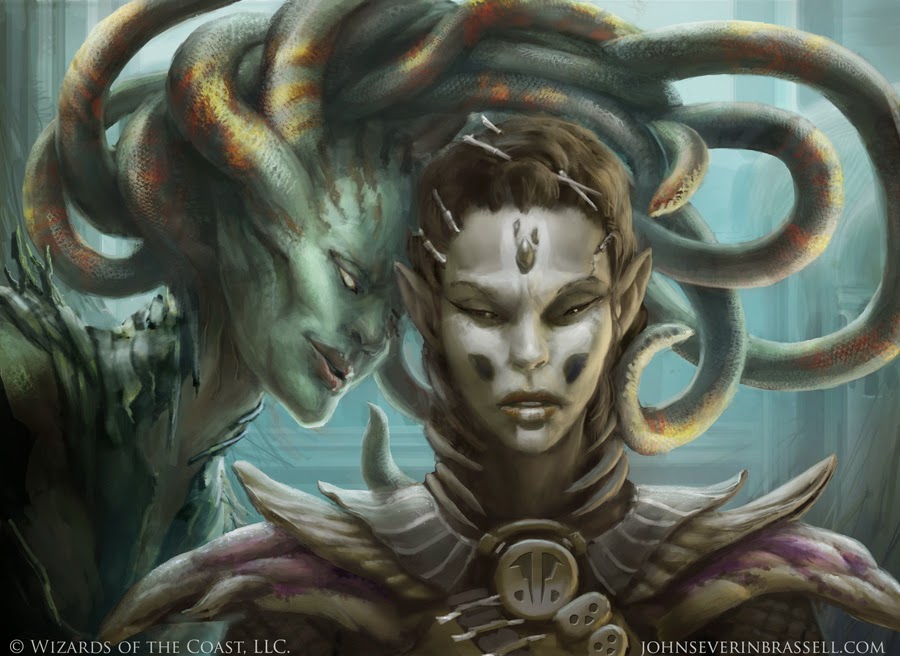 Vraska whispering to an elf 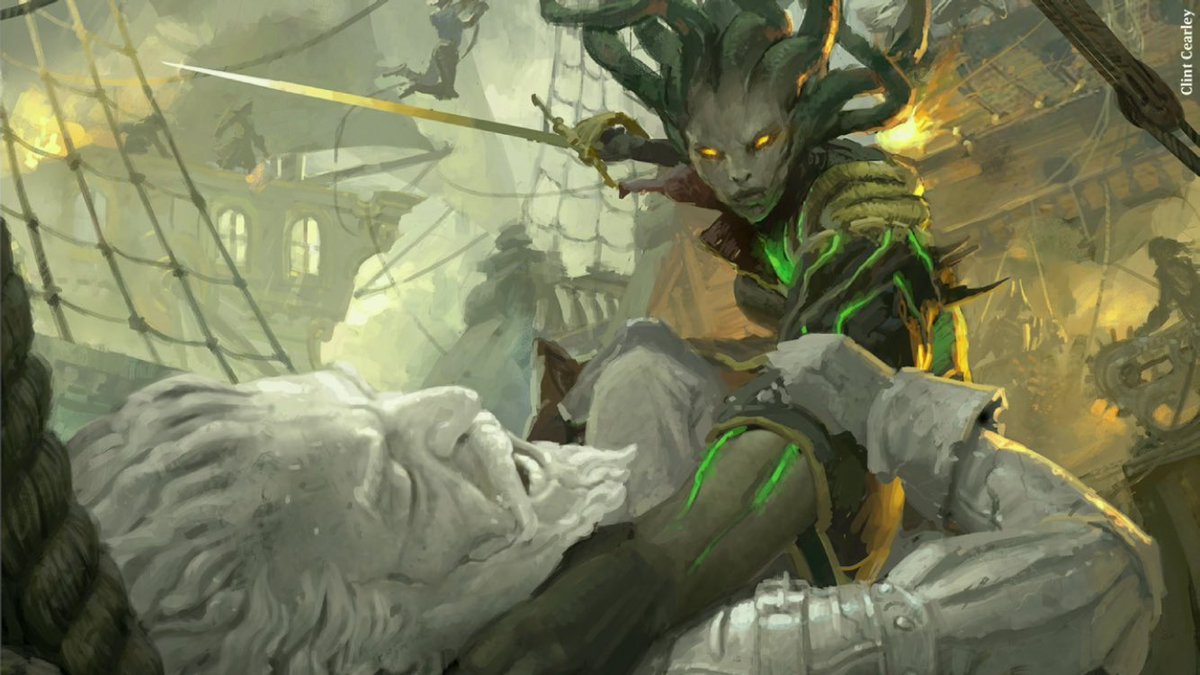 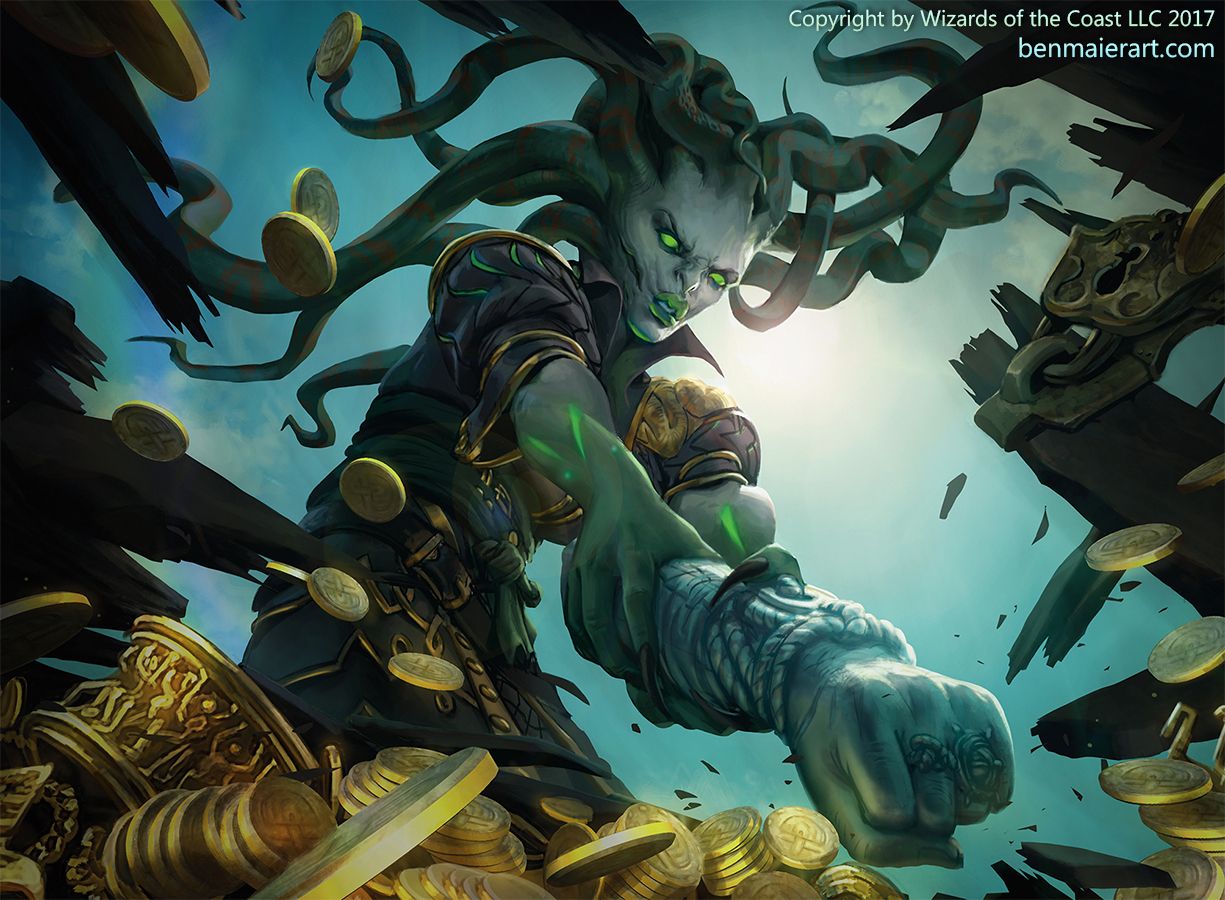 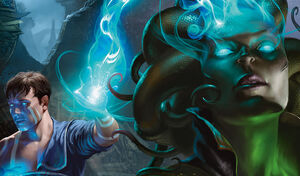 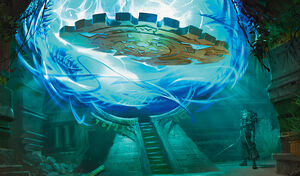 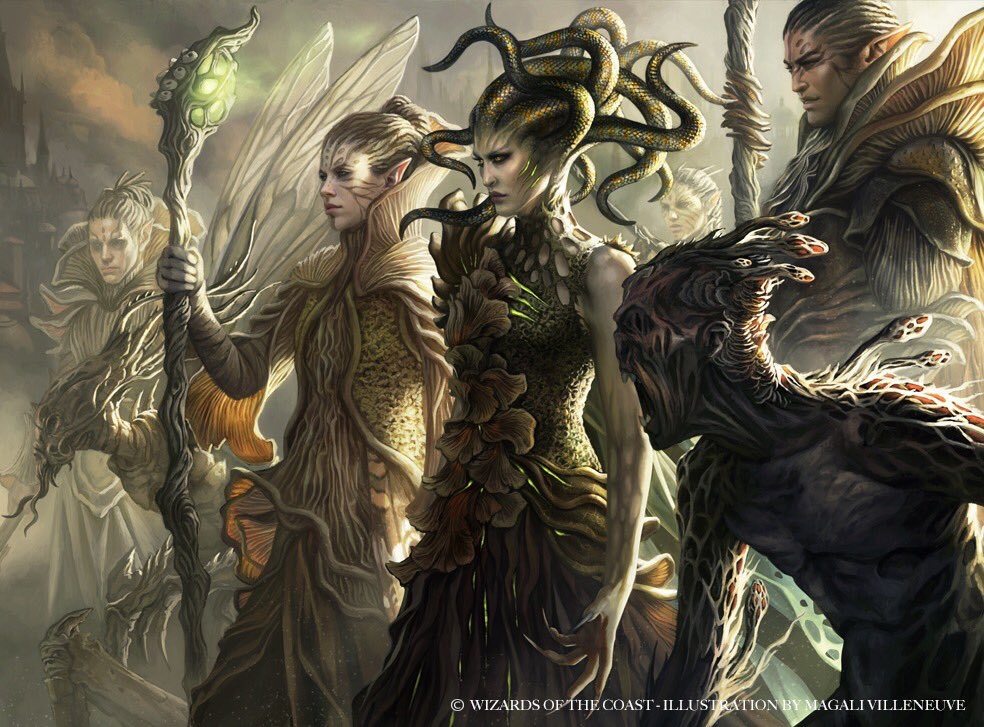 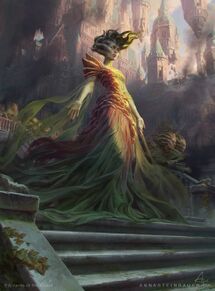 Vraska from War of the Spark 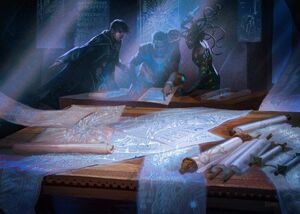 Vraska, Ral, and Jace going through the plans to revive Niv-Mizzet
Add a photo to this gallery
Retrieved from "https://villains.fandom.com/wiki/Vraska?oldid=3528130"
Community content is available under CC-BY-SA unless otherwise noted.