Soldier, Minor Villain
Vug is one of Frieza's henchmen in Dragon Ball Z. He takes orders from higher-ranking minions like Zarbon.

Vug is a purple reptilian and somewhat fishlike alien with a fin on his head.

Vug only appeared in the episode "Face-Off on Namek" (and its redub counterpart). He was one of the many henchmen who accompanied Frieza to Namek on his quest for the Dragon Balls. When Gohan and Krillin landed on Namek, Zarbon sent Vug and his partner Bund to investigate. Gohan and Krillin lowered their power levels to throw Bund and Vug off. Vug shot at the Namek spaceship they used to get to Namek, damaging it beyond repair. This enraged Gohan and Krillin, who powered up and attacked Bund and Vug. Gohan kicked Vug into Bund, sending him falling to watery grave.

Vug appears as a common enemy in the Dragon Ball video game spin-off Goku Gekitōden, where he is shown to be slightly weaker than his partner, Bund. In the game, his fighting style is shown to incorporate more energy wave techniques than physical combat. 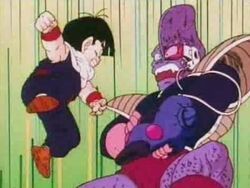 Gohan battles Vug, one of Frieza's henchmen.
Add a photo to this gallery

Retrieved from "https://villains.fandom.com/wiki/Vug?oldid=3180039"
Community content is available under CC-BY-SA unless otherwise noted.