In 1992, Vuk and her posse traveled to Earth, where they used their shape-shifting abilities to take on human disguises; even Vuk takes the form of a young tall and white-haired woman named Margaret Smith that she briefly killed along with her friends; she would later kill Margaret's husband by making his heart stop beating. She soon learns that the young mutant Jean Grey absorbed the Phoenix into herself after the X-Men's previous mission to save several astronauts and it also caused her to accidentally killed the mutant Mystique and several police officers. 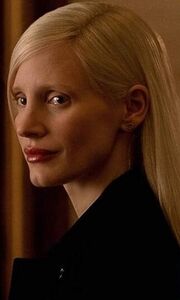 Retrieved from "https://villains.fandom.com/wiki/Vuk_(X-Men_Movies)?oldid=3376008"
Community content is available under CC-BY-SA unless otherwise noted.