Force Miloš into his snuff films.

Make Miloš kill him in order to conclude his masterpiece.
Kidnap Milošes wife and son.
Exploit Miloš for his personal interest (all succeeded).

Vukmir is the main antagonist of the controversial 2010 Serbian horror film A Serbian Film.

He was portrayed by Sergej Trifunović.

After a few days, Miloš signs the contract of Vukmir's and the action beings. The first porno they recorded was at a child-care building, where a women greeted Miloš and they went together in a room, while they saw a lonely underage girl known as Jeca, sitting on stairs. As the mother of the daughter saw the girl, she instantly tried to run away with her daughter. Vukmir's security jumped into action, taking the mother away, and the women took the daughter into a random room. The women comes back and brings Miloš into another room, where she gives Miloš head, with footage of underage Jeca licking ice cream appears on the screen, which made Miloš uncomfortable.

When Miloš came back home, he was trying to act normal in the house, explaining everything was fine to his wife. In the second porno, Jeca's mother is seen getting beaten up by a security guard heavily, while Miloš is staring at them. After the mother got abused, she went to Miloš on her knees, and started giving Miloš head as well, until she started biting on his member, and Miloš tried backing off, until the security guard hold Miloš in place, and she bit him, until Miloš started hitting Jeca's mother in the face. Miloš also finds out later on from his brother Marko that Vukmir was previously a psychologist and that he worked with kids.

Later in the movie, Miloš beats and rapes Jeca's mother before decapitating her to induce rigor mortis and, later, a catatonic Miloš is raped by Raša. He then watches footage of Lejla voicing concern for Miloš to Vukmir, then restrained as her teeth are pulled out and she is suffocated to death by a masked man as she is forced to fellate him.

As Miloš is guided onto one body, the masked man from Lejla's film enters and begins raping the other. Vukmir then reveals the masked man to be Marko, his victim to be Marija, and finally, that Miloš is raping Petar. An enraged Miloš lunges at Vukmir and smashes his head against the floor, initiating a brawl during which Marija bites off a piece of Marko's neck, then bludgeons him to death with a sculpture. Miloš wrestles a gun from a guard and shoots everyone except his family and Raša, whom he kills by ramming his erect penis into his empty eye socket. A dying Vukmir praises Miloš' actions as truly worthy of film.

Miloš, having recalled his actions, including locking his wife and son in their basement before passing out earlier, returns home to find them. He and his wife agree that they and their son should die together, so the three gather in bed and embrace before Miloš fires a fatal shot through himself, Petar, and Marija.

Vukmir is a man in his thirties with dark-brown, sinister eyes. He usually wears a dark-green vest and black trousers, which fit along his worrisome persona.

Vukmir is an absolutely inhuman individual, and the ultimate personification of perversion, sadism and cruelty. He particularly enjoys destroying the innocence of others, thus, he has no qualms torturing and raping babies, children, women and to force his actors into even more perverted stuff. Unlike most mobsters who do their dirty jobs for greedy purposes, Vukmir consider snuff filming as an art; as such, he has absolutely no remorse for what he have done and even considers Miloš as his greatest actor. 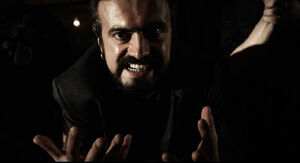