Vulcan (real name Gabriel Summers) is a major villain from the X-Men, Guardians of the Galaxy and Inhumans franchises and is the legendary missing Summers' sibling (related to Cyclops and Havoc) - unlike his brothers he was raised away from Earth by the Shi'ar Empire and became infinitely more powerful than either of them, by the time he confronted the X-Men he had evolved into what Marvel terms an Omega-level mutant (which basically means Vulcan is capable of near-infinite power should he so desire and could even surpass physical form). He is the archenemy of Gladiator due to his takeover of the Shi'ar Throne

He was created by Ed Brubaker and Trevor Hairsine.

Vulcan's history began on the Shi'ar homeworld, as the unborn child of Christopher and Katherine Summers (parents of Cyclops and Havok). Katherine Summers was pregnant when the Summers were abducted by D'Ken. Corsair escaped in an attempt to save both mother and child, but she was killed in retaliation by D'Ken.

Gabriel was removed from his mother's body and placed in an incubation-accelerator, used to breed new slaves, aging him to the prime adolescence. Sent to Earth to become a slave for Davan Shakari, the Emperor's hand on Earth, he escaped to be found by Moira MacTaggart with little or no memories of who he was or where he came from. She took him as her ward, and instructed him in the use of his nascent powers.

He claimed his name was Gabriel, but he chose the code name of Vulcan from a book on Roman mythology, and Charles Xavier recognized his mental imprint as being related to Cyclops. He was one of the team, including Petra, Darwin, and Sway that attempted to rescue the original X-Men from Krakoa.

Vulcan and his team rescued Scott from Krakoa and Vulcan was able to hurt the living island, which greatly enraged the creature. Vulcan revealed to Cyclops that they were in fact brothers, and sent Cyclops away on their jet to safety. As the jet took off, Cyclops watched in horror as the living island struck down and, seemingly, killed Vulcan and his team. Sway was hit first, and severed in two at her torso. Her body released the last of her mutant power to slow time down around them. As Petra was incinerated, she also reacted reflexively and drew them all below the surface into a cave that her power created. There, Vulcan and Darwin lay dying, and Darwin transformed himself into energy and bonded with Vulcan, thus saving them both.

After the apparent deaths of the team, Cyclops returned to Professor Xavier in a hysterical state, blaming himself for their deaths, and the Professor decided it was best for all involved if he altered their memories to forget about Vulcan and his team, and spare everyone the agony. A new team was assembled to rescue the original X-Men from Krakoa.

Vulcan and Darwin were launched into space along with the Krakoa land mass by Jean Grey and remained inert until years later, when the massive backlash of power resulting from M-Day awakened Vulcan.

He returned from his space exile to reclaim his title as an X-Man, killing Banshee in the process, and attempting to kill Wolverine, even kidnapping Marvel Girl and Cyclops. After Xavier's deception had been exposed, Marvel Girl reached into Vulcan's mind and released the subconscious inert form of Darwin, which Vulcan expelled from his body. Using this opportunity, the X-Men attacked him as they deemed him too dangerous to be left alone. Vulcan easily repelled their attack and fled the planet, renouncing Cyclops as his brother, and headed for space with the vision of D'Ken killing his mother raging in his mind, and bent on revenge.

The Rise and Fall of the Shi'ar Empire

On his way to the Shi'ar galaxy he learned that D'Ken had been in a coma and was no longer the ruler of the Shi'ar. He re-focused his anger on the then current ruler: Lilandra. He captured a Shi'ar war-bird and its crew and learned of Lilandra's sister Deathbird, who was in exile. As he made his way towards the Shi'ar galaxy, he destroyed the star-gates behind him to hinder the X-Men he knew would be coming, which brought him to the attention of the Shi'ar Imperial Guard. Impulse was killed and several other members were seriously injured during the battle. Gabriel was ultimately defeated by Gladiator, losing his left eye as a result. Under K'Tor's orders he was taken to the prison orbiting Phygim.

After spending an unknown amount of time in the prison, Gabriel was released by a "Secret Order" of Shi'ar. They seemed to want Vulcan's help in 'restoring the true empire', and took him to meet the also imprisoned Deathbird. However, soon afterwards, Deathbird managed to convince him to at least delay his plan for vengeance, after the two became romantically involved. Vulcan used his powers to heal D'Ken's injuries. Afterwards, a grateful D'Ken asked Vulcan to marry Deathbird.

After his wedding Vulcan threw Professor Xavier into the M'Kraan Crystal (which restored his powers), killed D'Ken and named himself emperor of the Shi'ar. In the midst of a battle between the Shi'ar troops loyal to Lilandra (with Corsair's Starjammers and X-Men) and Shi'ar troops loyal to D'Ken, Corsair was killed by Vulcan when Corsair commanded Vulcan, as his father, to stop the senseless violence.

The civil war between Vulcan's forces and those loyal to the dethroned Lilandra raged on. Led by Havok and the Starjammers, Lilandra's forces gradually whittled away at Vulcan's forces, which were plagued by defections. The Shi'ar, contrary to Vulcan's expectations, were not happy to have an outsider as their ruler. Vulcan was discouraged by this, but Deathbird convinced him that they would come to accept him. Warned in advance of a rebel raid on Feather's Edge, Vulcan and his fleet ambushed the Starjammers. However, in the middle of the battle, his ship, the Hammer, was destroyed by the Scy'ar Tal (translating as "Death to the Shi'ar").

Vulcan and Gladiator attacked the leader of the Scy'ar Tal and were easily defeated, whereupon they retreated deeper into Shi'ar space. Marvel Girl made contact with the Eldest Scy'ar Tal and discovered their true origin. The Scy'ar Tal were originally called the M'Kraan. Early in their history, the Shi'ar attacked them, killed a great number of their people, making the rest flee for their lives. Eventually, the Shi'ar settled on their planet, took the M'Kraan Crystal as their own, and passed down the legend of the M'Kraan Crystal as a sacred gift from their deities, Sharra & K'ythri. The M'Kraan then changed their named to Scy'ar Tal and devoted their culture and society to the destruction of the Shi'ar Empire. With their first attack, they destroyed Feather's Edge by transporting a star to obliterate it. After which, Vulcan made contact with the Starjammers to call a temporary ceasefire.

Under the ceasefire, the Shi'ar and the Starjammers decided to take out the Finality, thus crippling the Scy'ar's biggest threat. Once Havok and Vulcan were in position to destroy Finality, the Eldest Scy'ar tries to stop them. Once Vulcan figured out how the Eldest was powered, he severed the connection Eldest had with his brothers, making him powerless. Once the connection was severed, the Scy'ar became unorganized, and the tide of the battle shifted to the Shi'ar. The Shi'ar then proceeded to attack both the Scy'ar and the Starjammers. Meanwhile, Vulcan blasted Havok into a sun.Vulcan decided to use Finality to destroy the Scy'ar by using the weapon to place a star in the middle of their fleet.

Alex returned and, having absorbed enough power to burn him, decided to end things with Vulcan. While they battled, Rachel and Korvus tried but fail to stop the beacon that would initiate the attack by the Shi'ar. The Shi'ar Imperial Guard ended Alex's battle with Vulcan by appearing with the Starjammers in captivity, threatening to kill them. Before surrendering, Alex destroyed Finality. With Alex and the Starjammers in custody Vulcan declared that he would return the Shi'ar Empire to its former glory.

Vulcan began an aggressive war of conquest to expand the Shi'ar Empire, occupying, among other races, the Z'Nox. All the while, he became obsessed with making Havok acknowledge his superiority, which Havok refused to do. The Starjammers escaped their prison, nearly killing Vulcan in the process, and severely wounding Deathbird, but were forced to flee to the Kree Imperium. Vulcan launched a surprise attack on the Kree, now ruled by Black Bolt and the Inhumans. The Imperial Guard retrieved Lilandra, who Vulcan planned to execute.

However, he was stopped by one of his admirals, stating that by doing so would only make her a martyr and incite factions loyal to her to overthrow him around a similar figurehead. Gabriel then abducted and attacked Adam Warlock. Soon enough, Lilandra was assassinated in an attempt to usurp Vulcan.

Immediately, a civil war ignited in the Imperium between factions loyal to her and Vulcan. Though advised by the Fraternity of Raptors and his admirals to sue for peace and return to their planets to restore order, Vulcan refused to listen and flew off to engage the Inhumans. He found Black Bolt, with his T-Bomb. Believing the Inhuman intended to destroy his empire, Vulcan engaged the silent king. They both died in the resulting explosion that tore a hole in the fabric of space and time. Gladiator then took Vulcan's place as Majestor of the Shi'ar in order to prevent another civil war. 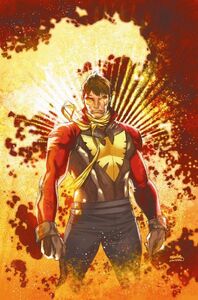 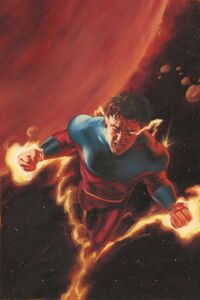 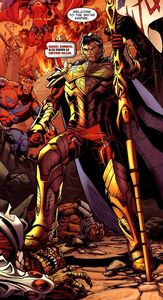 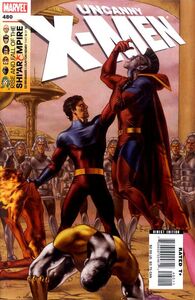 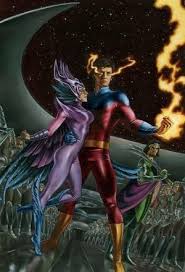 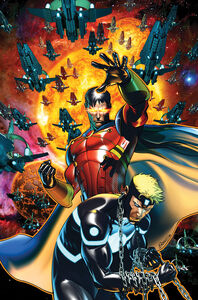 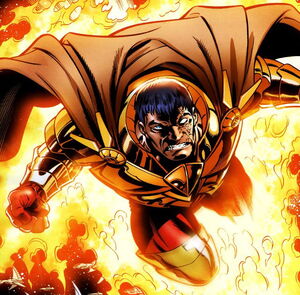 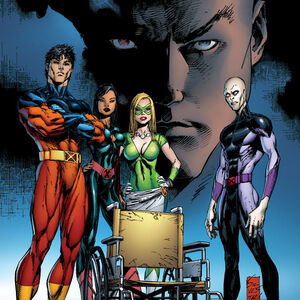 Vulcan with his X-Men team. 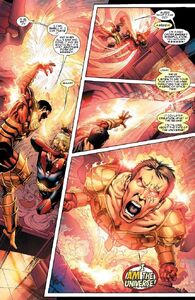 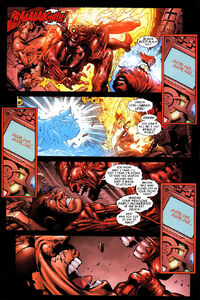