Being sadistic towards perceived opponents.

Depends on his assignment.

Vulpes Inculta is a supporting antagonist in Fallout: New Vegas, a high-ranking member of Caesar's Legion and the leader of the Frumentarii caste, who perform special undercover assignments for Caesar.

He was voiced by Jason Spisak.

Vulpes is an insidious, sinister and utterly ruthless man who commits unspeakable atrocities without remorse, but is uncharacteristically calm and composed for someone in his occupation. He acts politely towards people even when his crimes are made clear. Otherwise, he is almost purely emotionless.

Vulpes is first seen in the fictionalized Nipton, located on the California-Nevada state border, which has just moments ago been razed by Inculta and his crew, who have crucified the residents. He says that he made the people hold a "lottery" to determine who would be spared, and that they deserved it because they did nothing to protect each other and acted selfishly during the lottery, only caring about themselves being spared. He then gives the Courier an optional quest to inform the NCR at Mojave Outpost of what happened there. Because Nipton is meant to be visited very early in the game, the player will usually be too low a level to kill Vulpes and his men during the first encounter.

Vulpes next appears on the New Vegas Strip after the Courier confronts Benny at The Tops, disguised as a regular civilian, where he invites you to meet Caesar himself at the Legion's home base on Fortification Hill, who wants to enlist the Courier to the Legion's side. When you go to the Fort, he is standing next to Caesar in his throne room, and offers another quest, where it is revealed that Inculta is secretly working with the Omerta crime family of the New Vegas Strip to kill all the residents of the Strip with gas bombs once the final battle at Hoover Dam starts.

If Vulpes Inculta is killed during any encounter, it will heavily decrease the player's relation with the Legion, and Caesar will recruit assassins to kill the Courier. If he is killed before he is encountered at Nipton, he is replaced by another Frumentarii named Gabban; if killed before being encountered on The Strip, an agent named Alerio will take his place.

Vulpes' initial meeting with the Courier 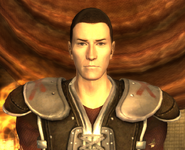 Vulpes without his Vexillarius helmet