The Adventures of the American Rabbit

Leader of the Jackal Gang

Blow up all of the citizens in San Francisco, and destroy the American Rabbit (failed).

Vultor is the main antagonist of the 1986 animated film The Adventures of the American Rabbit. He is an evil buzzard and the Jackal gang's boss. He first appears posing as the pet of a figure named Walt, a heavyset man with no visible face who wears a pinstripe suit, a fedora, and sunglasses that flash when he speaks.

He was voiced by the late Kenneth Mars, who also played his owner Walt in the same film.

When Vultor and the Jackals arrived in New York City, they captured the Chocolate Moose and his son and rented the Statue of Liberty for a day. Walt and Vultor rigged the statue with dynamite and threatened to blow up the visiting public, but the American Rabbit clobbered Walt, leaving only a pile of clothes and Vultor behind.

Vultor manipulated the American Rabbit to announce to the public that he and the Jackals were in total control of the city, but it wasn't long before the townspeople turned on them, and Rob's friends freed the Chocolate Moose and his son. Vultor cursed the Jackals, dismissing them as traitors and swearing to destroy the American Rabbit (and New York City) once and for all with his doomsday switch. Luckily, Rob cut the power to the city by stopping its hydroelectric turbines, deactivating the doomsday switch and foiling Vultor's evil plot. 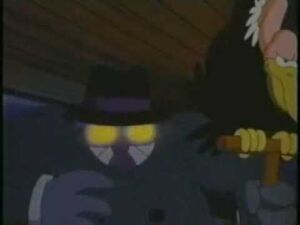 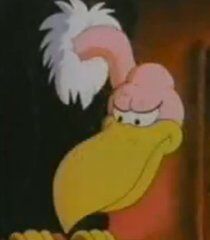 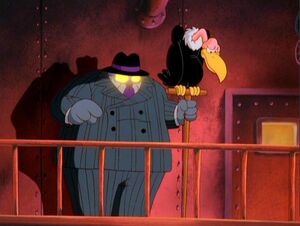 Vultor and his owner Walt.
Add a photo to this gallery
Retrieved from "https://villains.fandom.com/wiki/Vultor?oldid=3707204"
Community content is available under CC-BY-SA unless otherwise noted.