The Vulture is one of the main villains in the alternate reality story "Spider-Man Noir".

Unlike the mainstream version of the Vulture, who is a fairly standard supervillain, the Noir version is a much darker and more evil individual on the account of being a cannibal and is also by far Spider-Man's most hated foe in this continuity due to him cannibalizing Uncle Ben.

In Shattered Dimensions, when having possession of the Tablet of Order and Chaos, he expressed a fearful side, especially when mentioning Norman Osborn (which is ironic considering both his appearance and reputation); while at the same time, has secretly revealed the desire for total freedom.

The Vulture was apparently a former Circus Freak who entertained people by biting off the heads of live chickens. Eventually escaping captivity, he came to become the right-hand man of notorious gang boss Norman Osborn, who clearly appreciated the Vulture's viciousness and his usefulness as an enforcer. Often the Vulture's reputation was all that was necessary to get people to roll over for Osborn. But one man, Ben Parker, refused to be intimidated, and paid dearly for his defiance.  Going after Ben Parker, the Vulture savagely murdered and cannibalized him. Everyone knew it was Toomes but few had the courage to admit this.

Following Peter Parker's becoming Spider-Man, he made taking vengeance on the Vulture one of his main priorities. He eventually got his chance when the Vulture attempted to kill and eat his aunt May Parker. Not wanting his aunt to suffer the same fate as Uncle Ben and also desiring vengeance, Spider-Man shot the Vulture dead.

Vulture later appears in the video game Spider-Man Shattered Dimensions with no explanation given as to his apparent revival. Regardless, Vulture comes into possession of one of the fragments of the Tablet of Order and Chaos, which granted him teleportation and enhanced physical capability. This, coupled with his feral nature allowed him to fight Spider-Man on more equal ground, but in the end Spider-Man triumphed over the madman, but seemingly chose not to kill him again. Vulture's fate after this is unknown. 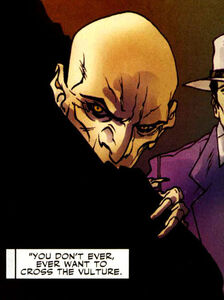 Noir Vulture as he appears in the comic
Add a photo to this gallery
Retrieved from "https://villains.fandom.com/wiki/Vulture_(Marvel_Noir)?oldid=3584452"
Community content is available under CC-BY-SA unless otherwise noted.