Feeding his pets.
Seeking justice for the murder of his parents.

Get justice for his parents' death by either capturing or killing Klaue.

Aid Killmonger in his plot of selling the vibranium throughout the world (all failed).

W'Kabi is a major antagonist in the 2018 Marvel Cinematic Universe film Black Panther and will return in some capacity in its 2022 sequel Black Panther: Wakanda Forever.

He was portrayed by Daniel Kaluuya, who also played Michael Fry in Psychoville and Black Death in Kick Ass 2.

Being Friends with T'Challa

W'Kabi started out as a best friend to T'Challa, and the lover to the Dora Milaje general Okoye. However, W'Kabi lost his parents when Ulysses Klaue infiltrated Wakanda and stole vibranium (thanks to N'Jobu's treason).

Many years later, after T'Challa had been crowed king of Wakanda, he was informed that Klaue was planning on selling a piece of vibranium he had stolen from a British museum. As such, T'Challa planned to go after Klaue, which was encouraged by W'Kabi, who told his friend to either apprehend Klaue or kill him.

T'Challa then vowed to W'Kabi that he would track down Klaue and make him answer for his crimes against Wakanda.

Though T'Challa was able to help capture Klaue, Killmonger successfully freed Klaue from custody, only to later kill him in order to gain access to Wakanda. Feeling disgraced over T'Challa's failure, W'Kabi selfishly lost his faith in his own friend when T'Challa was only new to the throne. Eventually, Killmonger arrived at the Wakandan border bringing Klaue's body, which motivated an impressed W'Kabi to ally himself with Killmonger.

W'Kabi then reveals his new allegiance to T'Challa by revealing Killmonger's true heritage to the Council as Erik challenges the latter to a duel. After T'Challa lost, W'Kabi watches in satisfaction as Killmonger throws T'Challa into a waterfall to his death. W'Kabi then proceeded to aid Killmonger's next plan in providing vibranium weapons to the Wakandan spies around the world so Wakanda could begin taking power.

However, T'Challa is rescued by the Jabari tribe (led by M'Baku), thanks to a debt that T'Challa paid for sparing his life. After being revived by Nakia, Shuri and Ramonda, T'Challa returns to stop Killmonger, who sends W'Kabi and his men to engage in battle against the Dora Milaje. During the battle, T'Challa begs his former friend to call his men off, but W'Kabi foolishly refuses and calls several rhinos to his aid, turning the tides of the battle.

As his tribe corners the remaining resistance, W'Kabi watches in shock as M'Baku brings in the Jabari tribe to help, again shifting the battle. W'Kabi attempts to ram into M'Baku using his rhino, although Okoye gets in the way, causing the rhino to stop and affectionately lick her. Okoye then orders W'Kabi to lay down his weapon, saying that she would rather kill her former love than risk the sake of Wakanda's protection. Upon looking over the bloodshed of the battle and realized what he has done, W'Kabi complies and his forces stand down as well and is arrested for his reckless betrayal and actions to both T'Challa and all of Wakanda. 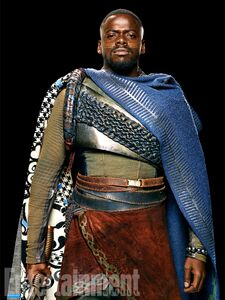 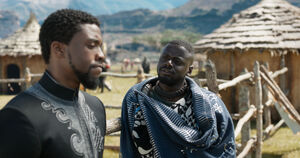 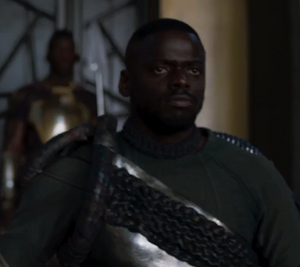 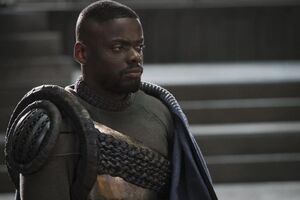