Villains Wiki
Register
Don't have an account?
Sign In
Advertisement
in: Article stubs, Villains of Folklore, Mythology Villains,
and 14 more

Capture souls to send to Hell

Wanyūdō, also known as Wanyūdō (Japanese: 輪入道, literally "wheel (輪) monk (入道)"), also known as "Firewheel" or "Soultaker", is a figure in Japanese mythology, a well-known yōkai in the folklore of Japan; earliest reports of Wanyūdō sightings date back to the Heian period.

They are demonic entities from Japanese folklore and mythology, envisioned as a disembodied head within a burning ox-cart wheel it is a class of yokai that is deeply feared due to its intense sadism and ability to trap souls within it and send them to Hell.

A Wanyūdō is an evil person in life (sometimes a vicious warlord, or a malevolent ruler) and was thus condemned to spend their afterlife as a demonic creature of suffering, doomed to forever roll between the realms of mortals and Hell, tormenting the living and inflicting great misfortune and torture to all they came across, while also dragging souls to Hell via capturing them within its fiery wheel.

Wa Nyudos is so wicked that even a simple glance of the creature as it thunders through a village or lonely road can bring disaster to entire families. A particularly gruesome example of just how evil a Wa Nyudo can be was told in a tale about a mother who gazed upon a Wa Nyudo as it passed her window, the demon snarled at the woman "Instead of looking at me, look instead at your child!". The woman then looked down to see her infant now crying in pain as its legs had been removed, looking back she saw the Wanyūdō chewing on the legs as the infant lay in its own pool of blood. 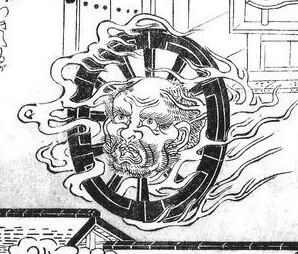 A black and white artistical depiction of a Wanyūdō. 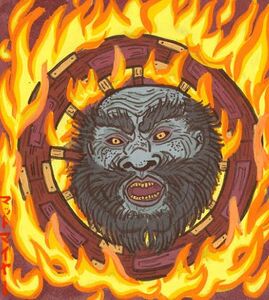 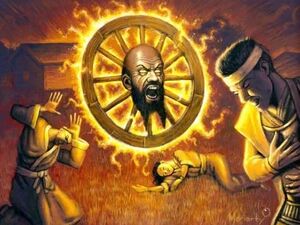