Skilled use of weapons

Waddle Dees (in Japanese: ワドルディ, Wadorudi) are supporting antagonists of the Kirby franchise. They are inhabitants of Dream Land who primarily serve the land's self-proclaimed ruler King Dedede and willingly assist him and occasionally other villains in their various schemes. Despite this, many Waddle Dees are shown as not actively evil and mostly carefree, not outright trying to impede Kirby unless they are ordered to do so. They often serve as the secondary antagonists of most games in the series where King Dedede is the main antagonist.

Waddle Dees are one of the most common enemies Kirby encounters, appearing in every game in the franchise since the first title, Kirby's Dream Land. They do not give any Copy Abilities when inhaled. They mostly act docile and only damage Kirby by colliding with him. Others, however, can pilot machines or wield weapons such as a spear or bow to either attack Kirby or cause a hazard in the stage. Certain Waddle Dees can be found wielding parasols, granting the Parasol Ability if swallowed.

The Waddle Dees frequently appear as background characters, sometimes showing up as an organized army with spears at the ready when trying to attack whoever or whatever is attempting to attack their master, King Dedede. As expected, however, they are easily defeated and knocked aside. Several episodes focus on them and their relation to Dedede.

"Hunger Struck" has Escargoon discover the Waddle Dees are costing too much money with the massive amounts of luxurious food they consume. Furious, King Dedede demands a cheaper way to feed the Waddle Dees so that he can eat more and save the money to pay Nightmare Enterprises for their monsters. The Cappy Town citizens have a contest of who can produce the cheapest food, with Chef Kawasaki winning the contest with a paper-thin sandwich for only one D-Buck. Their leader, Waddle Doo, attempts to reason with King Dedede when he notices the negative effect the almost nonexistant food is having on his troops. Of course, King Dedede doesn't listen and the Waddle Dees soon go berserk, holding nearly the entire castle hostage until they are treated better. King Dedede quickly orders a chef monster from NME. The monster and Kirby have a cook-off, which ends up bloating some of the Dees to a ridiculous size. Kirby then pleases the Dees with more healthy food before defeating Fryclops the chef monster, ending the episode on King Dedede praising Kirby's cooking.

In "Waddle While You Work", King Dedede once again needs money to pay his debts to NME and decides to sell off the Waddle Dees to Cappy Town. This works extremely well, making King Dedede a lot of money but resulting in the entire castle soon being empty. The Waddle Dees are treated much better by the Cappy Town people, even being better at some of their jobs as shown with Dr. Yabui and Chief Bookem. Eventually, a miserable, starved King Dedede goes to search for food on his own and comes across Dyna Blade's baby, trying to eat the chick. This angers Dyna Blade and the Dees assist with saving King Dedede from the bird's wrath.

In "Pink-Collar Blues", the Waddle Dees' incompetence and high cost gets to King Dedede and he replaces all of them with a singular robot ordered from NME, the Domestic Servant Robot. They migrate to a cave near Cappy Town and nearly attack various citizens when they sneak in to see what they're up to. When their leader Waddle Doo sees smoke coming from Castle Dedede, he and the Waddle Dees rush over to assist Stone Kirby with taking down the transformed Domestic Servant Robot.

In addition to their trophy returning in Super Smash Bros. Brawl, the Waddle Dees also appear as part of King Dedede's moveset, carrying King Dedede in before being knocked away in his intro animation, one posing alongside him in one of King Dedede's victory animations, being tossed forward in his side special, and used in his Final Smash, Waddle Dee Army. Beyond that, the Waddle Dees also have two collectable stickers (One based off the heroic Waddle Dee in Kirby 64: The Crystal Shards, and the other based off their ball form in Kirby: Canvas Curse, and they appear in the Subspace Emissary mode as King Dedede's main henchmen and unused enemies.

In Super Smash Bros. Ultimate, the Waddle Dees return in King Dedede's animation and alternate costume, while also gaining a spirit. The Waddle Dee spirit is a neutral-type advanced-level spirit that spirit battle has the player fight a team of four Kirbys on the Dream Land GB stage, with no gimmicks present. When evolved, the Waddle Dee spirit becomes a spirit for Bandana Waddle Dee, who both gains a level and gains the ability to strengthen any items that cause battering damage.

Like many residents of Dreamland, Waddle Dees bear a very simplistic appearance. They possess a light brown and spherical body with pear-shaped, tan faces, short, stubby arms, and tan/light-orange feet. Although many variations of Waddle Dees exist, not many change up this basic design. The only major exception to this is the Waddle Doos, who are typically darker in color, and have a large cyclopean eye in place of the Waddle Dee's face, as well as two hairs above, said eye.

As stated before, Waddle Dees are primarily carefree and friendly creatures. They are not actively malicious or dangerous towards anyone around them, sometimes only serving as enemies to Kirby because he got in the way of what they were doing, and, a trait shared by many residents of Dreamland, they can be fairly lazy. Volume #39 of the Nintendo Power magazine describes the Waddle Dees and Waddle Doos as being not very intelligent, stating that this is their greatest downfall. For reasons unknown, they, or at least a good number of them, are willingly subservient to King Dedede and usually follow his orders without question, seemingly not realizing when their King had been possessed by Dark Matter in Kirby's Dreamland 2 because of their fierce loyalty. Even so, not all Waddle Dees are strictly Dedede's minions, and are equally likely to suffer from his plans as they are to benefit, as a crowd of Waddle Dees can be seen cheering for Kirby after he retakes all the food Dedede had stolen in Kirby Super Star and Kirby Super Star Ultra.

In Kirby: Right Back at Ya!, it is stated that the Waddle Dees will dedicate themselves to serving and repaying anyone who treats them kindly, explaining their loyalty to King Dedede, even when he is completely abusive towards them. However, despite this, it is shown that even they can be pushed too far by the King's cruelty, violently rebelling against and trying to eat Dedede and the other inhabitants of his castle when they were starved so that Dedede could save money. 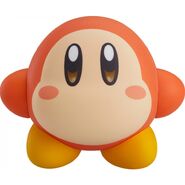