Dispose of any evidence against him.

Wadsworth is the main antagonist of the 1985 cult-classic film Clue (according to the movie's third ending). His real name is Mr. Boddy, an expert extortionist who runs a network of spies and informants.

He was portrayed by Tim Curry, who also played Frank-N-Furter in The Rocky Horror Picture Show, Belial in The Legend of Atlantis, Drake in The Pebble and the Penguin, Big Bayou in Courage the Cowardly Dog, Cardinal Richelieu in The Three Musketeers, Thaddeus E. Klang in TaleSpin, Ben Ravencroft in Scooby-Doo and the Witch's Ghost, Pennywise in IT, Mouse King in Barbie in the Nutcracker, Taurus Bulba in Darkwing Duck, King Chicken in Duckman, Hexxus in Ferngully: The Last Rainforest, The Goblin King in Scooby-Doo and the Goblin King, Maestro Forte in Beauty and the Beast: The Enchanted Christmas, General Von Talon in Valiant, El Malefico in Mucha Lucha: The Return of El Malefico, Kilokahn in Super Human Samurai Syber-Squad, Farley Claymore in The Shadow, Lord of Darkness in Legend, Anatoly Cherdenko in Command & Conquer: Red Alert 3, Dr. Slicer in Recess, Philippe in Barbie and The Three Musketeers, and Big Brother in Johnny Bravo.

Mr. Boddy runs a network of spies, who help him gather private information about the private lives of several people connected to the United States government. He then blackmails the person for large sums of money.

Mr. Boddy cleverly comes up with a plan to disguise himself as a butler named Wadsworth. He then invites six of his victims (Ms. Scarlet, Col. Mustard, Mrs. White, Prof. Plum, Mrs. Peacock and Mr. Green) to his mansion for a dinner party. He also employs his spies to aid him in his scheme, posing as a cook, a maid, a cop, a motorist, and a singing telegram girl. He also forces HIS butler (likely the REAL Wadsworth) to pose as Mr. Boddy and mislead his victims. He even fabricates a story about his wife committing suicide as a result of Mr. Boddy's blackmail.

The party turns sour when the guests are given weapons, and someone tries and kills the fake Mr. Boddy. This leads to a night of murder, as each one of the undercover spies are killed off one by one. The group works together to try and solve the mystery, with Wadsworth appointing himself as leader of the group. After six murders, Wadsworth claims he knows who the killer is, but first explains HOW it was done.

Little by little more truth is revealed. The guests find out that everyone who died was a spy for Mr. Boddy, and who they spied on. At the very end of the movie, it's revealed that all but one of the guests (Mr. Green) is a murderer, each one killing the informant who gave Mr. Boddy information on them personally, while Prof. Plum killed Mr. Boddy. When the guests can't figure who killed the final victim, Wadsworth reveals that he did, revealing his true identities and thanking his victims for killing all his spies so there is no evidence against him.

However, right as Mr. Boddy reveals he will continue to blackmail them, Mr. Green pulls a revolver out of his pocket and kills him. He reveals he is actually an FBI agent and the others guests are subsequently arrested.

Although the above plot is considered "What REALLY happened". the movie has two alternate endings. Both reveal Wadsworth to be an undercover FBI agent, with the killers in each being Ms. Scarlet and Mrs. Peacock respectively.

A fourth ending was filmed but never used, in which Wadsworth killed all of the victims due to his obsession with perfection; having failed to be the perfect husband and the perfect butler, he decided to become the perfect murderer. Upon this revelation, he further reveals that he had the guests drink poisoned champagne to leave no witnesses, before the police break in and arrest him. However, he manages to break free and escape in a police car, only to be attacked by three police dogs in the back seat. 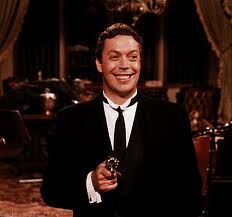 Wadsworth's evil grin when he reveals his true identity. 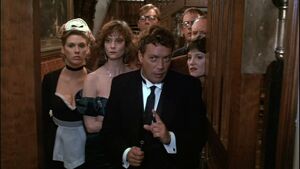 Wadsworth as the self-appointed leader of the group.
Add a photo to this gallery
Retrieved from "https://villains.fandom.com/wiki/Wadsworth?oldid=4033473"
Community content is available under CC-BY-SA unless otherwise noted.