The Man in the White Pajamas
Bruce

Kill Uncle Benny in order to take over his triad (succeeded).

Wah Sing Ku (古華勝) is the main antagonist in the 1998 film Lethal Weapon 4, the fourth installment of the Lethal Weapon film series.

Wah Sing Ku is a high-ranking Chinese Triad negotiator trying to get the 4 Fathers (one of whom is his older half-brother Michael Sing Ku) bought into America and get them out of prison. He is first seen at Uncle Benny's restaurant listening to Uncle Benny talk to a States Department Man about bringing the 4 Fathers into America when they receive news that the Chinese ship that was bringing a family called the Hongs to them had been impounded by L.A.P.D. Detectives Martin Riggs and Roger Murtaugh, much to his displeasure. Ku asks about the Hong family and it is revealed that they have escaped, leading Ku to order Uncle Benny to find them. Ku and some of his henchmen follow the States Department Man in their car and ram his vehicle onto a level crossing, causing it to be hit by a speeding train and killing him.

The next day, Ku talks to Uncle Benny about delivering the family and that the family's uncle, who is being forced to work for Ku, won't finish his job (which is unknown) until he sees the family. Uncle Benny tells Ku not to worry and that the family will show up, to which Ku tells Uncle Benny that in Hong Kong he would already be dead (for his incompetence). Riggs, Murtaugh and their new partner Lee Butters enter the room and ask Uncle Benny if he knows anything about the ship that they impounded the night before. Benny lies and Riggs sees Ku nearby, looking incredibly irritated. Riggs asks Benny who he is but Benny replies that Ku doesn't speak English before telling the cops to leave. Before they depart, Riggs tells Benny and Ku that they are onto them, while Ku silently mutters to Riggs what he said to Benny earlier, this time in English, proving that he does in fact speak English, but rarely uses it, in which Benny lied. Once outside, Riggs, Murtaugh and Butters find the Chinese captain of the ship and attempt to catch him, but he manages to escape thanks to him being younger man with better stamina. As the captain climbs onto a rooftop and believes he is safe, Ku suddenly appears and attacks him for his failure the previous night. Despite the captain's attempts and effort to fight back, Ku easily gains the upper hand and strangles him to death with his ligature which is kept in to look like a necklace.

It is soon revealed that the Hong family was found by Murtaugh on the night of the crash and that he is secretly keeping them in his house until they are granted an asylum, and the oldest member of the family, Mr. Hong, is in fact the nephew of the uncle working for Ku. Mr. Hong had been writing messages to his uncle and when Ku receives it, he and his men go to Murtaugh's house and take the Hongs away. Ku then takes Lorna Cole, Trish Murtaugh, and Rianne Murtaugh-Butters hostage until Murtaugh and Riggs return home. Lorna manages to get free and she, Riggs and Murtaugh take on Ku's men while Trish and Rianne try to run to safety. Ku intervenes, easily beats them all and has the entire group tied up before setting the house on fire. After Ku leaves, one of the Hong children, named Ping, who had managed to hide to avoid capture frees Riggs and the others and they all escape unharmed.

Ku then travels to the prison where the 4 Fathers are located and promises the general that he will have the money for their release soon. He is also reunited with his older brother Michael and promises to free him soon before leaving. Meanwhile, Riggs, Murtaugh, and Butters go to confront Uncle Benny at the dentist office and give him laughing gas to make him tell the truth, and Benny foolishly tells them about buying back the 4 Fathers and that tonight would be too late. The Hongs are taken to Ku's hideout and one of Ku's men takes Mr. Hong to see his uncle. As Hong wonders what is going on, Ku tells him that his uncle is working for him in order to pay for him and his family to come to America. When the uncle says that he will only finish his job once his family has been taken to their new home, an angry Ku chokes Hong to death and threatens to kill the rest of the family if the uncle does not continue his work. Ku kills Uncle Benny for revealing too much information to Riggs and Murtaugh, and also kills Hong's uncle after the old man's usefulness expired.

It becomes apparent that Ku has counterfeited Chinese money in order to get the 4 Fathers out of prison, and before he can present it to the general, Riggs, Murtaugh and Butters turn up and reveal that the money is fake. A fight breaks out between Triad, General's men and Roger-Murtaugh team in which the general kills three of the 4 Fathers, but Ku and his brother Michael escape from him. During the shootout, Murtaugh tries to shoot Ku but winds up shooting Michael instead. Ku takes his mortally wounded brother below a pier and lays him down on the ground, watching sadly as he eventually dies. Enraged by this, Ku fights both Riggs and Murtaugh and almost ends up killing Riggs, but Murtaugh impales him with a sharp metal pole. Despite the fatal injury, Ku persists and continues fighting and he and Riggs fall into the water off the pier. The struggle continues beneath the surface and Ku attempts to strangle Riggs, but Riggs notices a submerged AK-47 machine-gun lying nearby and grabs it. Before Ku can stop him, Riggs pulls the trigger and pumps Ku's body full of bullets, killing him. Riggs then swims back up to the surface, leaving Ku's corpse underwater.

Peak Psychical Condition: To be added

Master Martial Artist: To be added

Master Tactician: To be added

Ku after killing the States Department Man at a level crossing.

Ku confronting the Chinese Captain before killing him.

Ku leaving Riggs, Murtaughm and Lorna to burn to death.

Ku visiting the 4 Fathers in prison.

Ku about to fight Riggs and Murtaugh.

Ku after being gunned down underwater. 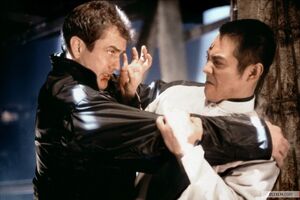