Priest of the Many-Faced God

Serve the Faceless Men and the Many-Faced God

The Waif is a recurring character in A Song of Ice and Fire novels and It's TV series adaptation, Game of Thrones. Her true name is unknown, and her nickname is given by Arya Stark. She is a priestess of the Many-Faced God in the House of Black and White. She is an anti-heroine in A Feast for Crows and A Dance with Dragons, but a minor antagonist in seasons five and six of the television series.

She is portrayed by Faye Marsay.

The Waif was once the only child of an ancient noble house, her father's heir. Her mother died when she was very young, prompting her father to remarry when she was six years old. Her stepmother treated her well, until she gave birth to a daughter of her own. She then wanted the girl to die so that her own daughter would inherit her husband's wealth.

The stepmother asked the Faceless Men for help, but she later tried to poison her stepdaughter herself. The poison did not kill her, but instead left her with a permanent child-like appearance. When the healer in the House of the Red Hands told the girl's father what the stepmother had done, he offered a sacrifice to the Many-Faced God offering two-thirds of his wealth and his daughter so that the Faceless Men would deliver the gift of death to his wife.

His prayer was accepted. The stepmother was killed, and the girl came to the House of Black and White to serve.

In the TV series, she claims the same thing, although she says that she is the one who asked the Faceless Men for help in killing her stepmother and joined them thereafter. She is now a woman grown, who has spent her life serving the Many-Faced God, and will never have any children. Some days, she leads the dawn prayer of the priests and acolytes within the House of Black and White. She frequently deals with poison, including emptying a flagon of poison into the euthanasia pool in the House of Black and White every evening. That, as well as her original poisoning by her stepmother, gives her the appearance of a child. But the waif is not a child, she's actually 36 years old.

In the TV series

The Waif has a sour demeanor and low opinion of Arya Stark when she arrives at the House of Black and White. When Arya presumes to claim that she is "no one" - a skill that the Faceless Men only achieve through dedicated training - the Waif becomes angered and beats Arya with her cane. She overpowers Arya and beats her to the floor before she can react. Jaqen H'ghar then enters the room and makes her stop.

When Jaqen sends Arya out on her first mission to assassinate a Thin man, the Waif expresses doubt as to Arya's readiness and chance of success. Turns out she was right: instead of assassinating the Thin man, Arya murders the Kingsguard Ser Meryn Trant to avenge the death of Syrio Forel. The Waif and Jaqen intercept Arya when she tries to return a mask to the Hall of Faces. By killing the wrong man, Arya has cheated the Many-Faced God. The Waif gloats over Arya's failure and grabs her while Jaqen drinks a vial of poison and collapses. She watches in elation while a distraught Arya weeps beside the body of Jaqen. Suddenly, Arya hears Jaqen's voice saying "he was no one." Arya then turned around only to find Jaqen standing in place of the Waif. As punishment for taking the wrong life, Arya is rendered blind.

The Waif later trains Arya in fighting blind, though seen taking pleasure in hurting her whenever she can. When Arya attempts to fight back, the Waif takes her leave and warns her that she will be back the next day. The following day, she revisits Arya and asks her name. Though Arya replies that she is "no one", the Waif is still unconvinced and beats her a second time. A blind Arya attempts to fight back, only to find Jacqen in the Waif's place. After testing Arya three times, he deems her worthy to rejoin the Faceless Men and takes her back to the House of Black and White.

Later, the Waif continues training Arya in the House of Black and White. She plays the game of faces with Arya, questioning her about her family, the Hound and the people on her kill list. Arya recites her list for the Waif who comments that it is short and cannot be everyone she wants to kill, she then queries if Arya is forgetting 'someone', implying herself. Arya then asks which name the Waif would like her to speak suggesting the Waif is not on her list because Arya does not know her name. Later, she again fights with Arya, at first being able to take the upper hand, but eventually Arya manages to respond and defends herself with her own fighting stick to the point where the Waif becomes visibly distressed. When Arya lands a blow of her own the Waif seemingly becomes overwhelmed with anger and makes a rash move which Arya intercepts. Jaqen latter arrives and asks the Waif to leave them alone.

The Waif fights against Arya with staffs in the temple, defeating her easily; at a certain point, she lays down her weapon. However, the Waif still manages to outmaneuver Arya and punches her to the ground outright announcing that "Lady Stark" will never be one of them. Later, when Arya is tasked with assassinating Lady Crane, an actress who has been playing Cersei Lannister in a play about the War of the Five Kings, the Waif is sent to keep an eye on her. However, Arya refuses to kill the actress, informing her about the attempt on her life and blaming it on Bianca, the actress who plays Arya' sister, Sansa Stark. Thereafter, Arya abandons her goal to become a Faceless Men. The Waif later returns to the House of Black and White to report Arya's failure and asks Jaqen for permission to kill Arya, which he grants.

She eventually manages to locate Arya on a bridge, and approaches her wearing the face of a feeble old woman. Before Arya can react, the Waif pulls out a dagger and repeatedly stabs Arya in the stomach, critically wounding her. However, Arya manages to overpower her and escapes by jumping into the canal, though her wounds begin to bleed out. Assuming that Arya is dead, the Waif takes her leave.

However, she later discovers that her enemy is not really dead, after all. The Waif manages to intercept Arya again, this time in the backstage of a theater and kills Lady Crane, who had been sheltering and nursing Arya. She justifies killing Lady Crane as a duty to the Many-faced God and informs Arya that she had been promised to kill her. Arya runs and the Waif chases her through the streets of Braavos. She leads the Waif in her hideout, where she retrieves her sword. The Waif outright declares that it won't help her, before Arya cuts the candle that provides the only light in the room. The Waif is killed by Arya, as her blind training had provided her the necessary experience to defeat her foe in the dark.

The Waif's face is later transported to the House of Black and White by Arya herself.

The Waif's personality is shown in two different ways in the television show and novels. In the novels, she is an obedient servant of the Many-Faced God, thus she can be considered an anti-hero due to her belief that she does the right thing by leaving Arya blind and her assassinations. In the TV series, the Waif is more villainous, shown as a rather cold, sadistic, emotionless and cruel assassin. She seems to be taking delight in torturing other people, especially Arya, as shown to be pleased when she is allowed to kill her, even more when she nearly stabs her to death. She is also shown as arrogant and overconfident of her abilities, especially when confronting Arya seconds before her death. Therefore, the TV show Waif breaks one of the vows as a Faceless Men, never to take killing personally. 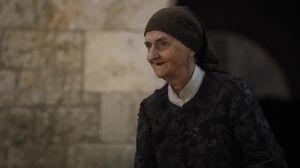 The Waif as an old woman.