Lord of the Crossing

Continuing the legacy of House Frey

Keep House Frey wealthy and powerful (succeeded in wealthy; struggling on power in the books and failed on power in the TV series).
Overthrow House Tully and outlive Lord Hoster (succeeded).
Massacre Robb Stark and his forces (succeeded).
Become ruler of the Riverlands under the Iron Throne (succeeded, though it is nominally ruled by House Baelish of Harrenhal).

Lord Walder Frey is a major antagonist in the Game of Thrones series and A Song of Ice and Fire novels. He also appears as a toddler and minor character in the book prequel The Mystery Knight. He is the Lord of the Crossing, head of House Frey, and lives in the Twins, two castles in a strategic position. In the third novel and third season of TV series, he is the main antagonist of Catelyn's POV storyline, and overall serves as a minor character in Season 1 and a major antagonist of Seasons 3 and 6 in the TV series.

He was portrayed by David Bradley, who also notably portrayed Solomon in the Doctor Who episode "Dinosaurs on a Spaceship", Argus Filch in the Harry Potter films, and Brother Joseph in World Without End.

Walder Frey can be seen as a pervert. He gropes his teenage wife in front of others without a second thought, and even tells Catelyn Stark that his wife's "honey is all mine". He outwardly possesses no shame for his actions, such as making several suggestive and derogatory comments towards Robb Stark's wife, Talisa in front of Robb and his entire house.

He seems to possess a strict code of honor and loyalty or at least an extremely interchangeable one. He made a pact with the Lannisters to murder Robb Stark just for breaking a promise of marriage. This aspect of him is also seen where his sons and daughters constantly try to win his favor. Lord Walder was only conditionally loyal to anyone who could give him and his house a great benefit. Without a second hesitation his allegiances changed instantly from House Stark and House Tully to House Lannister when he discovered that Robb had no intention of fulfilling the promise he made to the Freys. During the War of the Five Kings he first betrayed the Iron Throne and declared for King Robb, then he betrayed him along with his own overlord house, the Tullys.

However Lord Walder Frey is also a hypocrite. Despite the Freys claiming they were justified in the Red Wedding as Robb dishonored them, their reaction is seen as even more dishonorable, including that the end result was a massacre of defenseless soldiers and the fact that he broke the sacred vow of guest right. Walder Frey claims his loyalties are divided as he has sworn oaths to the crown, which is dubious, as when the Tullys called their banners to defend against the Lannister attacks Robert wasn't dead so the Freys wouldn't be breaking their oaths. Lord Walder's hypocrisy is reinforced by the way he chastises the Stark's for betraying the oath he made to him whereas he had outwardly stated to having no respect for the oath he makes to other houses, as the Frey's strategic position at the Twins is far too valuable for their loyalties to be limited by one house alone.

It is said by others that he is a coward. He would not have done something as massive as The Red Wedding on his own accord; it is implied that he only took part in it because Tywin Lannister offered him vast protection.

Lord Walder Frey does have traits of sadism which proves to be even deeper while observing the Red Wedding and is quite irredeemable. This is further reinforced when Catelyn demands Walder to let Robb walk free or she would cut his wife's throat. In response to this Walder replies "I'll find another wife" while nonchalantly sipping his wine. He even shows no remorse over the Red Wedding, displayed when discussing with Roose Bolton he sarcastically toasted him and even did a mocking wolf's howl. This is a scene which had not appeared in the book, where Catelyn kills Walder's grandson, "Jinglebell" Aegon, instead of his wife, and Walder has a bit more reasonable reason to stand by that Jinglebell does not have anything to offer the family and that Catelyn has no leverage in the situation.

Lord Walder is also vengeful and close-minded. Despite his advanced age he has little long-term planning and doesn't seem all that concerned with what will happen to his House when he's dead. He is incapable of allowing himself or House Frey to be dishonored or disrespected in any way such and is embittered over being mocked all of his life over not being able to rally his troops in time. This led to a vengeful deposition for House Tully who mockingly called him "The Late Walder Frey" because of this. 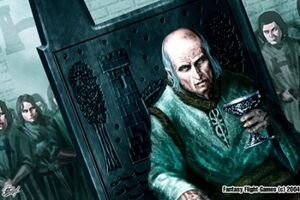 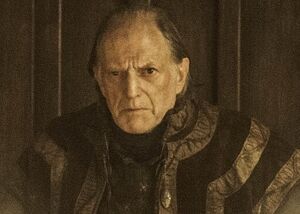 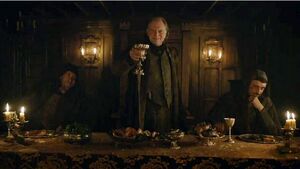 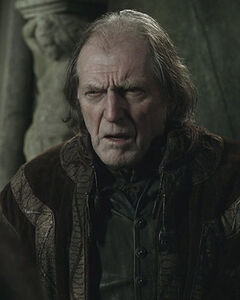 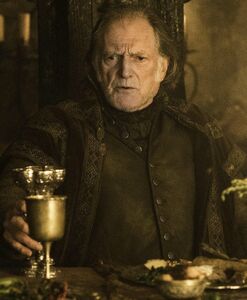