He is angered and resentful of his bastard status. In fact Ser Daven Lannister claims Walder Rivers "Hates that he is a bastard, and hates everyone who's not."

When Chett was caught for the murder of a woman near Sevenstreams, Walder was sent from the Twins to judge him. Chett ended up being sent to the Wall.

The Freys originally join Robb Stark's cause after they force him to agree to marry a Frey. However after Robb breaks the marriage pact they leave. When Robb's grandfather Lord Hoster Tully dies, Walder Rivers and one of his half-brothers Lothar Frey come to Riverrun for the funeral. They agree to return to Robb's side if his uncle Edmure Tully, the new Lord of Riverrun, marries one of Walder Rivers' half-sisters, Roslin Frey. Lothar is amiable throughout the meeting, while Rivers is bad-tempered.

The marriage is a trap, however, the Freys having made an agreement with Tywin Lannister. At the reception the Freys and their ally Roose Bolton murder Robb Stark, his mother Catelyn Tully, and most of their forces, and take Edmure Tully and many nobles prisoner. Walder Rivers leads the attack on the soldiers camp. This becomes known as the Red Wedding.

For the Freys actions Walder Frey's second son Emmon Frey is made Lord of Riverrun. Walder Frey's grandson and heir, Ryman Frey, commands the Frey forces besieging Riverrun, but does so poorly. The Freys are grudgingly assisted by the River Lords however are largely despised by them. In anger at Ryman's incompotence, Jaime Lannister sends Ryman back to the Twins and gives their eldest son Edwyn Frey command of the Frey host.

Jaime finally persuades Edmure to make his uncle Ser Brynden Tully surrender Riverrun, though Brynden escapes. Jaime then finds out from Walder Rivers that Ryman Frey was hanged along with the three Knights and twelve men-at-arms accompanying him within a day's ride of the Twins. When Edwyn accuses his brother Black Walder Frey of their father's death, Walder Rivers says he has no proof, though Edwyn is sure of this. Jaime tells Edwyn and Rivers they will require the captives taken at the Red Wedding. He then asks after Ser Raynald Westerling, whose mother Sybell Spicer has asked after him. Rivers tells him Raynald freed Robb's direwolf Grey Wind from a net, but was hit by quarrels and threw himself into the river. 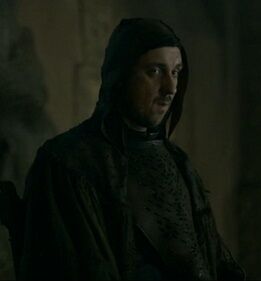 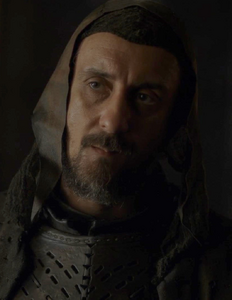 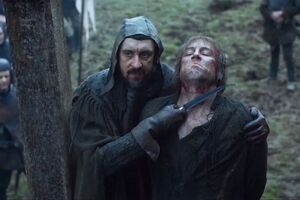 Walder Rivers holding Edmure during the second siege of Riverrun. 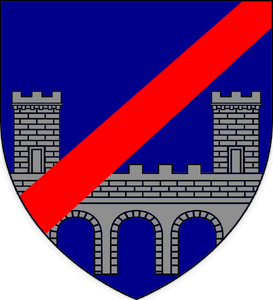 Bastard Walder's personal coat of arms.
Add a photo to this gallery

Retrieved from "https://villains.fandom.com/wiki/Walder_Rivers?oldid=3711564"
Community content is available under CC-BY-SA unless otherwise noted.