Member of the Alvarez Empire's Spriggan 12

Villainous Sentient Machine
Wall Eehto is a minor antagonist in Fairy Tail. He is a machine of the Machias race and a member of the Spriggan 12.

He is voiced by Yo Kitazawa in the Japanese and Derick Snow in the English version of the anime.

He appears during the meeting of the Spriggan 12 and attacks the guild from the west. After Ajeel and Brandish are defeated he tries to kill Freed to destroy Jutsu Shiki and let some other armies invade. After the army is defeated, he is destroyed by Freed and Ichiya. He then tries to kill the members by exploding with his severed head which incapacitates his enemies. Later it turns out this Wall was a puppet.

On the ship the genuine Wall is laughing about two of his partners being defeated and tries to destroy the guild hall, which was stopped by the ship Christina. Some later he uses missile to take some soldiers out. One day later he observes the battlefield, but is attacked by Laxus. Wall thinks having the advantage, because Laxus is poisoned, but Laxus tricks Wall to healing Laxus, which makes Wall confused. Laxus then uses an attack to destroy Wall. During the meeting a Historia on Wall is created by Neinhart to protect the creator and the Emperor. He later tries to attack Team Natsu, but is distracted by Minerva, who he manages to overpower, but is defeated later and dissolves short after. 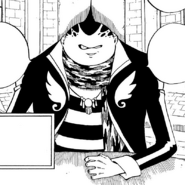 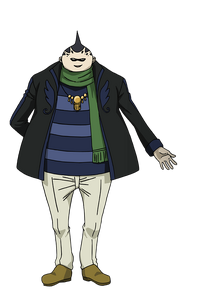 Wall's puppet in the anime.