Interim Administrator of Earth
Humanity's Representative of the Combine

Enforce the Combine's stranglehold on the citizens of Planet Earth (succeeded).

Dr. Wallace Breen is a character in the Half-Life franchise, mentioned in passing as the Administrator during the events of the original Half-Life and its expansions, before appearing as the main antagonist in the sequel Half-Life 2.

Wallace Breen was the former administrator of Black Mesa prior to the Black Mesa Incident and the Seven Hour War. Following the Combine's subjugation of Earth, Wallace managed Earth's surrender in exchange for immunity from the Combine, but at the cost of human enslavement.

He was voiced by the late Robert Culp.

Wallace Breen was the administrator of the Black Mesa Research Facility in New Mexico, and frequently collaborated with the Anomalous Materials research team in Sector C. Here, Breen worked alongside several colleagues, including Isaac Kleiner, Eli Vance and Gordon Freeman, all of whom would later oppose him. It is hinted that Breen in some part was responsible for the Incident, as he had supplied the sample for the Anti-Mass Spectrometer; Xen crystals, found next to many deceased Survey Team members, indicating a great human cost and the "lengths" he had to take to find them. The G-Man, also present at Black Mesa, is revealed to have been stealing one of the crystals, revealing a connection between him and Breen.

Following the incident, after the Seven-Hour War, Breen negotiated an agreement with the invasive force, the Combine, agreeing in exchange for immunity to be Earth's administrator and the Combine's human representative at the expense of humanity's freedom, although in actuality the Combine were using him as a puppet and a face for the higher forces in the organization. Breen had been criticised for their action, although he defended himself.

Breen was seated in power in City 17, a Combine-occupied city in Eastern Europe, to which he ruled with complete control over its citizens, enforcing an oppressive fascist government. Breen had fortified himself above ground in the Citadel, where he had set his primary base of operations establishing a communication with the Combine. It is implied that Breen helped spread Combine propaganda across City 17, issuing Breencasts which establish a second connection between Breen and the citizens of City 17. This is seen in various points of City 17, prominently in the train station, where Breen is welcoming the citizens.

By the events of Half-Life: Alyx (although never making a direct appearance), Breen continued to be seated in power, and continued to oversee Combine operations in City 17. Later, according to Breen's remarks in the final chapter Dark Energy in Half-Life 2, it is implied more than ever that Breen was aware of the G-Man and his employers. It is strongly inferred due to the Scientist's knowledge of the G-Man, that Breen oversaw the G-Man's imprisonment in the Vault above the Quarantine Zone, and knew what he was capable of.

Breen is first seen in the prologue welcoming newly arrived citizens to City 17 in one of his many Breencasts, commenting that "It's safer" in the apparent capital city of Earth.

Following Gordon Freeman's deployment into City 17, Breen is alerted by his arrival, and his past as a scientist who was a part of the test which caused the Black Mesa Incident. Breen and Freeman meet in the flesh when the latter's teleporter malfunctions, accidentally transporting him to Breen's office. Breen recognized Freeman in the encounter, issuing a manhunt in the slums of City 17.

Breen manages to capture Gordon Freeman who willingly delivers himself to Breen's office in his headquarters the citadel, where he is holding Eli Vance hostage and also his daughter Alyx. He tries to make a deal with Gordon Freeman, and shows signs he is aware of Freeman's control by the mysterious G-Man. But Breen's agent Judith Mossman turns on him and frees Gordon along with Alyx and Eli. Breen attempts to escape using a teleporter to the combine world. Realizing that he cannot survive in the Combine world's atmosphere, he reluctantly agrees to have his mind placed in a host body, which is a Combine Advisor, a strange grub-like creature and the apparent rulers of the Combine. But before he could escape through a Combine teleporter, the platform Breen was standing on collapsed when Gordon destroyed the teleporter in a massive explosion, dropping Breen down the Citadel to his presumed death.

Breen appears in Episode One, first in the opening in a flashback/ dream sequence questioning Gordon via video screens, and then later on in a pre-recorded message talking with the combine adviser about him being placed in a host body. When Alyx first sees this footage she first believes Breen survived, until realizing that it is just an old recording. Alyx confirms Breen's fate prior to the teleporter explosion, that he did indeed fall off the Citadel.

In Episode Two when The G-Man has his "heart to heart" with Gordon Freeman and at the moment he mentions "naysayers" against him rescuing Alyx Vance from Black Mesa, Breen's face briefly flashes up on a screen behind him.

In a leaked draft by Marc Laidlaw concerning the unreleased game, it is revealed that early memories of Breen was transferred into the body of a Combine Advisor, which is confronted by Freeman and Alyx. Breen is shown to be in misery over his existence and asks to be killed, a choice which was apparently up to the player to carry out. 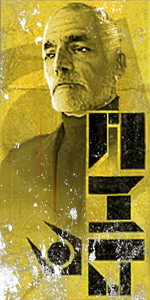 Propaganda scattered across City 17, establishing Breen as the oppressive ruler of Earth]] 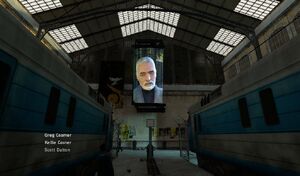 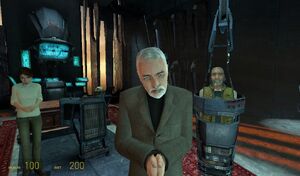 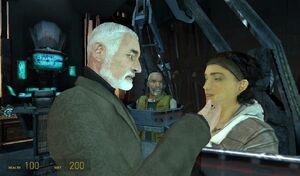 Breen mocks and threatens Alyx Vance.
Add a photo to this gallery 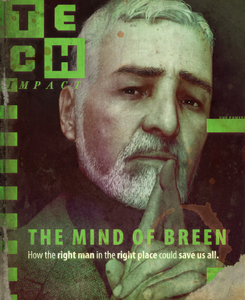 Breen, featured on the front cover of an issue of Tech Impact magazine - "The Mind of Breen: How the Right Man in the Right Place Could Save Us All". 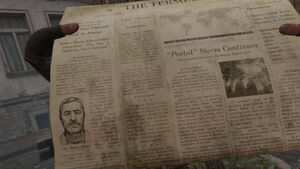 A newspaper entailing Breen's negotiations surrender to the Combine.
Add a photo to this gallery

Retrieved from "https://villains.fandom.com/wiki/Wallace_Breen?oldid=4059700"
Community content is available under CC-BY-SA unless otherwise noted.