Villains Wiki
Register
Don't have an account?
Sign In
Advertisement
in: Related to Hero, Incompetent, Greedy,
and 45 more

All are usually referred by their first names

Assist their mom in taking over the world.

Incompetent Hegemons
Walt, Larry, and Igner are Mom's sons and henchmen and are major antagonists from the show Futurama. They are devoted to serving their mother and her schemes, as she often sets them out on dubious missions. Despite their comical personalities and characteristics, they often succeed in their tasks.

However, despite their unending love for their mother, they would sometimes not be in favor of her overthrowing humanity, and would not hesitate to team up with the other characters (presumably the Planet Express Crew). At one point, one of their plans involved Professor Farnsworth getting back together with Mom, thinking she might be happy and change her mind.

Walt is one of the recurring antagonists. He is the oldest and most intelligent of Mom's three sons. He owns 0.1% of MomCorp, while his brothers Larry and Igner own the remaining 0.2%. He is the most like his mother in personality, with deeply devious and malicious tendencies. He has on multiple occasions abused his younger brothers. In his mother's absence, he takes charge of the situation. What keeps him in line is his apparent Oedipus Complex - he has an unhealthy admiration for his psychotic mother, despite her regular abuse of him, and has even admitted that someday, he wishes to marry a woman like her.

Despite Walt's supposed intelligence, the plans he concocts are markedly ridiculous, such as impersonating Mr. Panucci to elicit information from Fry and having the trio pose as owl exterminators to get the anti-backward crystal when he knows absolutely nothing about owls or their extermination. They only work because it's Fry the plans are mostly directed at.

Another example of Walt's childishness is shown in the episode Mother's Day. When he learns that Professor Farnsworth is the man who broke Mom's heart, like a child whose parents have separated, he assumes that bringing Farnsworth and Mom back together should be a simple task that will make her happy and thus everything will be alright again. Another example is in Overclockwise, where after he and his brothers lost in a video game thanks to Bender and Cubert Farnsworth, despite him saying that they'll handle this situation as matured adults, he instead whined and complained to Mom about them "didn't play fair."

Larry is the sniveling and shy middle child of Mom's three sons, and is somewhat less intelligent than Walt, but nonetheless the most stable of the three. Unfortunately, he is entirely submissive to his older brother and mother, agreeing with everything thеy say. He apologizes for almost everything that goes wrong, even when it's not his fault, and thanks to his mother for insults and slaps.

Larry is struck the most often of all of Mom's sons, and not as one would think, Igner. This is probably because the writers decided that having Igner struck for his immature statements and infantile behavior would be a lot less funny than striking Larry for no reason.

Of the three sons, Larry seems to be the most normal and has been shown trying to get a date in the series and in the comics. In Put Your Head On My Shoulders he is seen standing outside Bender's dating service for the miserably lonely. In issue #34 of the comics, he is shown using speed-dating and is implied to have a crush on Amy and talking briefly to her, who comments that while he seems a nice guy, but she already has a boyfriend.

Igner is the youngest and most pitiful of Mom's three sons. Like his brothers, he owns a 0.1% share in MomCorp. His intelligence is extremely low, and he often displays the symptoms of mental retardation. He speaks in a stereotypically moronic voice, and is often found saddled with the worst tasks by his brothers, being bullied into wearing Mom's bra, and playing the part of Pamela Anderson's body for her head in a jar. His immaturity means he gets disgusted easy, and he has a tendency to repeat what he hears without full comprehension, for example: in Bender's Game, Igner repeats the phrase "We're owl exterminators" twice, and pronounces exterminators wrong.

In Bender's Game, Igner helps Fry, Leela, and Farnsworth escape his pursuing brothers, by denying that he had seen anybody to Walt. However, while everybody else was going along with the Dungeons and Dragons/Lord of the Rings parody, Igner's alternate reality persona got confused and pulled out a lightsaber, and started parodying Star Wars.

It was revealed in Bender's Game that Igner is the son of Professor Farnsworth, making him the distant nephew of Fry and half-brother of Cubert, while his brothers have so far been assumed as the sons of Mom and Wernstrom. 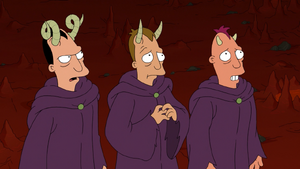 Walt, Larry, and Igner's half-demon forms while in the Dungeons and Dragons/Lord of the Rings world in Bender's Game.