Obtain the Mask of Loki for Pretorius and/or himself (animated series).

Kill any who cross him.

Brutish Mobster
Walter is a recurring antagonist of The Mask animated series and comics. Seemingly invulnerable, Walter has never shown pain and is the only one who can injure Big Head to any real degree and he is the only one able to make the wearers of The Mask feel pain. He is regarded as the Mask's arch-enemy.

In the comics, Walter is a maniac, who likes to commit violent acts, both on himself and others. He is not interested in the Mask, and fights against it's bearers on numerous occasions, and even kills some of them.

When he attempted to put on the Mask, it didn't work.

It was revealed Walter runs for Mayor of Edge City.

He chased the Mask for several episodes, when he obtained it, it failed to work for him (a moment taken directly from the original Dark Horse Comics in which "Walter" was a recurring character), he simply dropped it. Walter remained a recurring character throughout the series. He is strong enough to actually break the Mask in two. An impressive feat as only seconds before the Mask withstood being hit by cars and run over by a steamroller without a scratch.

Even though he's already getting and putting on the mask (he spends a good part of the first season trying to get it, even without Pretorius's orders), for some reason, it does not work on him. 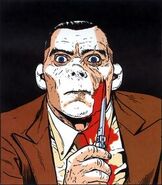 Walter in the comics, before having his face scarred.