Enforce white supremacy in Sinclair Parish (succeeded for a while).

Kill Ezekiel Dandridge to gather his files and cover up the murder to prevent the evidence being used in court (succeeded).
Stop Laveau's Movement before his position is really threatened.
Exterminate all Afro-Americans in Sinclair Parish.
Kill Lincoln Clay (both failed).

Walter Beaumont is the main antagonist of the Mafia III DLC Faster, Baby!. He is the racist sheriff of Sinclair Parish who uses his connections and power to keep the parish all white by getting rid of all black residents, and later attempts to cover up his crimes. He is defeated by Charles Laveau, his daughter Roxy, and their ally Lincoln Clay.

He is voiced by John Edward Lee.

Walter was working as sheriff in Sinclair Parish. As a white supremacist, he runs his Sheriff's Department as though Jim Crow is still the law of the land. He and his deputies operate with absolute impunity and use their power to keep the population of his town white through intimidation, harassment, and even murder. He has influential friends in state government and the Southern Union, who fully support his efforts, financing his upcoming bid for re-election.

In 1967, Charles Laveau and his activist movement began building a civil rights case against Beaumont and his police department, and gathered evidence and witness testimony to present at the federal court. One man in Laveau's movement was named Ezekeil Dandridge. One night, Dandridge had finished collecting some evidence when he stopped to use a pay phone to touch base with Charles. Dandrige was then met by Sheriff Beaumont, who wondered if he was having car troubles. Dandridge said no, he was only passing through. Beaumont then said it was a lovely night for a drive, then asked who was on the phone. Dandridge lied that he got lost on the way to visit his grandmother, and called her to let her know he will be late. Sheriff Beaumont said it was considerate of him, then said "Well go on, do not let me keep you from your grandma". Thinking he was free, Dandridge proceeded to the car, only to be shot in the back of the head by Beaumont. Beaumont then searched the car and found a folder in the front seat. Perusing the folder, Beaumont says papers and photographs showing him and his deputies engaging in police brutalities, and remarked to himself "Shit!". Beaumont took the folder to his office at headquarters, then placed the Parish on high alert so he could track down the witnesses, and kill anyone who tried to stop him. Charles' daughter, Roxy and their new found ally, Lincoln Clay started causing trouble to rescue the witnesses. Despite this, Beaumont learned of Lincoln's location at the De Costa family farm, and decided to capture him.

Beaumont managed to capture Lincoln, and had him tortured by his friends while mocking him and his people for trying to get him exposed. However, Lincoln is freed by Roxy, and Slim panics and runs off with the folder. Slim is chased by the two across the Parish while his deputies attempt to stop Lincoln and Roxy. He is cut off by the railroad tracks when a freight train is coming. He then tries to escape on foot, but ends up in a graveyard where he is cornered by Roxy and Lincoln. Beaumont laments how he always thought he would die on his front porch, and tells Lincoln and Roxy to kill him. The two refuse however. Lincoln says that that will achieve nothing, but being kept alive and being made to face the music for his misdeeds will bring about positive change. Roxy adds that being a white cop with a reputation for racism will make him popular in the cellblock. In a last effort to mock the two, Slim declares that he will get away scot free as he knows powerful people, but he's knocked unconscious. Lincoln then loads Slim into the back of Roxy's truck and takes him to Laveau's compound. Some time later, he is remanded to the FBI.

Beaumont's arrest and conviction became nationwide news, and Walter revealed names and implicated over a dozen conspirators in the Sinclair Parish Department. He also named members of the Southern Union, a white supremacist organization, some of whom were in positions of power in the Lousiana legislature and had bolstered him politically. Walter Beaumont was sentenced to 15 years imprisonment for the murder of Ezekiel Dandridge. He did not get the maximum sentence on account of his cooperation with authorities in helping to root out the influence of the Southern Union for state politics. During much of his imprisonment, Beaumont was isolated from the other prisoners, spending much of his hours in solitary confinement, which the guards declared was for his own safety. After spending 12 years in prison, Beaumont became eligible for parole. His parole hearing was approved, and he was released from prison where he bought a house in an unknown location, presumably to retire in obscurity.

In 1989, Walter Beaumont died when he was shot point blank while sitting on the front porch of his house. To date, no one has ever stood trial for Beaumont's murder, and there has been insufficient evidence to prepare charges against anyone. 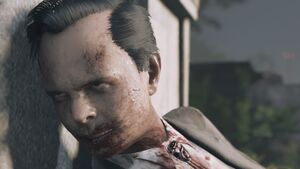 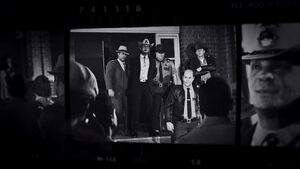 Slim arrested for his crimes. 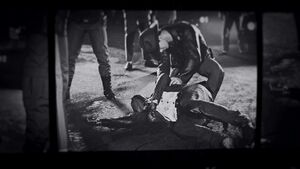 Slim's corpse being looked over by the police in 1989.