Lord of the Forest of Eternal Night

Defeat Leon Belmont for his amusement.

Walter Bernhard is an extremely powerful Vampire Lord ruling the Forest of Eternal Night, who serves as the central antagonist of Castlevania: Lament of Innocence. After Leon Belmont defeats him however, it is revealed that he was but a pawn in Mathias Cronqvist's plan to take his place.

Walter is in many ways the typical vampire, cruel, ruthless, domineering, uncaring and sadistic, with a cold demeanour and an imposing, threatening presence. He acts in a very poised and dignified way, welcoming people while making clear that they are his preys, lacing his taunts with a veneer of courtesy and a smug smile. However, his gloomy yet luxurious castle filled with recreational areas shows that he has excellent taste, vast culture and interest in science.

Walter is haughty, condescending, arrogant, boastful and horribly selfish. He is exceedingly confident in his might, and delights in demonstrating it by tanking attacks that he knows cannot affect him. Despite this, he is not satisfied and wants more, desiring nothing less than absolute power.

Nevertheless, he is content with having power just to feed his ego, never displaying much ambition or putting real effort in searching for the artifact he covets. Either because he believes to have all the time in the world, or simply out of sheer laziness.

Walter is bored by his centuries of existence without any opposition, so he entertains himself with battles. He abducts people close to the best warriors around, to force them in survival missions against his hordes of monsters. He delights in tormenting people, enjoying the gruesome ordeals he pushes his preys through, before breaking their spirits by pretending to grant them their prize, having in fact already doomed them so that they never had any hope to begin with.

All in all, he is little more than a despicable, overgrown bully, who delights being at the top and to lord over those he regards as inferiors. He plays high and mighty and craves for a challenge, but only as long as he remains in control. If not, all hell breaks loose.

Walter was at the time the most powerful vampire in existence. He displays the superhuman strength and hypnotic gaze common in vampires, but to an enormous extent. He can send a well-built adult flying with a punch, and cower even the best warriors with a mere stare. He most likely have the power to turn into a bat, a wolf or a cloud of mist, to command feral beasts, to control the weather, and to crawl on walls, but he never displays them.

Walter wields tremendous dark powers, though whether he really has them or owes it all to the Ebony Stone: the alchemic jewel that controls Darkness he wears remains ambiguous. Considering the vast dark powers wielded by other Vampire Lords and Ladies of the series, it is safe to assume that he is genuinely this powerful, with the Stone vastly boosting his might and granting him additional abilities. Mathias targeting him to gain his power is proof of his level.

The Stone does make him virtually invulnerable, able to shrug off even the most powerful weapons forged specifically to destroy him. It also enables him to keep his domain under the eternal night that gives it his name. The stone might also be the source of the ability to resurrect he boasts about, and some of his attacks, namely "Hellfire" (three fireballs in different directions) and "Demonic Meggido" (a tremendous explosion of energy). The three would become a staple of Dracula's powers.

Walter's origins are unknown. He is stated to have become a vampire at forty-two years old, but how he became one and how long he ruled is never explained. At one point, he came in possession of the very powerful Ebony Stone.

Whether he had established his rule before obtaining it or needed it to do so is unknown. Though other Vampire Lords building huge castles and domains on their own hints the former. He used it to enshroud his domain in an everlasting night. He coveted the second and mightiest alchemic stone, the Crimson Stone, but could not find or forge it.

At some point, he tempted a young man named Joachim Armster with immortality and turned into his vampire lieutenant. But Joachim coveted his throne and fought him, only to be soundly beaten and having all of his attacks failing. Walter spared Joachim, throwing him in a jail blocked with a waterfall (since immersion in running water is lethal to undeads) to use as a guard whether he wants it or not.

To alleviate the boredom of immortality, he took the habit of forcing brave and powerful humans into games of hunters and preys. And to raise the stakes and force his target to go and challenge him, Walter would steal what was most important to them. He distributed five magic orbs able to open the way to his innermost sanctum to each of his lieutenants, forcing his targets to kill them in order to reach him.

At one point, Walter turned Justine, the daughter of the powerful alchemist Rinaldo Gandolfi, into a vampire and had her slaughter his family, forcing Rinaldo to kill her. Enraged, Rinaldo tried to challenge him but failed to defeat the Succubus. Walter allowed Rinaldo to provide assistance to future challengers, to spice up the game. A decision who would later prove his undoing.

The story starts during the crusades of 1094, with Walter's hordes of monsters invading the lands of Baron Leon Belmont, who had to renounce his title in order to leave the crusades and defend his domain, and also rescue his recently abducted betrothed Sara Trantoul.

In fact, it was Lord Mathias Cronqvist, broken by grief due to the death of his wife, who persuaded Walter to abduct her to lure Leon, a warrior without peer. Being in possession of the Crimson Stone, Mathias planned to use it to steal Walter's soul and gain his powers, counting on Leon to kill him.

Having been told by Mathias that Walter had taken Sara, Leon went to the Eternal Night to get her back. There he Rinaldo gave him a whip crafted through alchemy to fight Walter's monsters, and enchanted his gauntlet to use relics found in the castle to cast powerful spells. Rinaldo then explained to him the nature of Walter's sick games, and how to reach him.

Leon defeated the five guardians, including Joachim who mentioned the Ebony and Crimson Stone before dying. Leon managed to find out from Rinaldo that the Crimson Stone could convert the souls of slain vampires into power for the owner. As he returned to the castle, Walter greeted him, dropping Sara from the balcony for him to rescue. He attacked at once, but to no avail as the whip had no effect, forcing him to flee.

However Walter had bitten Sara, causing her to start transforming into a vampire. Rinaldo revealed to Leon he'd have to sacrifice her to make the whip at all effective against the Vampire Lord. He reluctantly did so when she begged him to, creating the extremely powerful Vampire Killer Whip, and went to confront Walter a final time.

Armed with a weapon that could hurt him, Leon succeeded in killing Walter. The fallen Vampire Lord boasted that the Ebony Stone would resurrect him eventually, but his soul was then taken by Death and given to Mathias, who went on to become Count Vlad Tepes Dracula, the King of the Night.

Walter is highly powerful and his attacks are dangerous, but he is rather easy to defeat. The battle is interrupted after Leon first harms him, before starting for real. He hovers over the ground and fights exactly like Dracula does, launching magic attacks in between teleports, but he leaves himself open to attacks and his apparitions are telegraphed by a pillar of light, enabling Leon to dash toward it and attack as he appears.

Walter mainly attacks with "Hellfire": here three huge fireballs that explode at short distance, but he can lunge at Leon to land a powerful punch, and shoot three blue interwoven homing rays (Leon must get away and dodge at the last moment.) When down to his second life-bar, Walter will use two new attacks: several spirals of blue energy quickly erupting from the ground where Leon stands, and teleporting near his throne and turning into a giant bat-monster to unleash "Demonic Megiddo": an explosion of energy nearly engulfing the room, which deals crippling damage and can only be escaped by rushing towards the opposite walls. 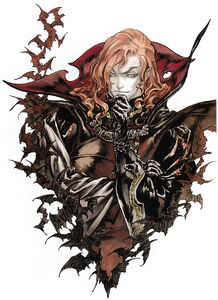 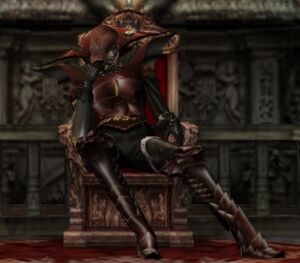 Walter slouching on his throne. 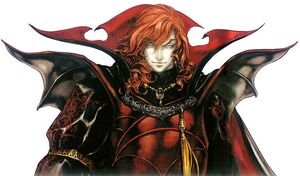