Taking credit for others' art.

Become a famous artist by taking the credit for his wife's work (failed).

Walter Stanley Keane is the main antagonist of Tim Burton's 2014 biographical drama Big Eyes. He is the husband of Margaret Keane who revels in taking credit for people's arts (including his wife's) and gaining fame from it.

He was portrayed by Christoph Waltz, who also played Ernst Stavro Blofeld in Spectre and No Time to Die, Mandrake in Epic, Bert Hanson in Horrible Bosses 2, Chudnofsky in The Green Hornet, Léon Rom in The Legend of Tarzan, Cardinal Richelieu in The Three Musketeers, and Hans Landa in Inglorious Basterds.

Walter is first seen when the recently divorced Margaret hopelessly tries to sell her art. Keane is having no trouble selling his Parisian street paintings, but he seems to be charmed by Margaret's art. He compliments her, and the two artists fall in love. When Margaret discovers that she cannot live without a husband, Keane instantly proposes to her, to which she accepts, so they marry. Margaret attempts to have her paintings hanged on the wall of a jazz club and Walter manages to convince the club's owner to let her do it. To Walter's surprise, however, the customers appear to be interested in Margaret's paintings, not his. Shortly after, Keane has a fight with the club's owner and ends up on the front page of a local newspaper.

This seems to work out for the better, since the publicity makes a lot of people interested in the art. When Keane shows up at the scene, he realizes Margaret's potential and sells many paintings in his own name. When he gets home, he eagerly shows Margaret the money and explains that if he poses as the painter, they'll have an easy time selling these paintings. Margaret agrees to do this at first, but soon becomes frustrated when Keane continuously takes all of the credit for her work. Because of this, she develops a new style so that she can at least draw something and put her name on it, but Walter seems to be insulted by her actions.

Eventually, Margaret makes a horrible discovery - the Parisian paintings were not by Keane at all, but by another artist with the signature S CENIC. She confronts Keane for this, and despite his desperate excuses, she broken-heartedly leaves the room. Keane gives up and admits that he'd always wanted to be an artist, but simply didn't have the talent to paint. This doesn't change his intentions, however, as Keane forces Margaret to create a "magnum opus" for the New York's World Fair. At this point, Margaret's daughter Jane soon discovers that she's the real painter, but she gets too intimidated by Walter to let everyone know the truth.

The finished painting, entitled "Tomorrow Forever", receives a scathing review from art critic John Canaday, which infuriates Walter. He has a drunken tantrum and starts throwing lit matches at Margaret and Jane, causing a large fire. This is the last straw for Margaret and Jane, who then leave Walter by moving to Hawaii while Margaret files for a divorce. Despite this, Keane soon calls Margaret and gives her an ultimatum: he remorselessly demands for 100 paintings and the rights to all of her previous works, otherwise he won't sign the divorce papers. A helpless Margaret reluctantly cooperates and starts sending him paintings, but after encountering some Jehovah's Witnesses who tell her about the importance of honesty, she starts signing the paintings with MDH Keane, much to Walter's annoyance.

Margaret then unexpectedly reveals that she's the real artist on a random Hawaiian radio show, which makes national news. Walter responds with an article in USA Today, claiming that his wife has "gone nuts", to which Margaret sues him and Gannett (the company that owns USA Today) with slander. Walter initially enters the courtroom with numerous lawyers, but they reveal that they are only their to assert that Gannett was only reporting on his claims in relation to a significant public event, and thus they are immune to Margaret's prosecution under the First Amendment. After the judge quickly dismisses their case, the lawyers leave the courtroom and Walter is left with no legal representation; rather than postpone the trial and use the time to hire an attorney, he decides to defend himself, using the knowlegde of law he acquired from vague memories of watching Perry Mason.

When asked by the judge to testify, Walter explodes into a manic rant, boasting about his apparent legitimacy and he how he has met countless celebrities. The judge then demands that they both draw a painting in one hour to prove who's the real artist, leaving Walter devastated. Instead of drawing anything, he emptily stares into the air while claiming to be "getting ready" while Margaret starts her own painting. When there's almost no time left, he suddenly grunts in pain and claims that his arm hurts, rendering him unable to paint. However, the judge sees through his blatant lie and Margaret completes her painting and wins the lawsuit, gaining $4 million in damages and leaving Walter in bitter defeat.

In the film's epilogue, it is told that even after being exposed and shamed of his actions, Walter continued to insist to the world that he was the real artist despite producing no evidence to back up his claims, and eventually died penniless the year 2000 at the age of 85. 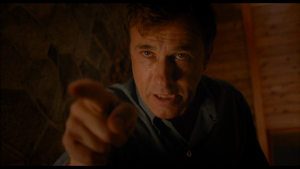 "You failed me with your painting!" 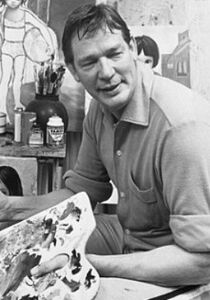