Get back at Dylan Rhodes and The Four Horsemen for committing a robbery perceived to have been committed against him and his father Arthur Tressler while alongside and on the behalf of him (succeeded briefly, later failed)

Walter Mabry is one of the two main antagonists (the other being Arthur Tressler) of the 2016 film Now You See Me 2.

He is a technological prodigy tycoon, a business leader, a science admirer and the son of banker and business leader Arthur Tressler himself. He aids his father in his attempts to get back at The Four Horsemen for ruining his business.

He was portrayed by Daniel Radcliffe in his first villainous role.

Walter is the illegitimate biological child of renown banking and insurance magnate, Arthur Tressler. It was attend at one point that Walter did love magic tricks and "dabbled" with them in high school before he became fascinated with, what he perceived to be actual magic; science and technology.

When the four main characters called The Four Horsemen and their leader Dylan Rhodes secretly arranged for a robbery to be committed against Walter Mabry's father Arthur Tressler of his money from his bank account, it was perceived by Walter Mabry to have been them having managed to have also stolen money from him as well, and plotted revenge along with his father. Walter Mabry had a business partner named Owen Case, who took over complete leadership of Mabry's company for his own reasons. Walter Mabry faked his death (an idea he got from one of The Four Horsemen) and planned a way to get back at Owen for it as well. He came up with a perfect plan for it in which he would use The Four Horsemen as a means of managing to do so and to obtain a technological data chip called "The Stick".

After Dylan Rhodes refused to give the stick to Mabry, his men went to capture him. Only to bring Rhodes to his father, Arthur Tressler the man who wanted revenge after The Horsemen left him and Mabry broke.

Later In London, The Horsemen successfully brought Mabry to justice after exposing him and his father as a fraud for trying to steal people's data. After being captured by the FBI and INTERPOL, Tressler decided to disown Mabry, realizing he had no idea who's bastard was his mother.

Mabry is shown to an admirer of science and technology, believing that through such means actual magic is possible. Prior his admiration of science, Mabry admitted to "dabbling" in magic tricks during his educational learning years (which he notes to be common "pass-the-time" practice for students void of a sex life in academia) and was fascinated by them at the time. Mabry even shows loyalty to his father, and was going to go through severe lengths to punish the Horseman for humiliating his father and robbing his money.

Mabry is shown to hold grudges, such as his vendetta against Owen Case who took complete leadership of Mabry's company by exposing his personal files to the Board of Directors. Mabry does at times show off a need to impress attitude, as he did so with the Horseman when the officially met him, and he showed them pictures of them unconscious with him on the plane, which he turned into some kind of photo collage like presentation. Whether those pictures were taken out of admiration or mockery was never revealed. 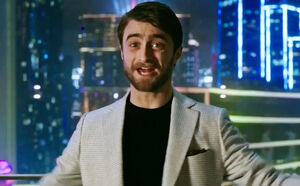