Walter Peabody is one of the supporting antagonists of the videogame Scooby-Doo! Mystery Mayhem, alongside Robert Zabrinski and Mindi Stiles.

Everyone from the library had left from the mysterious hauntings, except him. After Shaggy Rogers and Scooby-Doo, along with the rest of the gang, go on a wild goose chase, they met up with a spooky hooded figure. After they capture the figure, it was revealed to be none other than Walter.

The gang found a telegram for Walter, with instructions for the Tome of Doom reading, "S.D.", Walter was then hauled off to jail, with the telegram remaining ambiguous, till the final episode. 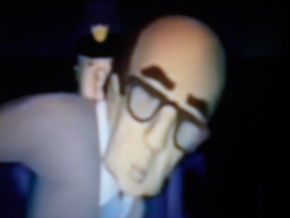