Walter Peabody is one of the tertiary antagonists of the videogame Scooby-Doo! Mystery Mayhem, alongside Robert Zabrinski and Mindi Stiles.

Everyone from the library had left from the mysterious hauntings, except him. After Shaggy Rogers and Scooby-Doo, along with the rest of the gang, go on a wild goose chase, they met up with a spooky hooded figure. After they capture the figure, it was revealed to be none other than Walter. The gang found a telegram for Walter, with instructions for the Tome of Doom reading, "S.D.", Walter was then hauled off to jail, with the telegram remaining ambiguous, till the final episode. 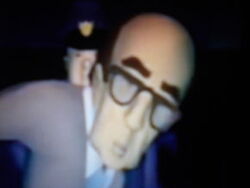 Retrieved from "https://villains.fandom.com/wiki/Walter_Peabody?oldid=2162291"
Community content is available under CC-BY-SA unless otherwise noted.