Feeding his own ego

Use Mechagodzilla to enslave the Titans if possible and exterminate the ones he can't control.
Turn humanity into the sole dominant species over the Earth; due to his fanaticism that they are the superior species.
Provoke Godzilla into killing millions in Hong Kong so he can unleash Mechagodzilla to kill him.
Satiate his inflated ego by creating something that can topple the Alpha Titans.
Become glorified by the world as a hero.
Make sure that his conspiracy is never exposed.
Rule the world systematically through Apex Cybernetics as a corporate empire (all failed)

Walter Simmons is the central antagonist of the 2021 crossover film Godzilla vs. Kong and its novelization.

Walter was the CEO of Apex Cybernetics and the father of Maia Simmons. Desiring to defeat all Titans in the world, Simmons opts to building Mechagodzilla after getting the severed left head of Ghidorah.

He was portrayed by Demián Bichir, who also played Marcos Mendez in Machete Kills and Marco the Mexican a.k.a Señor Bob in The Hateful Eight.

Walter Simmons stated he was inspired to do what he did starting in 2014, when Godzilla and the M.U.T.O.s first emerged and Titans' existence was first revealed to him and the public. His goal was to make humanity the unquestioned dominant species of Earth over all the Titans, and moreso for himself and his company specifically to be glorified for being the ones to achieve this. His remark to Madison Russell about how "there can only be one Alpha" implies he intended to kill any and all Alpha Titans humanity encountered so they could be the sole apex species.

The novelization goes into further details about Simmons' past. Here, Bernie Hayes at one point speculated that Simmons' goal was to enslave the Titans if possible and kill any Titans that he fails to enslave, so he can rule the world with humanity as the sole dominant species. In 2019, Simmons was involved in the creation of the Oxygen Destroyer for the military so they could kill Godzilla, and he bribed his way out of any involvement in the disaster following King Ghidorah's rampage. When Bernie Hayes' wife Sara discovered Simmons' involvement with the Oxygen Destroyer, Simmons had her assassinated in a car accident to cover up his tracks. He purchased the skull of Ghidorah's severed head (two skulls in the novel, though the origin of the second skull is unexplained) from a mysterious buyer who is heavily implied to be Alan Jonah so he could construct his own cybernetic Titan to combat the Titans; thus, beginning the development of Mechagodzilla.

Five years later, in 2024, all Titans excluding Godzilla and Kong have gone back to hibernate all across the world. Godzilla then attacks an Apex facility manufacturing Skullcrawler eggs that are transported to the Apex headquarters in Hong Kong. During a test battle against a Skullcrawler and Mechagodzilla, the test is cut short due to limitations of the power supply. After learning of the Hollow Earth, Simmons intends to harness the raw energy of Hollow Earth to overcome Mechagodzilla's limitations.

Simmons recruits Nathan Lind to explore into the Hollow Earth and obtain a sample of the energy, using his daughter Maia as the leader of the Apex expedition. After having Mechagodzilla tested against a Skullcrawler, which is sliced in half with its proton beam, Simmons activates its signal from the Apex headquarters in Hong Kong, to lure Godzilla there and kill off millions of innocent people in his warpath before Simmons sics Mechagodzilla on him to kill him and have himself seen as a hero in the public's eye. As soon as Godzilla wreaks havoc in Hong Kong, Simmons watches on in glee and excitement, fully confident that his plan was going to work.

Apex soon finds an energy source and sends its signature back to the base. They also catch Bernie, Josh, and Madison and have them interrogated by Simmons. When Madison calls out Simmons for using Ghidorah to create Mechagodzilla as the reason Godzilla rampaged, claiming hundreds to thousands of lives, he shows no remorse for his actions, and instead excuses his actions by claiming it's every sacrifice to be necessary to ensure humanity's survival. Eventually, Simmons desperately orders the activation of Mechagodzilla, despite not testing the energy source first. This causes Mechagodzilla to go haywire, as the energy source causes Ghidorah's consciousness to possess Mechagodzilla. Simmons could only look on in horror before Mechagodzilla swiped its claw straight through the Apex module, killing him instantly and putting an end to him.

At first, Walter seems like a well-spoken, charismatic, and compassionate man with a flare of bravado who seeks to better mankind and help the world become a safer place, although he expressly distrusts Godzilla and considers him a threat rather than a savior. In actuality, this facade veils an obscenely reckless, arrogant, egotistical, ruthless, and morally bankrupt man; who justifies his actions by claiming he is giving humanity a way to fight back against the Titans, but whose actions really amount to inflating his own ego by being the one to topple the Titans rather than actually making the world a better place for anyone besides himself. He has absolutely no issue for the millions of innocent civilians whom he callously and above all knowingly puts in Godzilla's warpath so he can make himself and his company falsely look like mankind's saviors; an act for which Simmons expresses no remorse at all when Madison Russell directly calls him out on it.

An embodiment of human hubris, Simmons believes that mankind can and will always triumph over all their adversities including the Titans via technological innovation and ambition such as that which characterizes his company, and he visibly enjoys playing God whenever his Mecha is about to be activated. He seems to be cognitively incapable of comprehending the mere notion that his plans might in any way go wrong until the moment he's staring death in the face; most glaringly shown by how he thought nothing of using the still-telepathic skull of Ghidorah as Mechagodzilla's brain, and by how he rushed through uploading the Hollow Earth energy to Mechagodzilla as soon as he obtained it without performing even basic testing first.

In addition to being a narcissist, Simmons shows signs of high-functioning sociopathy, which is especially shown in the novelization. He's able to feign empathy to manipulate others but seems to completely lack it; he has an inherent lack of impulse control when he obtains the Hollow Earth energy formula; he's superficially charming; he possesses an already-overinflated ego which he's driven to feed ever further, and he shows no signs of being fazed by his daughter's death if he's made aware of it before he goes the same way.

Despite all of this, Simmons seems to hold some slight honor towards Nathan's brother's death beforehand. He shows what looks like a small amount of sympathy towards him when Nathan brings it up, and Simmons even mentions that he was "a true pioneer". However, due to him being a passive-aggressive egomaniac who is willing to deceive anyone to help him with his endgame goal, and him briefly looking at a newspaper with David's info clipped off of it, it's more than likely that this was a manipulation tool to get Nathan to extract the Hollow Earth energy source to power-up Mechagodzilla, and/or Simmons simply respecting a noteworthy contributor to his warped perception of human pioneering; and it doesn't change that he committed horrific actions with entirely selfish motivations.

Simmons publicly expresses distrust of Godzilla, labeling him a threat to mankind rather than an ally. As Godzilla is the reigning King of the Monsters, Simmons evidently perceives Godzilla as his ultimate adversary or obstacle to be destroyed so that Simmons can sate his own sense of self-importance, and he takes glee in modeling the Mecha he intended to usurp and replace Godzilla within Godzilla's likeness.

Ishiro Serizawa's son and Walter's right-hand man. During Ren's time with Apex, Walter presented himself as a surrogate father figure to the young scientist and was greatly impressed with his talents in technology. The two work closely together on the Mechagodzilla project. They're frequently seen together or at least in the same Apex building, and they approach Dr. Nathan Lind together with their proposal that he helps them reach the Hollow Earth. Ren is something of a voice of reason to Simmons' overconfidence, openly contemplating the possibility that Maia, Lind, and Andrews will fail in their mission to deliver the Hollow Earth's energy formula to them, and also protesting when Simmons impulsively wants the energy formula uploaded to Mechagodzilla immediately without proper testing due to them having no idea how it could affect the Mecha or the Ghidorah skull. However, still Ren submits when Simmons angrily orders Ren to "get in the goddamn chair".

The novelization reveals that despite Walter's respect and seeming fondness for him, Ren actually is merely using Simmons to further his own agenda and sees Simmons as a mere stepping stone. Ren secretly views the petty egotist as a "chattering baboon" who is good at taking credit for others' inventions, and Ren is seriously considering disposing of Simmons the moment he no longer needs him. Simmons appears to be blissfully unaware of his right hand's true intentions, seeing as Ren would've been in the perfect position to seize control for himself when Mechagodzilla was empowered with the Hollow Earth energy, if not for Ghidorah hijacking the Mecha.

Maia is loyal to Walter, while Walter expresses high confidence in his daughter helping find the power source to power MechaGodzilla.

The novelization expands more on their relationship. Simmons is pleased when Maia succeeds in delivering the Hollow Earth formula to him. But it's also revealed that Simmons tends to set up mind games for Maia on her assignments to test her wits and see if she's worthy to inherit his corporate empire, such as keeping her in the dark about Kong's involvement in the mission to reach the Hollow Earth.

Walter sees them as nothing more than guinea pigs to show off MechaGodzilla’s power.

Mechagodzilla was the focus of all Simmons' pride and dreams, as an artificial Titan of his own making and under his control with which he could topple the Titans and reaffirm his own grandiose sense of self-worth. 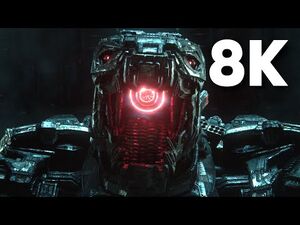 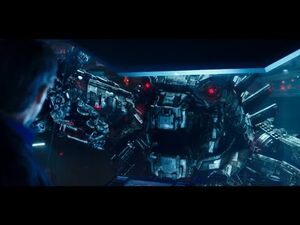