Provide for his family by leaving behind a large sum of money when he dies from cancer (initially but succeeded in the end).

Avoid incarceration.
Establish his own drug empire.
Cook meth for his own satisfaction (all succeeded).
Kill Jesse Pickman to protect his family (abandoned).
Kill Jack and his gang to avenge Hank and free Jesse (succeeded).

Walter Hartwell White, Sr., also known by his alias Heisenberg, is the main protagonist of the television series Breaking Bad. He also appears in a flashback scene in El Camino: A Breaking Bad Movie. A brilliant but underachieving chemist working as a high school science teacher, Walt is diagnosed with terminal lung cancer, which spurs him on to use his chemistry knowledge to cook and sell crystal meth to provide for his family after his imminent death.

As the series progresses and he becomes more involved in the drug world, the formerly mild-mannered and unassuming teacher slowly changes and transforms into an increasingly sinister, dangerous and ruthless criminal driven more by ego and greed than his stated altruistic motives, this way becoming the main villain of the series.

He was portrayed by Bryan Cranston, who is previously best known for his role as Hal Wilkerson in Malcolm in the Middle. Cranston won four Emmy Awards for Outstanding Lead Actor in a Drama Series, tying him with Dennis Franz for the record in this category.

An extremely complex character, the entire story of Breaking Bad shows Walter White's transformation from well-meaning and sympathetic anti-hero to a ruthless and loathsome villain of his own story. It also charts his constantly shifting personality and motivations as they become darker and more selfish as the series goes on. His turn to villainy and the gradual reveal of the darkness that was within him all along over the course of the series has led him to be commonly compared by critics to a number of Shakespeare villains, most prominently Macbeth.

In the beginning, after being diagnosed with lung cancer, Walter's stated motivation was to make enough money to leave behind for his family. While this was true to some degree, holes could be seen in this motivation as early as the first season, where he turns down the seven-figure job from his former business partners out of pride. While the money he could leave behind continued to be an important driving point for him for the rest of the story, he gradually reveals that he sincerely enjoys the thrills and feelings of power that being a criminal brings, and he has such great pride in his near perfect blue meth. He mentions early on in the series that he never felt like he had any say in his life, and so his work as a drug dealer is the first time he's had control. He also feels that he is making up for his rash decision to leave his former business partners for a $5,000 buyout, abandoning a company that is now worth billions of dollars, creating a meth empire to give himself a similar feeling. He reveals to Skyler in the end that everything was done for himself, as it made him feel alive.

Walter was an extremely prideful and arrogant man, to the point of being a narcissist. Nearly everything he does is driven by his massive ego, leading a very smart man in making very stupid decisions. This ranges from turning down the aforementioned job offer to cluing his brother-in-law, Hank, in that his primary suspect for being Heisenberg, was most likely not the real Heisenberg, not wanting anyone else to take credit for his work, even at the risk of being captured later. As a result of his ego, Walter takes criticism extremely poorly; this is best shown when Mike calls him out for turning on and killing Gus Fring because he thought he could run his business just as well but turned out to be wrong. While he was absolutely right, Walter became so angry that he shot and killed Mike in an ego-driven rage. His very partial redemption at the end comes from letting go of his pride to a degree, though it was still his pride that drove him to make his final moves when he saw his former business partners discrediting him.

As the series moved forward, Walter became more ruthless. The man who sobbed as he strangled Krazy 8 in self-defense was eventually able to poison a young child without remorse in order to begin his final plans against Gus-even brushing off Drew Sharp's death as he whistled at work after his disappearance was announced on the news. The decay of his morality was noticed by both Skyler and Jesse, making Skyler terrified of him despite helping him before, and disturbing Jesse into wanting to leave the meth trade altogether.

Despite his ruthlessness, Walter still deeply cared about his family, growing angry at the idea of Saul's suggestion to kill Hank after he realized who Walter was. In the pilot episode, he even assaulted a jock for making fun of his son's cerebral palsy. Before Jack killed Hank, Walter begged and bargained for Hank's life and was utterly broken when Jack fired the shot. Getting revenge on Jack became one of his driving motivations in the final episode of the series. He was also greatly against the idea of killing Jesse until it seemed necessary to him, and at the end took a bullet to save Jesse's life. This did not stop him from being emotionally abusive and manipulative towards them. His relationship with Jesse, in particular, was as an abusive father-figure who kept Jesse loyal to him through manipulation and blackmail.

As much as he loved his family, it is made clear that he loves one thing more. While dying, he strolls through the meth lab, examining the equipment lovingly, signifying that his one true love was his precious blue meth, the empire he built. 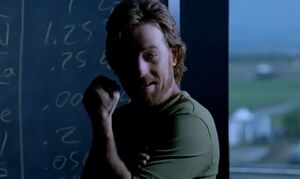 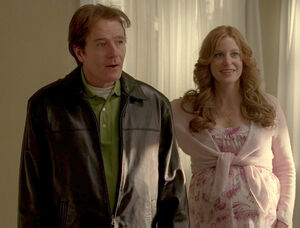 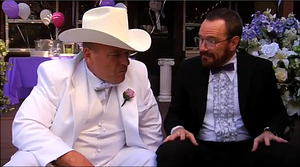 Walt with Hank prior to his and Marie's wedding in 1998. 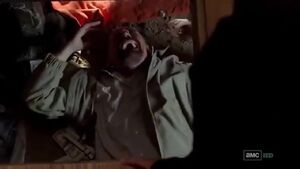 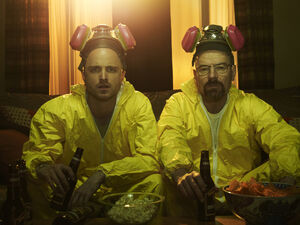 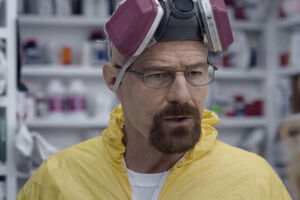 Walt guest stars in a Super Bowl commercial for Esurance.
Add a photo to this gallery 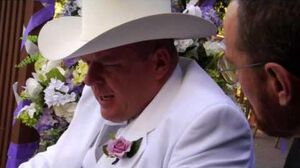 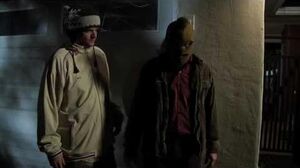 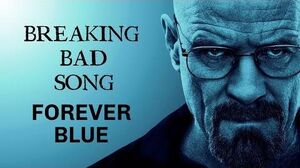 Retrieved from "https://villains.fandom.com/wiki/Walter_White?oldid=3754908"
Community content is available under CC-BY-SA unless otherwise noted.