Perverted Blackmailer
Walter Williams is an Elusive Tagret in HITMAN (2016) and HITMAN 2 (2018), being the main antagonist in The Blackmailer mission.

He is an up-and-coming fashion model who is blackmailing his ex-girlfriend. He was later found and killed by Agent 47 during Sanguine fashion show in a contract assassination.

Walter Williams was an up-and-coming supermodel hired by Viktor Novikov. He combined a dangerous charisma with exceptional good looks, and he had a record of infamy through financially ruining his former lovers.

Williams' particular modus operandi was to target and seduce wealthy businesswomen and then obtain highly compromising material on them. He then leverages this to sustain a highly comfortable lifestyle until he either tires or the money runs out. 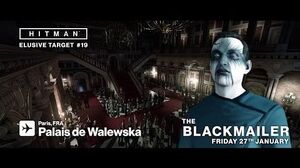 HITMAN Elusive Target 19 The Blackmailer
In-game briefing.
Add a photo to this gallery

Retrieved from "https://villains.fandom.com/wiki/Walter_Williams?oldid=3935608"
Community content is available under CC-BY-SA unless otherwise noted.