Scientist, Secretary of Defense, Commander of Fringe Division in the other universe and founder of Bishop Dynamic

Believing that nature sees only balance and imbalance instead of good and evil.

Save his universe destroying another universe.

But he is more ruthless and cruel than Walter Bishop, he thinks that end justify the means so he belief if he destroy our universe he would save his universe.

He was portrayed by John Noble, who also played Unicron in Transformers: Prime, Henry Parrish in Sleepy Hollow, Brainiac in Superman: Unbound, Scarecrow in Batman: Arkham Knight and Mallus in DC's Legends of Tomorrow.

Walternate had a similar history to Walter through 1985, having married the same Elizabeth and having their own child Peter. There are variations in their history as well, in part due to the William Bell of the alternate universe dying in a car accident as a child and thus never befriending Walternate. Walternate was appointed as the United States "national security czar", and saw that the Strategic Defense Initiative or Star Wars to its success. Walternate is also shown to have started a company called "Bishop Dynamic" (a parallel to Massive Dynamic, the company founded by William Bell in the prime universe).

In 1985, Walternate had worked on a cure for his son Peter, but was distracted by the Observer before seeing the successful result of the test. When Peter was kidnapped by Walter, Walternate slipped into depression and alcoholism, his job at risk, unable to explain how Peter was taken. After receiving moral support from Elizabeth, he returned to work, and later is surprised when young Olivia appears to him when she crosses over from the prime universe. Receiving her sketchbook, Walternate discovers that Peter is in the prime universe and resolves to get him back.

In 1995, he wrote and published ZFT-The Natural Decay of Our World. He admits to his current Fringe Division team in Manhattan that the book is a half-truth and that the tears are not natural decay but lead to something on the other side.

In the present days Walternate has become the U.S. Secretary of Defense, overseeing a more militant Fringe Division from his base on Liberty Island, though he has since separated from Elizabeth. He is also good friends with the second-in command of the Fringe Division, Colonel Phillip Broyles. He identified means of stopping the singularities caused by Walter's crossing in 1985 by using an amber-like substance to seal the area around these, regardless of the innocent lives trapped. He has also engineered the Shape-shifters, lead by Thomas Jerome Newton, to cross to the primary universe and perform actions that ultimately allow him to cross over and convince Peter to return to the parallel universe. He shows Peter The Vacuum that they have found and reconstructed, and urges Peter to figure out how it works as the device only reacts his biological signature. The purpose of the machine is later revealed during scene at a pub; the observer strolls by leaving behind a drawing depicting Peter being responsible for the apocalypse through the doomsday device.

When the primary universe Olivia and Walter arrive to rescue Peter, Walternate arranges for Olivia's doppleganger, Olivialternate, to pretend she is Olivia and return with Walter and Peter. Having captured the original Olivia, Walternate subjects her to memory implantation to make he believe she is Fauxlivia while trying to recreate the Cortexiphan drug and understand its properties, intending to execute her once his goals are reached. Meanwhile, Walternate has engaged Fauxlivia to help the prime universe discover the Vacuum, eventually recovering one part that was missing in his construction. When it comes time for Fauxlivia to be extracted from the primary universe, Walternate arranges for Olivia to be executed and her brain removed, with her body being used for the exchange of mass needed for Fauxlivia to return. However, a sympathetic Colonel Broyles helps Olivia escape, and is killed by Walternate's mercenaries in the effort, causing Walter to use his friend's body for the mass-exchange, but has it mutilated first so that it would have the same mass as Fauxlivia.

When Fauxlivia returns and finds out she is pregnant with Peter's child, Walternate 'offers' to help in any way he can, believing the child will be an alternative way of activating the Vacuum through acquiring Peter's genes, going as far as to organize an anonymous kidnapping of Fauxlivia and accelerating her pregnancy to ensure the baby's survival. By now it is revealed that the vengeful, relentless Walternate's only previous interest in Peter was his unique biological blueprint needed to activate the machine. Believing that now that Peter has chosen his side, he doesn't hesitate to proceed to activate the machine with the intent of destroying the prime universe and his son along with it.

However, the machine does not work as expected: while it accelerates the deterioration of the primary universe, it does not begin to heal the alternate one. After Peter activates the primary universe version of the machine in an attempt to combat the decay, Walternate discovers he cannot shut down his version of it, and attempts to have Fauxlivia do it, believing that she might be able to access the same telekinetic powers as her counterpart. However, Peter uses the primary universe machine to create a "bridge" between both worlds, so that both can work together to heal their prospective universes, an alliance which Walternate grudgingly agrees to.

In the alternate timeline, Peter was still taken as a child but died when he was taken to the prime universe. None the less, Walternate appears to be a lot less ruthless and cruel than he is in the original timeline. When Peter travels to see him, Walternate instantly recognizes him (even though he had never seen him grown up) and agrees to help him travel back home. 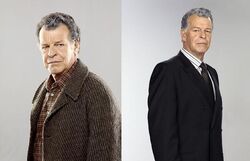 Walter Bishop and his alternate reality counterpart, Walternate.
Add a photo to this gallery

Retrieved from "https://villains.fandom.com/wiki/Walternate?oldid=3300750"
Community content is available under CC-BY-SA unless otherwise noted.