Unknown. Only stated to have been built 1,000 years ago after Quincy's defeat of Quincy-Shinigami War

Members possess all fundamental powers as had Quincies of the old, then enhanced them

Revived Villains, Evil from the Past, Seeker of Vengeance

The Wandenreich (見えざる帝国 (ヴァンデンライヒ),Vandenraihi; Japanese for "Invisible Empire") is a hidden empire of the Quincy and the main antagonists in Quincy Blood War of Bleach. They are at war with Soul Society. They are lead by Yhwach.

After losing the war with the Shinigami 1,000 years ago, the Quincy escaped from the Human World into the Seireitei, the place they figured to be the most unguarded. In doing so they used Reishi to create space in the "shadows". This is what was called the Wandenreich, "The Invisible Empire". Their plan was to use the abundant Reishi that was only to be found inSoul Society as the source of their power. So they waited and hid for 1,000 years and gathered their power.[3]

Sometime after the defeat of Sōsuke Aizen, the Wandenreich conquered Hueco Mundo, capturing Tier Harribelin the process.[4] In addition, they conscripted numerous Arrancar into their service and killed many Hollows.[5][6][1]

The organizational structure of the Wandenreich is not yet clear, but there is a central monarch based out of their headquarters.[7] In his service, there are a number of underlings who follow his direct orders. His successor to the entire monarchy is Uryū Ishida.[8]

A group of elite Quincy combatants known as the Sternritter (星十字騎士団 (シュテルンリッター), shuterunrittā; German for "Star Knights", Japanese for "Star Cross Knight Band/Order").[9] Members of the Sternritter and certain other individuals (including Yhwach) within the Wandenreich military are each assigned a letter of the alphabet and an appropriate epithet by Yhwach in order to designate them.[10] Upon having their former master betrays them after absorbing most of their powers, Bazz-B, along with most of Sternritter members plans to coup d'etat and assist the Soul Reapers against their former master.

There is a separate hunting unit called the Jagdarmee (狩猟部隊 (ヤークトアルメー), yākutoarumē; German for "Hunt(ing) Army", Japanese for "Hunting Corps") of Hueco Mundo which, in the wake of Hueco Mundo's conquest by the Wandenreich, is entrusted with capturing Arrancar to serve the empire.[11]

The Jagdarmee is separated into numbered groups, and the leader of the first Jagdarmee, the Executive Hunting Captain (統括狩猟隊長, tōkatsu shuryō taichō), is Quilge Opie.[12]

The military is comprised of a large number of skilled Soldat (聖兵 (ゾルダート), zorudāto; German for "Soldier", Japanese for "Holy Soldier(s)"). They can defeat low-ranked Shinigami with ease.[13]

The Wandenreich have forcefully drafted many strong Arrancar into their army,[11] who are considered to be useful soldiers due to them not requiring prerequisite training, but are regarded as expendable, for Yhwach killed two of them once he deemed they had fulfilled their purposes, and claimed that, having annexed Hueco Mundo, he can obtain as many Arrancar as he wishes.[7] There exists a communication unit, which maintains the connection between headquarters and operational units.[9]

The Wandenreich is based out of a large, ice-encrusted building known as Silbern (銀架城 (ジルバーン), Jirubān; German for "Silver", Japanese for "Silver-Wrought Castle"; Viz "Silver Cross Fortress").[14] This building consists of a thick base with a long stairway leading up the front. On top of this are a series of thick columns supporting a thicker second tier of the building. There is a third tier above this, supported by thinner columns. Surrounding the main building are a number of ice-covered round or square towers and two curved structures leaning towards each other, forming an arch-like monument at the front of the building.[15] Inside the building, Yhwach has a floating throne. Behind this lies a series of floating steps leading to a curtained doorway, where Harribel is kept prisoner.[4] Housed somewhere in the place where the Wandenreich reside is a structure called the Gate of the Sun (太陽の門, Taiyō no Mon), which was used to invade Soul Society.[16]

The typical attire of most Wandenreich personnel consists of a long, white, double-breasted trench coat with shoulder straps and a white, button-down bib. This coat is bound at the waist with a black belt, which is further adorned with a decorative buckle, and is worn over both white trousers and trench boots. Many members sport white hats with black peaks and a crest emblazoned on its front, which is reminiscent of the five-pointed variant of the Quincy cross. This insignia is reflected by the buttons of their other apparel.[22] Some higher-ranking members pair this uniform with other additional pieces of clothing, such as capes or cloaks, to distinguish themselves.[23] The Sternritter wear a distinctive white, ankle-length cloak over their uniform which features the Wandenreich insignia emblazoned on its back and often a hood attached to the cloak's collar.[24] Apart from the standard uniform, a Soldat's attire consists of a military beret, black goggles with white lenses, a gas mask which obscures their entire face, and a short, collared cloak.[13]

In certain instances, personnel have been observed wearing a simplified version of the usual Wandenreich uniform, which lacks the normal button-down bib and belt.[25] Those who took part in the declaration of war upon Soul Society sported this specific variation, as well as a hooded cape, which featured a black mask in order to obscure their face, and a black band diagonally encircling their body.[26]

Medallion (メダリオン, Medarion): A number of those within the Wandenreich military, including all members of the Sternritter, carry on their person a round device which is roughly the size of a person's palm and has the Wandenreich insignia etched into its surface. When activated, this device can steal a single currently released Bankai in the immediate vicinity.[27] Once stolen, the medallion's wielder can use the stolen Bankai's power at will, even after the original owner's death.[28][29] They appear unable to exploit this power fully, for according to what Yamamoto experienced, Driscoll Berci's use of Kōkō Gonryō Rikyū was noticeably inferior to that of its true owner, Chōjirō Sasakibe.[30]

In their war with Soul Society, the Wandenreich have placed particular emphasis on five so-called Special War Powers (特記戦力, tokki senryoku; lit "Notable/Noted Fighting Powers"), who they believe will play a pivotal role in deciding the ultimate outcome of the war itself.[16] These powers are important enough that the temporary detainment of just one prompted the Wandenreich to begin the invasion of Soul Society, due to their guaranteed absence.[9] Sōsuke Aizen was asked to join the Wandenreich as one of the special war powers, but he turned down the offer.[36] Captain-Commander Genryūsai Shigekuni Yamamoto was not considered to be a special war power because Yhwach considered him weak compared to 1000 years ago.[37] Originally, Kenpachi Zaraki was listed as first among the group's members,[38] but after Kenpachi's defeat at the hands of Royd Lloyd, Ichigo Kurosaki was deemed the most dangerous member of the Special War Powers.

Those known to be classified as the "Special War Powers" are:

Quilge Opie
Add a photo to this gallery

Emperor of the Wandenreich – Yhwach

A=Almighty Yhwach has been the Wandenreich leader for over 1000 years. He holds a grudge against Yamamoto for annihilating the Qunicies the first time they fought.

Successor to the Empire – Uryū Ishida

Grandmaster of the Sternritter and Advisor to the Emperor – Jugram Haschwalth

B=Balance Haschwald is put in charge of the Stern Ritter and is Yhwach's right hand.

J=Jail Quilge Opie leads the Jagdarmee as they conquer Hueco Mundo. He goes up against Ichigo Kurosaki and his friends, as well as a few Arrancar, before being killed by Grimmjow. He can absorb energy and create prisons. 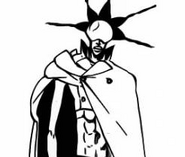 Giselle, Liltotto, Meninas and Candice
Add a photo to this gallery

A hooded Quincy with an inaudible voice who can bring down opponents by muttering. Is actually the left arm of the Spirit King.

Bambietta steals Komamura's Bankai in her first appearance. She's the unofficial leader of a small group of female Sternritter. Her signature power is the ability to make objects explode just by touching them with her spirit energy. Komamura defeats her later on.

Äs Nödt fights Byakuya Kuchiki, successfully stealing his Bankai and almost killing him with it. He can use fear as a weapon. He is incinerated by Yamamoto, but appears alive and well later on as Bazz-B protected him with his own flames. He's later defeated by Rukia Kuchiki.

One of Bambietta's minions. Has a sweet face and a foul mouth. She can stretch out her mouth to swallow her foes.

A hot-headed Qunicy who strongly opposes Yhwach's decision to give Uryu command of the Wandenreich. He can create fire.

A Quincy that uses martial arts and an iron claw. He stole Toshiro Hitsugaya's Bankai but lost it to its rightful owner before he could use it against him. He was killed immediately afterward by Haschwalth for losing his stolen Bankai. Cang Du's power is to cover his skin in a layer of iron which protects him from physical attacks.

A robot-like Quincy that uses various hidden weapons such as cannons, lasers and explosives. He stole Soi Fon's Bankai but lost it to its rightful owner before he could use it against her. He was then shot point-blank and executed by Haschwalth for losing his stolen Bankai.

A Quincy who resembles a fantasy warrior.

Driscoll was one of the Wandenreich ambassadors. He stole Chojiro Sasakibe's Bankai and killed him with a giant spirit-javelin. Yamamoto killed him.

One of Bambietta's minions. Has a timid personality. She can enhance her strength multiple times.

Q=Question Fought Kenpachi Zaraki, only to be killed.

Went up against Kenpachi Zaraki and was killed. He can turn into a giant gorilla, similar to Resurreccion.

A luchador-themed Quincy. He can heal injuries and increase his strength just by listening to the cheering of his assistant James. He's killed by Renji Abarai

One of Bambietta's minions. A hothead. She can use electricity-based attacks.

One of the Sternritter who attacked Seireitei in the first invasion, was confronted by Rose before getting incinerated by Yamamoto, but appears alive and well later on as Bazz-B protected him with his own flames. In the second invasion he is defeated by Byakuya Kuchiki off-panel before attacking Sōsuke Aizen with his ability before being shot to death by his comrade Bazz-B.

A creepy old man who can read thoughts and ease his prescence. Was killed by his comrade Gremmy Thoumeaux, who revealed he was just a figment of his imagination.

A cheerful boy who can alter reality with his imagination. He accidentally killed himself by trying to be stronger than Kenpachi. His true form is a brain in a jar.

A Quincy with two tongues who can alter an enemy's movements through air currents. He's quickly killed by Senjumaru.

One of Bambietta's minions. Has a bubbly personality. She can enslave anyone stained by her blood.

Asguiaro Ebern
Add a photo to this gallery

The Wandenreich ambassador. After declaring war on Soul Society, he is killed by Yhwach, as his role had been fulfilled.

Ebern was sent to lead a hollow attack on the Living World. He runs into Ichigo Kurosaki and tries to steal his Bankai, only to find out it can't be stolen. He retreats and is killed by Yhwach.

Wandenreich at the Bleach wiki

Retrieved from "https://villains.fandom.com/wiki/Wandenreich?oldid=3412510"
Community content is available under CC-BY-SA unless otherwise noted.