Next high-tech weapon for Chaank Industries

Sensing the fear of its prey.

Aid its creator Jack Dante in achieving his revenge on Hayden Cale.

Aid Jack Dante in killing everyone that worked for Chaank Industries.

The War Beast is the code name of a mechanical beast-like machine created by Jack Dante to do his bidding. It is the main antagonist of the 1994 British-Japanese sci-fi/horror movie Death Machine.

An autonomous killing machine, War Beast has no distinct personality beside being feral and relentless not unlike most savage of great white shark (one of its victims even described to be mangled by such despite its killing ground being obviously a maze-like multiple stories-tall building and the presence of synthetic lubricant instead of shark saliva gave away the true nature of the killer) as per its programming. The same programming even conditioned it to be more persistent the greater its victims' fear. Because Jack Dante was too insane to even consider in ensuring it could differentiate between him and its targets which ultimately led to his undoing, War Beast is basically a malicious and out-of-control mechanical monstrosity.

War Machine was designed to be a hunched, vaguely semi-humanoid robot with a domed head possessing maw full of sharp teeth, hands with razor-sharp claws, and exposed wiring and pistons which indicated it to be the first and (fortunately for the protagonists) last of its kind. True to its purpose as the next product in high-tech warfare for Chaank Industries's military contractors, the robot is made of damage-resistant alloy that allowed it to shrug heavy weaponry with little damage and impressive combat abilities. Lacking long-range weaponry, War Beast instead utilizes its talons and teeth to engage foes in close combat. Its terrifying appearance along with occasional erratic movement was deliberate in Jack Dante's part in order to inflict psychological effect upon foes as well as allowing it to use its infrared sensors that can locate and track down foes through their fear at its fullest.

The War Beast, under the code name "Frontline Morale Destroyer", was originally created in secret by Jack Dante. It was his last project and greatest masterpiece.

It was intended to be the next product in high-tech warfare, to be sold by the Chaank Industries to their military contractors.

But Mr. Dante himself, has other plans for his merciless machine. If should anyone crosses him, his beloved cybernetic monster will make them writhe in fear.

Recently, in the near future of 2003, Dante unleashes the cyborg and began his killing spree after he was fired by Hayden Cale, Chaank's new chief executive.

In the end, when Hayden Cale got away as the only survivor of Chaank's brutal massacre at Dante's hands, she sealed him away along with the War Beast before it began killing its own creator.

Neither Jack Dante nor his deadly creation were seen from again.

War Beast is programmed to hunt its prey through fear. 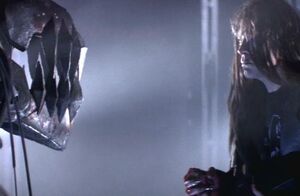 Jack Dante after his plan of revenge failed, was left alone with his favorite creation War Beast before he later died in the end. 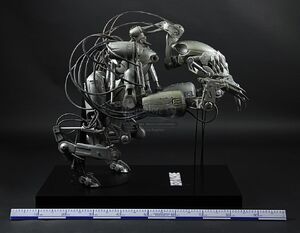 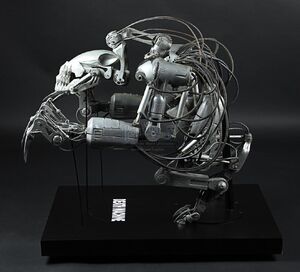 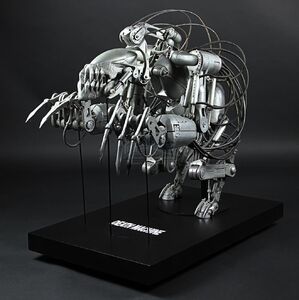 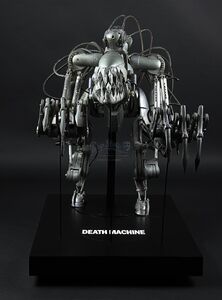 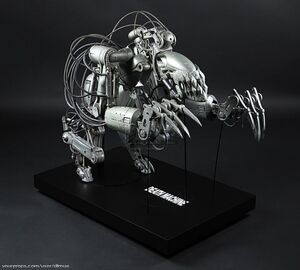 Add a photo to this gallery
Retrieved from "https://villains.fandom.com/wiki/War_Beast?oldid=4376896"
Community content is available under CC-BY-SA unless otherwise noted.