Abusing his men, Torturing his enemies

War Marshal "Mad Dog" Kazan was the main antagonist during the Judge Dredd storyline The Apocalypse War. He is a bloodthirsty and power hungry War Marshal of East-Meg One who led the attack on Mega-City One.

The Diktatorat have for years been planning for an attack on Mega-City One, knowing it will cause millions of deaths in their own city. After Orlok the Assassin contaminated Mega-City One's water supply which caused the city to go into a city-wide block war, softening it up for attack, Kazan proceeds to launch an suprise attack all over Mega-City One on all sides, nuking entire sectors and killing 150 million people. Kazan proceeds to assassinate the Diktatorat  and declares himself Supreme Judge of East-Meg One to claim sole credit for victory in the war and to increase his power. After a Commando unit led by Judge Dredd take East-Meg missile silo and use it to destroy East-Meg One, killing 500 million people, Kazan still refuses to surrender and executes an general for even suggesting it. He captures Dredd and his Commando unit and proceeds to torture them, stating how he will torture them for the rest of their natural lives. After Dredd and his unit is rescued by Kazan's second in command, the war weary Izaaks co-operate with Dredd and proceeds to capture Kazan, who before being executed by Dredd states he regrets nothing.

He is a bloodthirsty and power-hungry maniac who was one of the men who started an war which caused the deaths of over 900 million people and caused half of Mega-City One and his home city East-Meg One to be destroyed. He's shown to treat his men under his command horribly, sending men who fail him to Siberia without winter clothing for failing him, makes his second in command play a daily game of Russian Roulette for letting Dredd escape and executes an general for merely suggesting surrender. After the destruction of East-Meg One, he was merely angry that his city was destroyed. He also feels no remorse for his crimes, stating before his execution, "I regret nothing, I apologies for nothing!". 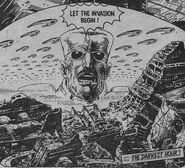 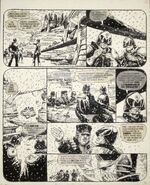 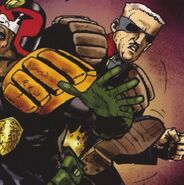 Add a photo to this gallery
Retrieved from "https://villains.fandom.com/wiki/War_Marshal_%22Mad_Dog%22_Kazan?oldid=3374854"
Community content is available under CC-BY-SA unless otherwise noted.