Commander of the African Militia

Help Makarov and Volk in their plans (succeeded).

Aid Makarov in his plans and smuggle weapons to him and the Ultranationalists in Europe.
Exterminate the rival ethnic group to the African Militia (both failed).

Waraabe is a supporting antagonist in the 2011 video game Call of Duty: Modern Warfare 3. He is the brutal leader of the African Militia in Somalia, terrorizing the local populace with an iron fist. He is an ally to the Inner Circle by helping the faction smuggle caches of nerve gas into Europe.

He was voiced by Hakeem Kae-Kazim, who also played Georges Rutaganda in Hotel Rwanda, Richard Gladwell in Gotham, Krogan and Drago Bludvist in Dragon: Race to the Edge and Benatu Eshu in Vixen.

Prior to the outbreak of World War III, Waraabe was already a wanted man and was declared an international criminal by INTERPOL. He was wanted on acts of commercial piracy, drug smuggling, human trafficking, arms smuggling, criminal homicide, various acts of terrorism and other crimes. He was a successful commander of the Somali military and was a high-ranking member and leader of the African Militia having influence spread from Somalia, to Sierra Leone and possibly even other parts of Africa. As leader of the African Militia in Somalia, Waraabe had taken over parts of the country and took part in the genocidal conflict in the region targeting unknown rival ethnic groups.

Following the outbreak of World War III, Waraabe was contacted by the Ultranationalists and made an alliance with one of their leaders, Vladimir Makarov of the renegade Inner Circle faction. He became affiliated with Fregata Industries and helped smuggle conventional and chemical weapons to the Ultranationalist forces in Europe both Inner Circle insurgents and Russian Military personnel. His aid to the Russians ended up causing a series of chemical weapons attacks across Europe which left the continent defenseless and was later besieged and momentarily overrun and conquered by the Russian Military which poured into Western Europe and made it as far as the French capital of Paris itself. Following the attack, an investigation was done and Waraabe was found out to have ties to Makarov and helped supply him and the other Ultranationalists with the chemical weapons that left Western Europe open and exposed to the Russian invasion.

After Waraabe was discovered, his compound in Somalia was located and the disavowed Task Force 141 along with the surviving Russian Loyalists launched an attack on the compound and raided the facility. Waraabe hid out in the palace nearby while the rest of his troops and the African Militia engaged the Loyalist-141 forces but to no avail. Eventually his quarters was found and raided where he was left injured and surrounded by John "Soap" MacTavish, Captain John Price, and Yuri who put gas masks on while Waraabe was threatened into revealing who he sent the weapons to under threat of dying from the same deadly chemicals used in the attacks. He quickly cracked and revealed that his contact was Volk and he was hiding out in Paris. He was given a gas mask, but Price shot him seconds later as revenge for his involvement in the Hereford chemical attack. 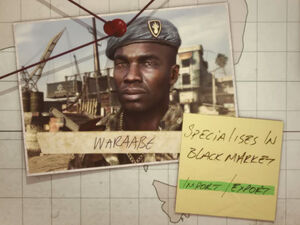 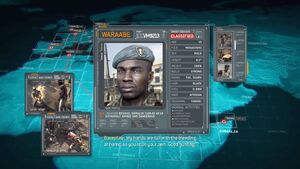 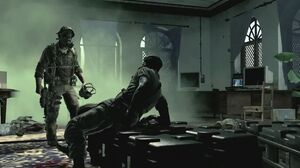 Warrabe being interrogated by Captain Price. 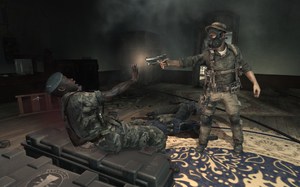 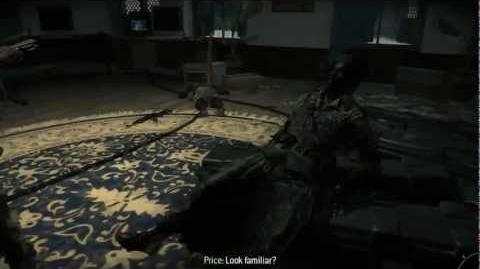