He was portrayed by Brian Cox, who also played Hannibal Lecter in Mindhunter, William Stryker in X2, Lionel Starkweather in Manhunt, Agamemnon in Troy, Scolar Visari in Killzone and Pariah Dark in Danny Phantom: Reign Storm.

Following the news of a failed assassination attempt on the African dictator Nykwana Wombosi, Abbott confronts Alexander Conklin about Treadstone and his involvement for the first time. In order to maintain plausible deniability, Abbott had refrained from speaking on the subject since there had never been any mistakes. Conklin assures his superior that it will be taken care of and any evidence connecting them to the assassination attempt will be eliminated, along with its operative Jason Bourne. As Conklin fails again and again to apprehend Bourne, Abbott loses faith in his abilities and acts on his own. He has Treadstone operative Manheim kill Conklin, and shuts down the operation. Meeting before the Oversight Committee, he tells them them that Operation Treadstone was an advanced game program, a theoretical-exercise that had been terminated due to its high cost. He proceeds to introduce Operation Blackbriar, led by Noah Vosen which plays a significant part in The Bourne Ultimatum.

In The Bourne Supremacy, Abbott is forced to help fellow CIA Deputy Director Pamela Landy track down Bourne once again, this time to learn of the CIA operative who stole $20 million. The name of the operative was in the Neski Files, which Landy and her team were attempting to buy off of a source before they were assassinated by Kirill, who would plant evidence to incriminate Bourne. Landy suspects Conklin and Bourne had something to do with the stolen money. Unbeknownst to Landy and everyone else, Abbott is actually responsible and in league with Kirill and Yuri Gretkov, a Russian businessman and Kirill's employer.

Abbott later accompanies Landy to Berlin, after retrieving former Treadstone handler Nicky Parsons in Amsterdam. He is adamant about killing Bourne on sight, where Landy hopes to bring him in. Because of Parsons, Bourne learns that Abbott was the head of Treadstone rather than Conklin. Meanwhile, Danny Zorn shows Abbott evidence that Bourne was framed and as result is murdered by Abbott.

After visiting the hotel room where he assassinated the Neskis, Bourne recalls the details of the mission. He tracks down Abbott and records an incriminating conversation between the director and Gretkov before revealing himself. Caught, Abbott admits to issuing the assassination attempt in Goa that resulted in the death of Marie Kreutz (Bourne's girlfriend) as well as the plan to frame Bourne. Bourne spares his life and leaves Abbott with his gun, later mailing the confession and Neski files to Landy. Not long after his departure Landy arrives, having learned of Zorn's mysterious death, Abbott takes Bourne's handgun and pulls the trigger to himself, committing suicide in front of a horrified Landy.

Abbott is mentioned by the new CIA Director, Ezra Kramer, of the last few events leading to his unexpected death.

Abbott in The Bourne Identity 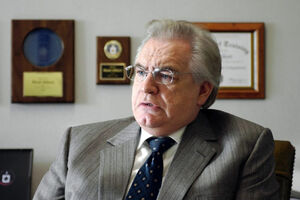 Abbott before being encountered by Bourne, following his suicide