Teach his son that prison is a serious place (failed)

Warden's Father is a minor yet important antagonist in the American adult animated comedy series Superjail!. He appeared only in three episodes where he was seen only through flashbacks and a photo.

He was voiced by Chris McCulloch.

There is very little known about The Warden's father. What is known, however, is that he was a short-tempered, cold-hearted and greedy divorcee and parent. He was incredibly abusive to his son to the point that he yelled at him when the latter tried to talk to him, used him as an executioner then spanking him afterwards and forced him to behead a puppy he had just fed a cookie to because he deemed the dog to be unfit for a future guard dog since it had shown love. He also desired to teach his son that prison was a serious place but he failed at this as he slipped on his son's toys, resulting in Warden's father accidentally hanging himself on a noose.

This resulted in his son becoming the world's youngest warden and being taken away by social services. Due to the fact that Warden's father yelled at his son for presenting his vision for a jail of his own which would later become reality, it is very likely that the late parental figure would be seriously disappointed in what his son has done if he were alive.

The abuse he suffered during his youth in his father's hands and his father's death as well as being taken away by social services may offer some explanation for the Warden's behavior in his later life as it very likely caused the Warden to become psychologically scarred and thus become severely deranged and violent despite his ever-cheerful and optimistic demeanor. 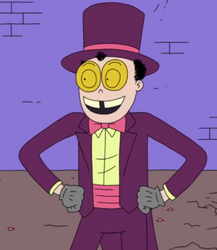 The Warden, AKA Mark Davis, Mr. Davis' son.
Add a photo to this gallery

Retrieved from "https://villains.fandom.com/wiki/Warden%27s_Father?oldid=4089536"
Community content is available under CC-BY-SA unless otherwise noted.