The Warden of the Sunshine Institute

Tormenting and abusing his prisoners and keeping them "well-behaved".

Prevent anyone (especially Xara) from escaping the Sunshine Institute (failed).

He is voiced by Donovan Patton.

The Warden was a griefer who was sent to the Sunshine Institute for making Romeo mad in an unknown situation. He entered the Sunshine Institute as part of the "second group" of the guests (prisoners/inmates), which make sure the "first group" were "well-behaved". However, he eventually rose to the top and became the Warden of the Institute, where he ruled over the Guests with an iron fist.

After Jesse is sent to the Sunshine Institute by Romeo and turned into a member of the "first" group of guests, he/she is chased by one of Romeo’s golems, named Big Hank. He or she tries to escape, but trips and meets the Warden, who says Big Hank was there to keep all guests "behave themselves". The Warden checks his list and sees Jesse's name there. He then "welcomes" Jesse into the Sunshine Institute, and later on, reveals it is a reformatory for people "the Admin" (Romeo) has found difficult. Then, he reveals he is the Warden of the Institute, and Romeo created it. The Warden then says Romeo is "an endless source of building brilliance".

As the Warden is walking along, Jesse asks about his or her friends and reveals Romeo put his gauntlet on one of them (either Petra or Jack, depending on who Jesse sent to destroy the Clock). The Warden says they must be Romeo’s favorite, and later on says that if they’re anything to Jesse, they'll go to the Sunshine Institute, too. The Warden then talks about another guest on his list (either Jack or Petra, depending on who did not destroy the Clock), who tells Jesse to distract the Warden. He/she does so, and Jack/Petra attacks the Warden. Jesse then attacks one of Romeo's golems who is behind him/her. The two attempt to escape the Sunshine Institute, but the Warden reveals it is too dangerous outside the Institute (despite the Institute being even more dangerous). He then tells the associates (the people of the higher level than guests, but a lower level than the Warden) to stop Jesse and Jack/Petra.

The two are eventually stopped by another golem working in the Sunshine Institute, who throws them down and stands with another golem. The Warden lies that the escape attempt was just rude. He orders one of the golems to take Jack/Petra to the "Mush Room" (a place where guests take mushrooms and make stew out of them), and the other golem to take Jesse to his office immediately.

In his office, the Warden commands Jesse to close the door, the latter of which can choose to follow or reject the order. Once Jesse made his decision, the Warden reveals his/her friends are in the Sunshine Institute, and Jesse sees that Radar and Nurm are being dragged away into the Mush Room. The Warden reveals there are two types of guests: the "first group", the guests who make Romeo extra-angry such as him/her and his/her "punch-happy" friend (either Jack or Petra depending on who did not destroy the Clock), and the "second group", the guests who make sure the first group of guests are "well-behaved". He then tells the golem with him to bring Radar into his office. Then, the Warden reveals he was actually part of the second group and was a griefer before that with another person.

Then, the two hear Radar's screams in the hall in the Sunshine Institute, and he comes out of the door, but is followed by the golem the Warden told to get Radar. Radar comes out, and is glad Jesse is okay. However, the Warden introduces his method of torture, the Iron Breathtaker, which has iron bars holding the victim in place and a sticky piston which shoves an iron block down over the victim’s head. The golem then puts Radar in the Iron Breathtaker. The Warden then tells Jesse he/she can work for him as an associate, and help bring “order” to the guests. However, Radar tells him/her not to join him, but the Warden immediately activates the Iron Breathtaker, and sadistically asks, “What's it gonna be?” At this moment, Jesse can choose to work for the Warden as an associate or refuse to join him and remain in the first group of guests. After Jesse made his/her choice, the Warden releases Radar from the Iron Breathtaker, either out of impression (if Jesse made the former choice) or disappointment (if Jesse made the latter choice), but never because he cares about Radar.

After this takes place, Stella, the leader of Champion City, walks into the room, and sees Jesse, having a brief conversation with him/her, then introducing him/her to the Warden as her rival. After that, she takes Radar with her. The Warden then gives Jesse a message that the more friends stick together, the harder they make each other's lives, a foreshadowing that the Warden is not what he seems. Jesse asks the Warden what he's hiding, and the Warden reveals not every prisoner wears orange in the Sunshine Institute. Then, Stella tells Jesse to come with her, and the Warden tells Jesse to go with her, into the Mush Room. As Jesse, Stella, and Radar walk into the Mush Room, the Warden tells Stella to be careful of what she wishes for, and the doors into his office close.

The Warden, at first, appears to be a calm, strict, and protective person, trying to maintain order in the Sunshine Institute. However, when he orders Jesse to shear Geoff, his true nature is revealed; he is, in fact, an evil, ruthless, and manipulative person who will do anything to achieve whatever he wants. He is a sadist who runs the Sunshine Institute without showing any loving or helpful traits, having the guests do hard work while hardly having any food. He also used his machine, the Iron Breathtaker, to torture Radar, Jesse's intern, by placing an iron block on his head so he can’t breathe.

In the Warden’s office, Jesse has the option to tell the Warden he's worse than "the Admin" (Romeo) if he/she refused to work for him. This is likely a true statement, as while Romeo has some redeeming qualities such as genuine remorse and protection, the Warden has almost none, and only "protects" his guests from outside the Sunshine Institute so he can continue abusing them in terrifying ways.

However, the Warden does have a sense of honor, as, before his death, he reveals he promised Romeo that he will prevent Xara from ever escaping the Sunshine Institute, even if he had to kill her, Jesse, and his or her group, and even himself in order to keep his promise. 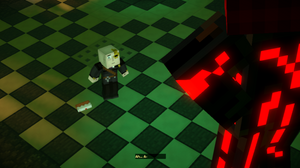 Romeo (right) having a serious conversation with the Warden.