Oversee the production and stability of Superjail, among various other goals.

The Warden is the villainous main protagonist of the Adult Swim series Superjail!.

The Warden demonstrates sadistic tendencies to the point of being described as a "sadistic Willy Wonka". On one supervision round with Jared, he shows utter delight at the various machines that slaughter and kills his prisoners (especially if they feature his face in some way). He's also incredibly egotistical as seen with the previous example of the weaponry bearing his facial features. Very frequently when things go awry, he will blame everyone (usually Jared) for the problems he caused.

He is mentally ill, as seen as early as the pilot episode where he pets a rabbit and kills it, only to be inspired to get bunny suits for the prisoners when he put the rabbit's carcass atop his head.

Going further in the same episode, when the Twins screwed up the prison bunny suit order so that half were bunnies and half werewolves, he relished the chaos that exploded between the prisoners dressed as either animal, which only worsened as the moon came up full and the wolf-suited prisoners became werewolves.

But other episodes demonstrate this as well, such as the time when a small cancer child (nicknamed "Sanser" by the inmates who cared for her) was accidentally taken with Jailbot. The Warden, who was going through a midlife crisis, wanted Sanser to be incinerated.

Things only got worse as the Warden developed a demonic form who wanted to kill Sanser but was mercifully stopped by Alice (Sanser died anyway of natural causes).

The Warden is a pale man of a slender build. He usually dresses in a purple tailcoat, with matching slacks and top hat. He wears a pink bow tie and can often be seen holding his cane. He also wears a pair of round yellow spectacles, of which he is never seen taking off. He has shown to have dark blue eyes in the rare instances he takes off his glasses.

In one episode, it was shown through one of Warden's drawings that his front tooth was yanked out by his father as a small child.

In one episode and the official music video for the intro theme song for the show, The Warden is depicted in real life as an obese, balding, dirty-looking man with a beard. He overall still wears the same clothes as he does as a cartoon character albeit with red shades instead of yellow shades.

One of the most defining traits of The Warden is his completely unexplained ability to shapeshift to anything he desires at will, from everything as small as a mosquito to a literal galaxy. 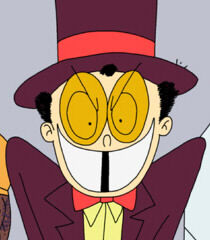 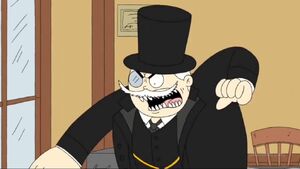 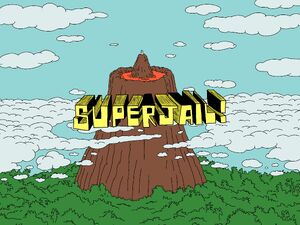 The Warden's Creation, a giant prison on a mountain inside of an even bigger volcano. 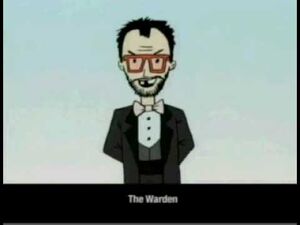 Early concept art of The Warden wearing a much less stylish suit, no hat, red glasses, and is also missing a tooth.