He at first arranges to have Frank Leone transferred to his prison after the latter escaped to visit his dying mentor, whom he had avenged by beating a gang who attacked him and got away with it, which is how he ended up in prison. Frank escaped on Drumgoole's watch and Drumgoole was humiliated but rose to power again and plotted his revenge.

As soon as Frank arrives, Drumgoole explains that he is angry for being "punished for Frank's crime". Over the course of Frank's imprisonment, he has his corrupt guards and inmates repeatedly torture Frank for an excuse to keep him in the prison longer, even to the point of forcing Frank to watch the inmates destroy a Mustang that Frank and his friends restored and putting him in solitary confinement for six weeks, and hiring one of Frank's enemies to kill his friend in order to bait Frank into killing him. He then has another guard pose as an inmate, telling Frank that he has been hired to rape Frank's girlfriend to cause him to try and escape, which would carry a mandatory ten year sentence but Frank does not fall for it. 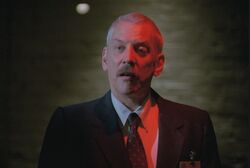 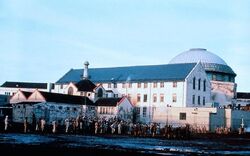 Add a photo to this gallery
Retrieved from "https://villains.fandom.com/wiki/Warden_Drumgoole?oldid=1701630"
Community content is available under CC-BY-SA unless otherwise noted.