Keeper of the Domain

The Warden Eternal is a general of the Created and the secondary antagonist of Halo 5: Guardians.

He is a Forerunner Promethean AI, designed initially to protect access to the galaxy-wide network known as The Domain. However, he was later taken control of by Cortana, who used him to initiate her plans to take over the galaxy. As a Promethean AI, he has the power to operate a set of identical robotic avatars. The number of these "bodies" is said by Cortana to be in the millions, and he has been seen controlling at least 20 at once during the Halo 5 mission The Breaking. He also has some command over other Promethean forces as well, however, Cortana ultimately has control over him as well as his bodies.

These bodies appear as 16 and a half foot tall humanoid-like figures consisting of floating geometric metallic pieces connected and highlighted by hardlight. Like all humanoid Promethean AIs, the Warden's bodies sport a skull-like face, however, the warden's is covered by a layer of metallic pieces that move to show expression, as opposed to the armored layers of the Knights and Soldiers. The Warden's hands also possess six fingers like the hands of some forerunners. On the back of the Warden Eternal's bodies are small slipspace bubbles which may serve as a power source or control point. These slipspace bubbles are a weak point on the Warden, and upon its destruction, the body will be pulled into this bubble. For armament, the Warden Eternal has a beam-like weapon built into his "face", and with it the ability to generate an orb-like projectile. He also possesses a segmented sword held together by hard light. The bodies weigh just over one and a half tons. The Warden's virtual avatar, when not in physical form, has the same appearance as these bodies.

The Warden Eternal exhibits a strong sense of duty, to whatever his cause may be, be that defending the domain or serving Cortana, almost to a fanatical extent in regards to the latter, making claims that seem to contradict known facts in support of Cortana's ambition, such as claiming the Forerunners always intended for Artificial Intelligence to claim their Mantle of Responsibility. However, despite his loyalty and dedication, he is more than willing to defy instruction if it means ensuring those goals succeed. This is most evident when he takes actions against the Master Chief and Blue Team against Cortana's wishes due to his perception of them as a major threat to her. Strangely, despite being firmly under Cortana's control, he has made some threatening remarks toward her. The Warden also seems to possess a disdain for humanity distinctly similar to that of The Didact's, as well as a supremacist attitude in regards to both Forerunners and AIs. However, like the Didact, Cortana claims the Warden has gained a considerable level of respect for Master Chief, as well as the other members of Blue Team over the course of their battles.

In combat, the Warden shows major frustration at being bested, often blaming the limitations of his bodies.

The Warden Eternal was placed to guard the Domain by the Forerunners sometime prior to the fall of the fall of their civilization. He seems to have known important Forerunner figures such as the Librarian and possibly the Didact. It is unknown how the Warden survived the initial destruction of the Domain after the Halo array fired, but he would remain there until the events of Halo 5.

After the events of Halo 4, in the story Domain Splinter, The Warden encounters a fragment of Cortana which seeks entrance into the Domain. The Warden denies her only to discover other fragments have already infiltrated the Domain. The fragments overwhelm the Warden and bring him under their control before they reform into a single Cortana.

Later during the events of Halo 5: Guardians Cortana would send the Warden to the planet Meridian to oversee the safe passage of Master Chief and Blue Team onboard the planet's Guardian to Genesis, the planet on which the Domain's gateway was located. On Meridian, the Warden encountered Fireteam Osiris in pursuit of Blue Team. He fails to stop their pursuit and is defeated, along with a number of Promethans he had enlisted to aid him.

Later on Genesis, when Guardians were arriving from their many worlds, some brought with them covenant terrorists who either followed them or were accidentally caught in their slipspace bubbles. The Warden deploys to eliminate the intruders before meeting with Blue Team.

At some point, before meeting Blue Team he learned a great deal about them from Cortana, including Master Chief John-117's "forgotten" family name. The information the Warden learned lead him to suspect them as a threat; He knew they would never agree with Cortana's goals and was concerned that John would attempt to destroy her. He was unaware however that she was already prepared for John and thus he decided to take matters into his own hands.

Upon meeting Blue Team he is initially not hostile, opting to question John about his intentions. The Warden, unsatisfied with John's answers almost immediately begins assaulting them with Promethans before using one of his own bodies to ambush them. He defeated, however, and afterward, Cortana contacts Blue Team to help deal with the rest of the defenses the Warden had set up.

Elsewhere, on the planet Sanghelios, Warden deploys again in response to Fireteam Osiris' attempts to locate Master Chief using a hijacked Guardian. He fails and once they are on Genesis, he moves to intercept them once again at the entrance to the Domain's Gateway. Losing to Osiris a third time he opts to assault them yet again, but this time with two of his bodies at once. This again fails, allowing Osiris to catch up with Blue Team.

Not long after, Cortana brings Blue Team further into the Gateway, causing the Warden to act without restraint. In the mission called The Breaking, he ambushes Blue Team almost the instant they exit their teleport, grabbing John-117 with a restraint field. However, his body is recalled by Cortana before he can do any harm. He spends the entire mission arguing with Cortana about the threat Blue Team pose, all while continuously attempting to assault Blue Team with legions of his bodies, all of which, save for three are stopped by Cortana. Cortana only allows him to continue his attacks to a lesser extent in order to stall Blue Team as she makes her preparations. After Cortana successfully captures Blue Team the Warden makes no further appearances in the game.

Despite their disagreement, the Warden remains loyal to Cortana, and later on, leads an assault on a UNSC ship called Sentry of Elmoro.

The Warden Eternal appears as a boss in both the campaign and multiplayer of Halo 5: Guardians.

There are six fights with the Warden Eternal across five of the game's eight missions. The last two fights are against two and three Warden Eternals at once respectively. There also exists an Easter-Egg in the game's first level which initiates an extra hidden boss fight.

The Warden Eternal appears as a simulation in the Warzone and Warzone Firefight multiplayer modes. He appears on most of the mode's maps. In Normal Warzone he appears as a boss worth 150 points toward victory and most commonly appears near the end of marches. In Warzone Firefight he has a chance to appear as the objective boss of a round, often in groups of 3. Also exclusive to Warzone Firefight are more powerful "Legendary" and "Mythic" variants which are colored red and Blue respectively.

Warden's attacks are his face-laser which can disable vehicles, a dark orb-like projectile which tracks targets and seems to bend light, a stomp which creates a shockwave, and his sword. Almost all of his attacks are capable of taking a player down in a single hit. The Warden's main weak point is the slipspace bubble on his back, however, he can also be "assassinated" with a melee to the back during certain intervals, which initiates an execution animation.

The Warden also has some rare joke dialogue as Easter Eggs which can be made more common though in-game collectibles. 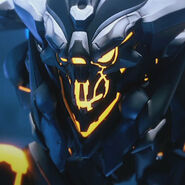 The Warden Eternal, as shown in Warzone