Warden Ranken is the main antagonist of Batman: Arkham Knight's The Season of Infamy DLC Most Wanted mission Beneath the Surface.

He is voiced by Dee Bradley Baker who also voices Ra's al Ghul in the same series, Perry the Platyborg,  Sunny Jim, and Klaus Heissler.

Ranken was the warden of Iron Heights. He was hired to capture Killer Croc, whom he eventually tracked down to an abandoned lighthouse at Gotham. After capturing Killer Croc, Ranken began experimenting on him. During the experiments, Ranken realised that Croc had remarkable regeneration.

To test them, Ranken severed Killer Croc's arm with a buzzsaw and over the course of weeks the arm fully regrew. Eventually the tests were successful enough that Ranken intended to splice various prisoners' DNA with that of Croc, hoped to replicate Croc's regeneration factor, and also awaited for the recombination of the DNA to stabilize before continuing. However, the tests caused Killer Croc's mutation to escalate rapidly and, more powerful then ever, Croc managed to break free and destroyed the airship's engines, causing it to crash into the Gotham Bay.

After Batman is informed about the airship's crash, he heads to the bay to investigate. Inside he finds multiple wounded guards as well as the warden, who is trapped in the water underneath an iron grid. Batman removes the grid and pulls the warden out of the water, but suddenly Croc jumps out of the water and grabs Ranken before fleeing deeper into the wreckage, dragging the screaming warden with him. Batman follows Croc to save Ranken. On the way, Batman finds multiple video tapes which explain detailed which horrible experiments Ranken performed on Croc and the prisoners.

Eventually, Batman confronts Croc, who has strapped Ranken to the chair in which Croc was trapped during the experiments. Croc, who has rallied a crowd of former Iron Heights inmates to his side, demands that Ranken somehow fixes the mutation his experiments caused. Ranken reveals that he can't reverse the mutation because it is the result of adaptive trauma. Batman intervenes before the furious Croc can hurt the warden and together with Nightwing he defeats the prisoners and Croc.

After he is freed from the chair, Ranken thanks Batman for saving him and claims that they should kill Croc. However, Batman tells Ranken that he is the true monster there and delivers him to the GCPD where Ranken, much to his shock, is imprisoned in the cell next to Killer Croc and begged Batman to let him out of there as he didn't want to be next to Croc.

Batman then demanded to know the names of who specifically hired Ranken for experimenting on Croc, as he learned about the Quorum's involvement in his capture and experimentation of Croc. Ranken, however, smugly told him that he wasn't concerned with the Caped Crusader's wants before he told him to run along. Batman vowed that he'd talk eventually as "they always [talk]." Ranken then smugly told the Dark Knight that he loved invalidating a flawed hypothesis due to him being a scientist. Croc later asked whether Ranken would ever get justice, with Batman saying that he'd get justice, although Croc was not satisfied, as he wanted to kill him as payback for what he did to him. 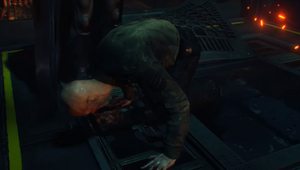 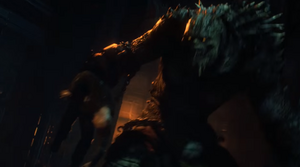 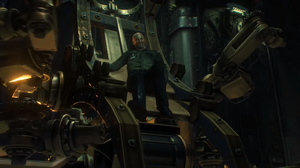 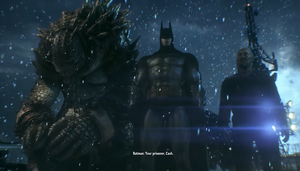 Batman turns in Croc and Ranken