riding in the forest and taking hostage creatures, turning them into ice

Freezing Dungeon Master and other creatures and bringing them to Venger.

Barbarian
Warduke is a a classic Greyhawk and Mystara villain turned minor character who appeared in the series Dungeons and Dragons.

Warduke's first appearance is as a premade character in the Dungeons & Dragons module Quest for the Hearthstone . The Dungeons & Dragons accessory, The Shady Dragon Inn , provides a number of details on Warduke and other characters in the AD&D toy line. Originally a close friend of Strongheart the paladin, the two became mortal enemies when exposed to a magical item called the Heartstone, which brought Warduke's cruel nature to the fore. He is a close ally of a woman named Skylla, an evil wizard. Warduke is loved by one woman, a formerly good cleric named Raven, and hated by another, a good cleric named Mercion. He works under the evil Sorcerer Kelek, but he and Skylla plan to overthrow him once all the good fighters are defeated.

Warduke came to prominence after the Greyhawk Wars, spreading terror among the soldiers, fighting societies, and mercenaries of the Flanaess to the Barrier Peaks . Warduke was quickly recruited by the Horned Society to aid in their rebuilding, and was eventually made a Hierarch himself. Thanks to striking many deals with otherwordly fiends, Warduke has amassed a formidable assortment of magical weapons and armors.

He wields a shield and was hired by Venger,send ino the Forest to kidnap Dungeon Master,freeze him with his Magic Sword in an Ice Block with the help of an army of Monsterfrogs.The Kids follow Warduke into his Cave and rescue Dungeon Master fighting Venger and him. Dungeon Master then comes out from his prison as Warduke´s Magic Sword hits on the ice block, breaks him free sending Venger out from the Cave. Warduke and his Frogmonsters also flee and are never seen again.

Warduke has a flaming sword, a magic shield that can repel spells,a poisonous dagger, adamantine armor and a magic helmet that gives him infravision. He has also a talent in making deals and teaming up with monsters and otherworldy fiends.

He is a very skilled swordsman and assassin. 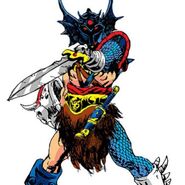 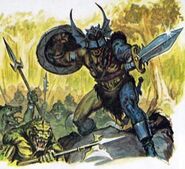 Add a photo to this gallery
Retrieved from "https://villains.fandom.com/wiki/Warduke?oldid=3892693"
Community content is available under CC-BY-SA unless otherwise noted.