The Warehouse Goons are a group of supporting antagonists appearing in the Phineas and Ferb special "Phineas and Ferb Save Summer". They were presumably hired by Aloyse Von Roddenstein to serve as bodyguards to look out for intruders in the warehouse during L.O.V.E.M.U.F.F.I.N.'s plot to rule the world.

Upon learning that Heinz Doofenshmirtz has created an -inator that successfully moved the Earth into an early autumn, Roddenstein (or Rodney for short) leads L.O.V.E.M.U.F.F.I.N. into taking over the world by creating an -inizor (which is just ten times bigger and stronger) that will send the Earth into a new Ice Age. As such all of the L.O.V.E.M.U.F.F.I.N. villains managed to round up and capture the O.W.C.A. agents and confine them in their warehouse hideout. Following the agents' capture and the successful takeover of Danville City Hall, Rodney hired the five goons to act out as bodyguards and watch out for intruders.

However, Perry the Platypus, Monty Monogram and Carl Karl decided to rescue the captured agents, so they infiltrate into the warehouse, where they spot four of the goons communicating. At first, Monty and Perry decide to take the four goons out, but when the fifth goon arrives (resembling to be a cave troll because of his enormous size surpassing the other ones), Monty and Perry decided to run off from the scene. As the goons chase the two, Monty and Perry split up, with the first four goons chasing down Monty while the cave troll goon is chasing down Perry.

Monty manages to lure the four goons into a tightened room, where Carl locks them up after Monty exits from the room. As for Perry, he faces the wrath of the cave troll goon, who throws him over to the other side of another room. Spotting several tranquilizer darts, Perry uses a rubber band to shoot the darts at the goon's butt, incapacitating the latter and causing him to fall asleep.

It is unknown what happened to the goons after the L.O.V.E.M.U.F.F.I.N. villains have fled following their defeat while Rodney ends up being arrested in the end. 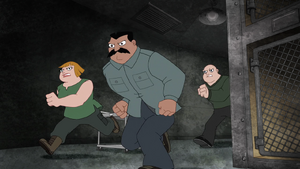 The goons pursuing Monty and Perry throughout the warehouse. 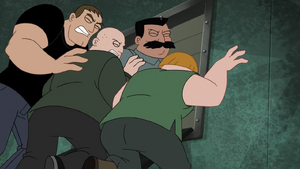 The first four goons being trapped in a tightened room by Carl. 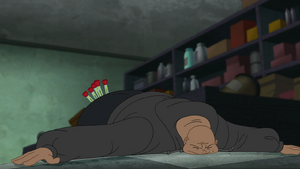 The fifth goon being tranquilized with sleeper darts by Perry.
Add a photo to this gallery

Retrieved from "https://villains.fandom.com/wiki/Warehouse_Goons?oldid=3939743"
Community content is available under CC-BY-SA unless otherwise noted.