Warhawk is the overall secondary antagonist and the final boss in Twisted Metal: Black.

Warhawk was voiced by Adam Segan.

Warhawk is a law enforcement officer in an Armored Helicopter. He was supposed to be a playable character in TM:B, but he was too powerful, so he was scrapped.

As stated above, Warhawk is the final boss of Story Mode of Twisted Metal: Black. It begins as, Warhawk attempts to arrest the player and ordering the player to surrender; however the player refuses. Thus begins the battle with Warhawk.

The first phase of fighting Warhawk is that he will have a shield and you will do no damage to him. There will be tanker trucks that will come and you will have to destroy them while Warhawk is close by. Do this a few times and Warhawk will lose his shield. The next phase includes attacking Warhawk. Attack him until he dies. A cutscene will then play showing the helicopter blowing up with the pilot flying towards the camera. 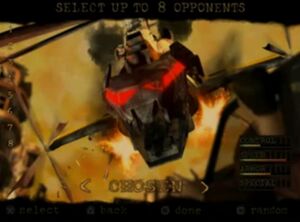 Retrieved from "https://villains.fandom.com/wiki/Warhawk?oldid=3621074"
Community content is available under CC-BY-SA unless otherwise noted.