Take over Earth with the Lowardian armada (failed).

Warhok is the final antagonist of Disney's TV series, Kim Possible. He serves as one of the main antagonists in the series finale "Graduation". He is the oppressive leader of the Lorwardian Invasion and Warmonga's hot-tempered compatriot.

He was voiced by Ron Perlman, who also played Xibalba in The Book of Life, the High Mage in the 2003 Teenage Mutant Ninja Turtles cartoon series, Slade in Teen Titans, The Lich in Adventure Time, Nino in Drive, Sozin in Avatar: The Last Airbender, Nicola in Bunraku, Pap Finn in Huckleberry Finn,

Warhok is a giant male green-skinned alien from the planet Lorwardia, a warrior standing somewhere around 10 to 12 feet tall. What is known about his backstory before his debut was not detailed much. He and his "battlemate" Warmonga battled side by side. It is implied that he is also a hunter and has a trophy collection as he and Warmonga went on their first hunt for a creature called a Thorgoggle on the moon of Parfa, from which Warmonga kept its spine as a trophy.

He appears when he kidnaps Kim Possible and Dr. Drakken and transported them onto his ship, after hearing about Warmonga's misadventures on Earth thanks to the two. Preparing for revenge, Warhok and Warmonga commanded an invasion force to conquer the seemingly primitive Earth. Warhok is finally defeated when Ron Stoppable manage to tap into his dormant Mystical Monkey Powers and defeat him and Warmonga in single combat; throwing them headlong into their crashing spacecraft just before it explodes. His ultimate fate was never confirmed, even though it is intimated that he was killed with Warmonga.

It is unknown if he ever figured out or surmised that Ron may have been The Great Blue that Warmonga had been looking for before they both were defeated.

Warhok's cruelty knows no limits. After the failed invasion, out of pure anger, he intends to kill Kim and have her stuffed and mounted. He is more ruthless and uncharitable than any villain that Kim and Ron have faced, being one of the few to attempt to kill both Kim and Ron and the closest to taking over the Earth. Warhok could very well be the most dangerous enemy that Kim and Ron have ever faced.

It is unknown if he is as devoted as Warmonga to finding the Great Blue. 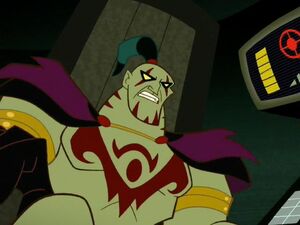 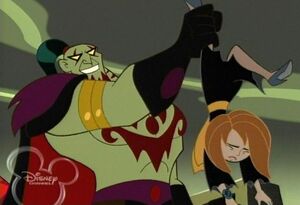 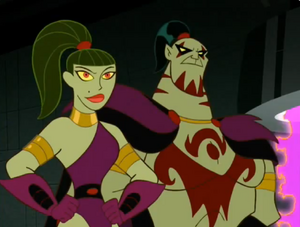