Warlord
Member of the Defenders

Conquer both Atlantis and the Earth.

Krang, also known as Warlord Krang, is an enemy of Namor.

Krang grew up in Atlantis and soon became an accomplished and high-ranking military officer. He soon fell in love with Lady Dorma, who was drifting from her true love, Prince Namor, who, unbeknownst to her, had amnesia on the surface world at the time. Krang entertained notions of overthrowing the throne, and when Namor regained his memories, Krang offered his services as warlord under Namor's rule of Atlantis. Then, when Namor was gone for an extended absence, Krang stepped in and seized the throne, ruling as a despot and turning Namor away. 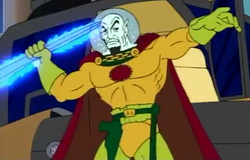 Retrieved from "https://villains.fandom.com/wiki/Warlord_Krang?oldid=4207751"
Community content is available under CC-BY-SA unless otherwise noted.