Villains Wiki
Register
Don't have an account?
Sign In
Advertisement
in: Partners in Crime, How To Train Your Dragon Villains, Fantasy Villains,
and 40 more

Authority over the Northern Alliance

Use Toothless to control all of the other dragons, so that they can conquer the world.

The Warlords (real names: Ragnar the Rock, Griselda the Grievous and Chagathai Khan) are major antagonists in How to Train Your Dragon: The Hidden World.

They are a trio of dimwitted warlords who have hired Grimmel the Grisly to give them Toothless so that they can use him to conquer the world after the demise of their leader Drago Bludvist.

Not much is known about the Warlords other than they have taken over the Northern Alliance following their leader, Drago Bludvist's defeat one year ago. Having problems with the Berkian Dragon Riders, who mess with all their operations, they hire the renowned dragon hunter Grimmel the Grisly to capture Toothless so they can use the Night Fury to control all other dragons, and conquer the world through it.

The Warlords are first seen discussing their plans with Grimmel. Later on, they are seen after the Berkians evacuated Berk, having found the island empty and destroyed following Grimmel's attack the previous night, where his Deathgrippers burned the town. Griselda asks Grimmel how Toothless could have escaped once again, and Grimmel reveals that he discovered that the Berkians are heading west. He then explains his plan to capture all the dragons, though they're not amused by Grimmel's twisted sense of humor. 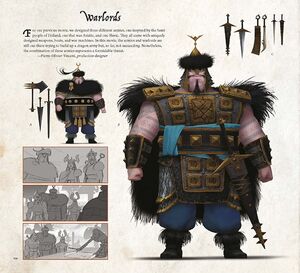