Warmonger is the secondary antagonist of the cartoon series Mighty Max, which was based on the toyline of the same name. He is Skullmaster's right-hand man and a red-skinned humanoid demon creature. Although he is generally loyal to Skullmaster, he still wants to be the leader.

At some point, after being sealed deep within the earth, Skullmaster sealed the reigning king, Lava Lord, into solid rock and took control of his minions, with Warmonger as their leader.

In the first season, Warmonger's role is limited, mostly relegated to the background and ordering Skullmaster's minions. In the second season, he is confirmed to be Skullmaster's second-in-command and appears far more, aiding his master in the latter's conquest. However, Warmonger grows more power hungry over time and eventually tries to kill Skullmaster. He seemingly succeeds only to find himself not knowing what to do with his new position. Skullmaster is later revealed to have faked his death and congratulates Warmonger for being an excellent servant. In the final battle, Warmonger is killed by Skullmaster using his Crystal of Souls. However, after Max rewinded the timeline back to the beginning of the series, it's presumed that Warmonger comes back to life and is re-trapped deep within the earth with Skullmaster.

The dim-witted Warmonger usually finds himself doing Skullmaster's dirty work, but also enjoys the positions of relative power this gives him over other henchmen. Cruel and sadistic, Warmonger briefly showed ambition when he tried to kill Skullmaster. Believing himself successful, the short little demon then found himself at a loss as to what to do with his newfound power and position. The death of Skullmaster proved to be a ruse, however, and the master was proud of his pupil for showing such deviousness. 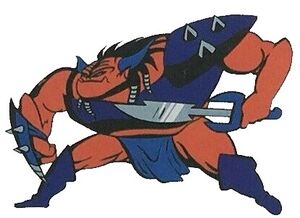