Stealing whatever he wants.

Thief
Emil LaSalle, better known as Warp, is a villain in the DC comics and an enemy of Doom Patrol and the Teen Titans. He has the ability to time-travel and steal anything he desires. He is a French villain who uses teleportation via his suit. He was later recruited by the Brotherhood of Evil.

Warp first appeared when he arrived from the future and stole a clock machine, but the Teen Titans fought him and attempted to defeat him. As Warp started to time-travel back to the future, Starfire attacked him and pulled his vortex out of his chest, causing Starfire to land in the future, where it was snowy. Starfire found her friends, who were aged, but they were no use against Warp. Starfire was the only hope to fight Warp. Suddenly, a dark figure appeared, turning out to be Nightwing. As the other Teen Titans got their message, they joined Starfire and Nightwing to fight Warp. Just as Warp attempted to time travel, Nightwing defeated Warp and was reduced to an infant.

During the events of the Brotherhood Of Evil, Warp reappeared back to his adult self, he became a member of the Brotherhood of Evil. He was sent along with See-More to capture Herald, but they failed and got defeated. Later on, during the final battle, he was defeated again by Thunder, before to retreat he was resolved to self-destruct and presumed dead (not needing to be flash-frozen).

He later appeared in the live action show Smallville as a member of the Suicide Squad helping Rick Flag on a mission. In this show he is played by Elias Toufexis. 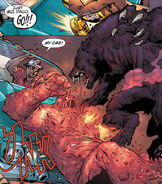 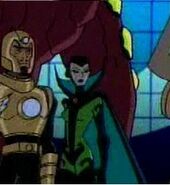 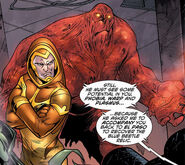 Retrieved from "https://villains.fandom.com/wiki/Warp?oldid=3804032"
Community content is available under CC-BY-SA unless otherwise noted.