Help Emperor Zurg take over the galaxy by utilizing the Uni-Mind (failed).

Warp Darkmatter, also known as Agent Z, is the secondary antagonist (and sometimes an anti-hero) of the Disney animated series Buzz Lightyear of Star Command (based on the fictional show from Toy Story). He was once a respected space ranger of Star Command and the best friend/the greatest partner of heroic legend, Buzz Lightyear, until he was revealed to be a secret agent for Emperor Zurg and is the traitor of Star Command. Afterwards, he has served as Zurg's second-in-command and enforcer, doing all sorts of dirty work for him. He also appears as the secondary antagonist of The Adventure Begins.

He was voiced by Diedrich Bader, who also played Oscar in Ice Age, Tank Evans in Surf's Up, and Hoss Delgado in the Grim Adventures of Billy and Mandy.

At the beginning of the film, Buzz Lightyear and Warp Darkmatter were partners as well as best friends (or so Buzz thought), sent by Star Command in order to search for three missing Little Green Men, stumbling upon one of the Zurg Empire's secret bases on an uncharted moon, where the Evil Emperor himself tortured the LGMs for information about their mind-link. Buzz and Warp then rescued the LGMs, however, forcing Zurg to escape, leaving his army of Hornets to attack and activating the self-destruct sequence on his way out. In the chaos, Warp was pinned under some debris and Buzz attempted to save him, but Warp insisted Buzz to leave without him, pressing a button to force him to escape while he was caught in the explosion, leaving the devastated Buzz to presume that he's dead.

Later, Zurg had gained a new henchman named Agent Z (with the help from Brain Pods and Grubs), who leads several Hornets to attack the homeworld of the Little Green Men in order to steal the Uni-Mind, the mystical orb which psychologically connected all LGM-kind. Despite the best efforts of Buzz and his new robot partner, XR, Agent Z trumped them with his impressive skills and cybernetic arm which housed a multitude of dangerous weapons, allowing Zurg and his forces to make off with the Uni-Mind in order to use it to mentally enslave the entire galaxy.

Later, when Buzz invades Planet Z, Agent Z battles Buzz, but Buzz manages to defeat Agent Z and hold him at laser point. It was then that Agent Z removes his helmet and reveals himself to be Warp Darkmatter, shocking Buzz long enough for the latter to punch him unconscious. When Buzz regains consciousness, Warp reveals that he had been working for Zurg ever since his training days at the academy, serving as a spy within Star Command until he had learned of the Uni-Mind's existence. Warp also revealed that the previous kidnapping of the LGMs and the self-destruction sequence were nothing but ruses to fake his death in order to sever his ties with Star Command, and that he finds the epitome of evil to be more fun and profitable. This leaves Buzz so shocked and furious of the fact that he considered Warp as a close friend. Zurg then taunted Lightyear on his naive friendship with Darkmatter, and then plans to use the corrupt Uni-Mind to enslave him as well. However, Buzz is rescued by XR and Star Command's janitor, Booster. Zurg orders Warp to kill Lightyear, but was knocked down by Tangean Princess, Mira Nova, disguised as a hornet. When XR and Booster crash-land, Warp tries to take a shot at them, but Mira ejects Booster out of the ship and onto Darkmatter, pinning him down and bruising his ego.

Warp is then cuffed to a pole and begs for help when Zurg's laser begins to detonate. He is then escorted by Booster and XR, becoming scared when they parachute off the building to safety. Meanwhile, Buzz and Mira restore the Uni-Mind by phasing Buzz into it. Warp believes Buzz to be dead at this point, only to be disappointed when he turns out alive, thus foiling Zurg's diabolical plans for conquest. With Zurg's plot foiled, Warp is taken into custody by Star Command afterwards.

In the TV series, Warp has escaped from prison and continues working as Zurg's right-hand man while trying to eliminate Buzz in revenge for foiling his plans. Many of Zurg and Warp's plots involve the creation of the vampire robot Nos-4-A2 (who would later rebel against them in later episodes), stealing a powerful gas that would devolve anyone who smells it, and kidnapping XR to gain access of Star Command's intelligence. It is also revealed that during his training days at the Academy, Warp had secretly supplied Zurg with stolen armory and intelligence from Star Command in exchange for profit, and that he currently owns an unnamed moon as a vacation resort during personal days.

Despite being Buzz's current rival, Warp holds a sense of honor, as in the episode "Tag Team" where he and Buzz are forced to make a truce after they are both fitted with implants by Chlorm Scientists that start to interfere with their lifestyles, and in a brief moment of conscience, Warp saves Buzz from being dissected by the scientists. In the episode "Ancient Evil", he assisted Buzz in defeating the ancient Natron as revenge against the latter for nearly draining his life force.

From an early age, Warp is evidently the type of person to stoop to any means necessary to achieve his goals. He isn't above cheating or stealing to get his way, but he is extremely obstreperous and defiant when he screams in a high-pitched voice. He is also somewhat picky and fastidious about his appearance, and seems to prefer taking the easy way out of situations. He is also extremely contemptuous, sarcastic, and snide, ready to dish out opprobrious remarks when he is up for the task. Despite his many flaws, he has as Buzz said "a good guy just trying to get out in him," as he has saved Buzz a few times and deep down cares about him due to their former friendship.

Before his betrayal was revealed, Warp Darkmatter was considered one of Star Command's finest rangers, with strength, skills and cunning almost equal to Buzz Lightyear himself. After going to work for Zurg full time, Warp's organic right arm was replaced with a cybernetic attachment. With it, he can transform it for various needs such as: flamethrower, plasma cannon, and metallic claws. He can also shoot bombs from his shoulder. 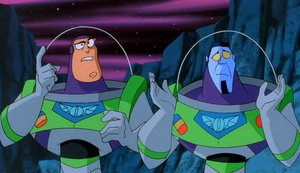 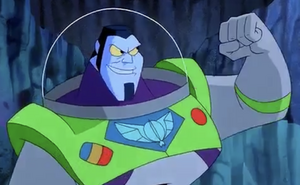 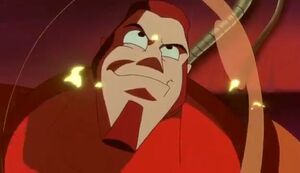 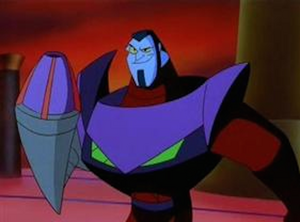 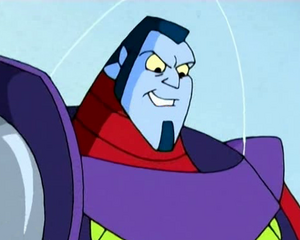 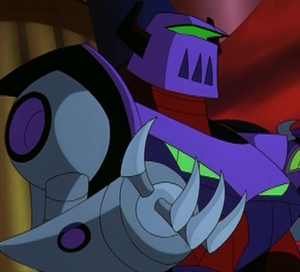 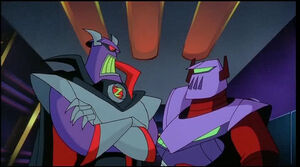 Warp (as Agent Z) with Zurg. 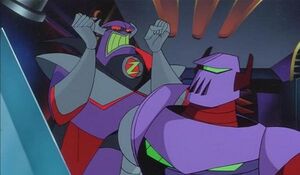 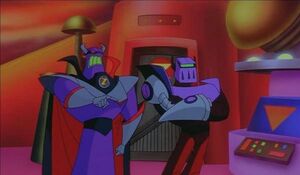 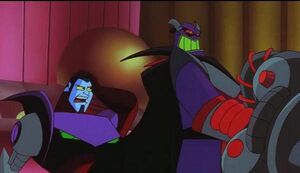 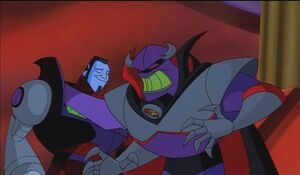 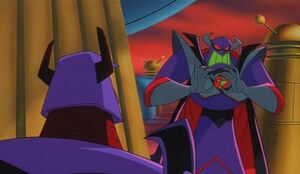 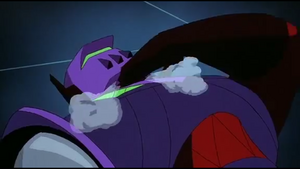 "Oh, come on buddy, that's no way to treat your partner." 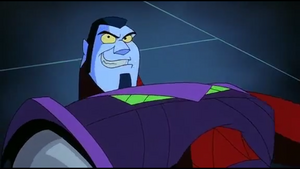 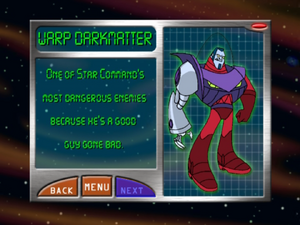 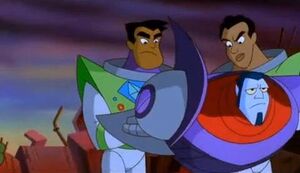